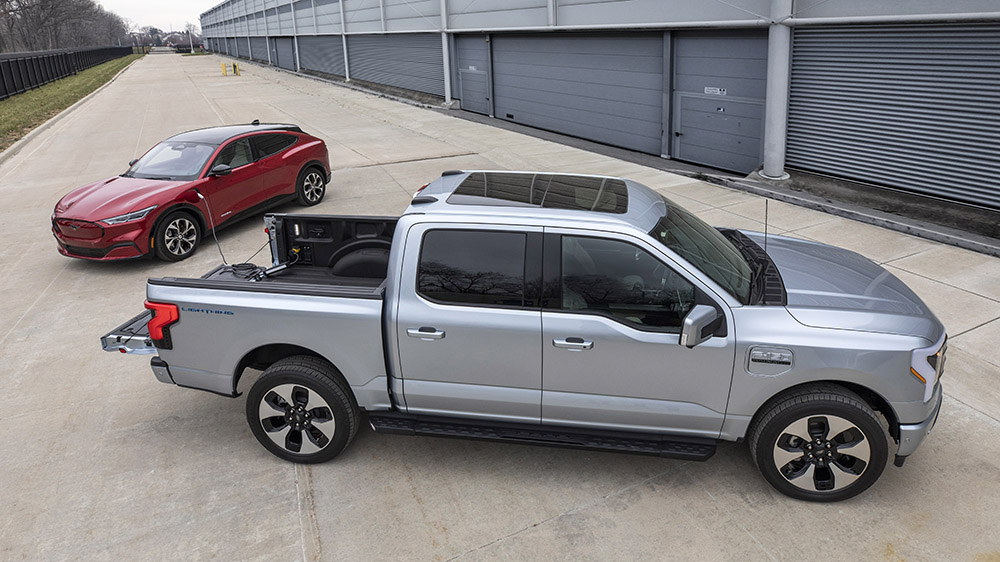 The Detroit automaker has just announced its eagerly anticipated all-electric pickup will be able to charge other EVs. You won’t need a special accessory to take advantage of the feature, either—just your charging cord and an adaptor.

F-150 Lightning and F-150 Powerboost hybrid drivers will be able to “share” power with other electrified vehicles—even those not made by Ford—thanks to Pro Power Onboard generator, according to a press release. All you need to do is connect one end of the Ford Mobile Power Cord to the truck’s 240-volt Pro Power Onboard outlet and the other end to a L14-30P to 14-50R adapter plug (which you can buy on Amazon for around $25), and you’re good to go. Charging times aren’t exactly fast, but Ford says you can add 20 miles to the Mustang Mach-E Extended Range RWD in an hour and 13 miles to the F-150 Lightning over the same period of time.

Now, that doesn’t mean you should use your F-150 Lightning as a dedicated EV charger (there’s a lot more fun that can be had with the vehicle, after all). As with the hybrid version’s ability to help keep the essentials in your house running during a power outage, Pro Power Onboard is meant to be used in case of an emergency or when someone you know needs a hand. Think of it as the electric version of a jump start, with just enough range to hopefully get you a charging station.

“There are hundreds of benefits to Ford Pro Power Onboard—and we’ve added one more,” Patrick Soderborg, Ford e-powertrain systems engineer, said in a statement. “Taking power on the road or having extra energy at home brings a lot of convenience and security, and using the F-150 Lightning or F-150 hybrid to top off a friend’s electric vehicle or help them during an outage is one of the many new benefits our customers gain from our Built Ford Tough electrified trucks.”

Vehicle-to-vehicle charging may be a new technology, but it isn’t exclusive to the Ford F-150 Lightning. It will also be available on the Hyundai Ioniq 5 hatchback, which is set to launch next year before the pickup. We wouldn’t be surprised to see the feature pop up on more EVs in the years to come, either, especially on pickups and utility vehicles like the Tesla Cybertruck and Mercedes-Benz EQG.

If we continue at this pace, range anxiety will soon be a quaint memory—like cell phones too slow to surf the internet.