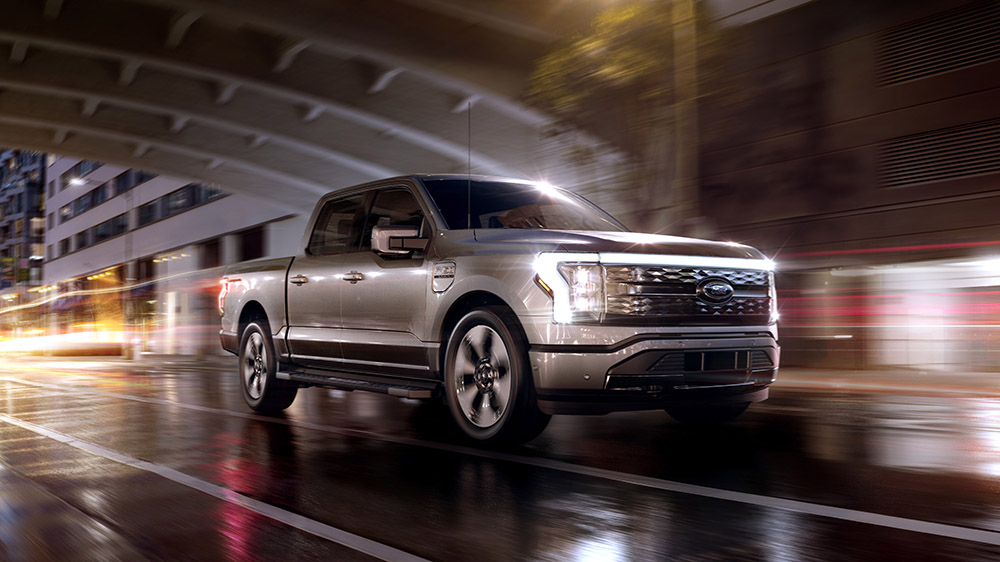 Although their popularity has grown by leaps and bounds over the last decade, EVs haven’t gone mainstream just yet, accounting for just 1.8 percent of US car sales last year. But their time may have finally be upon us thanks to Ford and the new F-150 Lightning.

A day after it made a cameo during President Joe Biden’s visit to the automaker’s Dearborn, Michigan manufacturing plant, the eagerly anticipated, all-electric pickup made its official debut during a live stream event on Wednesday evening. The truck isn’t just a big deal because it’s a high-profile EV from one of the world’s biggest automakers, it’s also a battery-powered version of the most popular vehicle in America.

Following in the footsteps of the Mustang Mach-E (and the E-Transit van) before it, the Lightning takes one of Ford’s most beloved nameplates and turns it into a completely electric vehicle. Unlike the Mach-E, though, which is a crossover SUV rather than a muscle car, the Lightning is a straight-up F-150 pickup, only with zero emissions.

“For both Ford and the American auto industry, F-150 Lightning represents a defining moment as we progress toward a zero-emissions, digitally connected future,” Bill Ford, the automaker’s executive chair, said in a statement. “F-Series is America’s best-selling truck for 44 years, the backbone of work across the country, and a trusted icon for generations of customers. Now we are revolutionizing it for a new generation.”

First spied during President Biden’s Tuesday speech, the Lightning doesn’t look all that different from the current gas and hybrid F-150s. Closer inspection reveals a subtly futuristic design, though. First, there’s the more simplified grille, which is bordered by a striking LED lightbar, similar to the one seen in the rear of the vehicle. Second is a smoother, more sculpted exterior, which Ford claims makes the Lightning the most aerodynamic F-150 yet, despite retaining the gas version’s four-door SuperCrew cab and bed dimensions. Finally, the truck rides on a set of sporty, six-spoke 18-inch wheels.

Inside the Ford F-150 Lightning  Ford

Things aren’t radically different inside, either, but you will find a 12-inch instrument cluster with a customizable interface within the driver’s cockpit and a giant 15.5-inch infotainment screen in mounted on the dash. The smart SYNC 4A system promises to adapt to driver behavior and gives you access to some of the Lightning’s more forward-thinking features, like BlueCruise, which promises hands-free driving on over 100,000 miles of highway in the US and Canada. There’s also Onboard Scales, which estimates payload size and how it will affect your battery range, and Ford Pass, which provides seamless access to charging stations. The absence of a combustion engine also means you’ll have an additional 400 liters of storage space in the frunk, enough for two carry-ons and a checked bag or two full sets of golf clubs.

It’s More Powerful Than the Original

The Lightning may not produce any emissions, but that doesn’t stop it from packing a punch. The all-electric truck will be powered by a dual-motor powertrain that the automaker claims will be able to produce 563 horsepower and 775 ft lbs of near-instantaneous torque. Thanks to this, the truck will be able to accelerate from zero to 60 mph in the mid-4-second range. These figures are just targets right now, but they would make the truck the most powerful F-150 model and the quickest (yes, even quicker than the popular F-150 Raptor).

Just as important as these numbers, though, are payload and towing capacity. The standard-range Lightning will be able to carry a maximum payload of 2,000 pounds, which is standard for a base F-150. When equipped with an extended-range battery and the Max Tow Package, the truck will be able to tow a staggering 10,000 pounds, which makes it one of the strongest F-150 based on 2021 model technical specs. That number would put it on par with the dual-motor Tesla Cybertruck, too.

When it’s not towing anything, Ford targets a 230-mile range for the standard Lightning and a range of 300 miles for the extended-range model. You’ll also be able to use the truck’s lithium-ion battery—the size of which has not yet been revealed—to charge power tools and as a generator. That’s something that F-150 Hybrid owners in Texas learned can be a godsend in times of need. Topping up the truck at home should also be a breeze thanks to an included 80-amp charging station that can add an average of 30 miles of range per hour and fully charge the truck from 15 to 100 percent in roughly eight hours. On the road, you’ll be able to add 54 miles in 10 minutes using a DC fast charger, and go from a 15- to 80-percent charge in about 40 minutes.

Don’t get it twisted. Electric doesn’t mean precious. Like its gas-powered sibling, the Lightning will be a brute that can take a beating. The EV’s two in-board motors are placed on each axle, making four-wheel-drive standard. The 4×4 system includes four different drive modes, too: normal, sport, off road and tow/haul. Thanks to this, you should be able to use the Lightning for almost any task you can think of.

The battery-powered truck features a military-grade aluminum alloy body and a special reinforced frame, specifically designed to support its advance battery tech. There’s also unique underbody protection to further protect the battery. The Lightning is also the first F-Series truck to include an independent rear suspension, which will improve handling on the road and reduce steering roll.

How Much It Will Cost and When You Can Buy One

Although an official date has yet to be announced, the F-150 Lightning is expected to arrive in dealerships during the middle of next year. The automaker did announce that the standard-range model will start at $39,974, before any federal or state tax credits, while pricing for the mid-range model begins at $52,974. We’re still waiting for more info on different trim levels or a launch edition, so don’t be surprised if it ends up costing a bit more when it first goes on sale.

Still, the figures quoted by Ford are less than the launch prices for the Lightning’s principal competitors, the GMC Hummer EV (the Edition 1 will start at $112,595) and the Cybertruck (which will initially be available for $69,900). It appears that, even in the electric era, Ford has no plans to relinquish the highest-selling truck title without a fight.