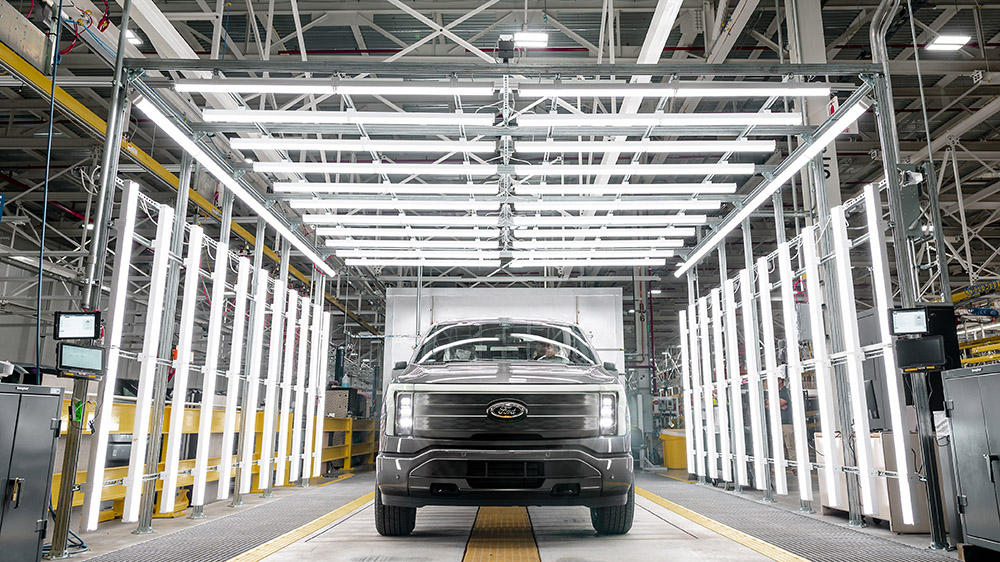 The Detroit giant announced that production of the F-150 Lightning electric truck has started at its Rouge Electric Vehicle Center in Dearborn, Michigan on Tuesday. The news represents an important milestone for the company as it transitions from gas-powered vehicles to those powered purely by electricity.

Ford already proved it could build a successful EV with the Mustang Mach-E SUV, but it wasn’t until last year’s debut of the F-150 Lightning that the company showed it could apply EV technology to one of its most beloved models—and its best-selling vehicle for the last 45 years. With such a strong and passionate base, Ford probably could have gotten away with just sticking an electric drivetrain in the vehicle, but it instead set out to push the electric model forward. The zero-emission pickup is the fastest-accelerating F-150 yet, can tow a maximum of 10,000 pounds and travel up to 300 miles on a single charge. Its battery can also be used to charge other EVs and even power your house in an emergency.

Initial response seems to be more intense than Ford was expecting. The automaker has already received over 200,000 reservations for the battery-powered truck, which starts at just $40,000 but can cost up to $97,249, with added bells and whistles. Because of the interest in the vehicle, Ford has announced it will ramp up annual production to 150,000 units by the end of 2023, according to a press release. This has led some at the company to compare the F-150 Lightning’s launch to that of another iconic Ford over 100 years ago.

“Today we celebrate the Model T moment for the 21st Century at the Rouge Electric Vehicle Center,” the company’s executive chair, Bill Ford, said in a statement. “The Rouge is where Ford perfected the moving assembly line, making it a fitting backdrop as we make history again. The stunning anticipation for F-150 Lightning is a credit to the work of our Ford engineers and designers, and the UAW team members who are building these trucks with pride.”

Unfortunately, if you haven’t already reserved your F-150 Lightning you may be in for a long wait. On Monday, Autoblog reported that Ford had already closed the order books for 2022. (The automaker did not immediately respond to a request for comment from Robb Report.) And you can forget about finding one on the secondary market: Ford has taken steps to stop owners from re-selling the truck for at least a year in an attempt to stop prices from spiraling out of control. So, F-150 enthusiasts may have to wait until 2023 to get behind the wheel of a Lightning. But if the EV lives up to its early billing, we suspect they won’t mind.