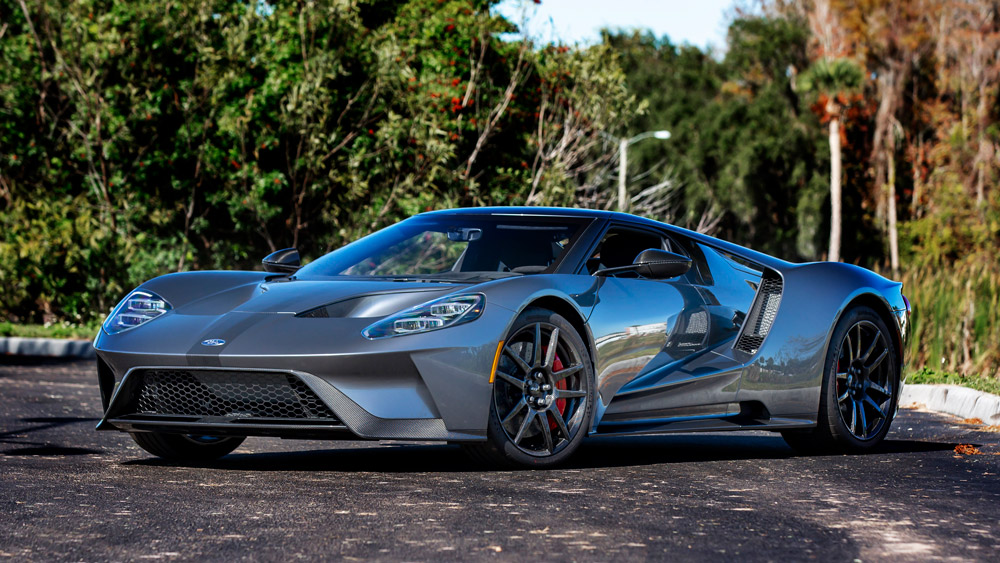 In 2016, exactly 50 years after Ford’s first momentous victory at the 24 Hours of Le Mans, the Detroit automaker returned to the 8.5-mile French circuit with the third generation of its revered GT and promptly beat Ferrari again, only this time the victory was relegated to the GTE-Pro class (it wasn’t an overall victory). Nevertheless, Ford’s performance at Le Mans just four years ago established the latest GT iteration’s dominance in its category; and due to their involvement in Ford’s racing program, the three drivers of 2016’s victorious Chip Ganassi Team USA each received one.

Frenchman Sébastien Bourdais, who was born and raised in Le Mans, requested that his GT be outfitted as a limited-edition Competition Series—one of only six examples built. During Mecum Auction’s upcoming event in Glendale, Ariz., which runs from today through March 14, Bourdais will offer that GT for sale. So, if you missed out on the 2017 Ford GT that sold during Gooding & Co.’s Amelia Island auction last Friday, this is a second chance at the model. While the one offered at Amelia Island sold for $967,500, Mecum’s specialists believe Bourdais’ consignment could command as much as $1.25 million when it rolls across the block on Saturday.

This Ford GT Competition Series will be auctioned on March 14.  Photo: Courtesy of Mecum Auctions.

Bourdais’ GT, one of only three Competition Series vehicles that remain in that limited configuration, sports carbon-fiber bodywork and is equipped with a 3.5-liter, twin-turbocharged V-6 engine capable of 647 hp and 550 ft lbs of torque. As such, the car features a lightweight interior with driver-focused elements that include an F1-style steering wheel with key functional controls and Ebony Alcantara upholstery. Because it’s a Competition Series GT, the car is also distinctive for what it doesn’t have—namely air conditioning, a stereo system, storage and cup holders.

Just how comparable is this car to the race car that enjoyed a victory lap at Le Mans? “It’s about as close as you’re going to get to it,” says Bourdais. “You’re sitting low and you see the fenders the same way, so in that respect it’s quite similar.”

Of equal significance, the car is equipped with features that the racing car was denied, though only because Ford had to adhere to FIA (Fédération Internationale de l’Automobile) and World Endurance Championships regulations. These components include a paddle-shifting, dual-clutch gearbox described by Bourdais as “super quick, but gentle;” an electronically adjustable dampening system with front lift capabilities (activated at the push of a button); five drive modes and two variable height ride systems.

“It’s a lot of car for a street car, that’s for sure,” says Bourdais. “It’s making almost 150 hp more than the race car, so with that extra power and a few of the things that the street car has that the race car doesn’t have, I wouldn’t be surprised if the lap times weren’t very different.”

Bourdais drove this example only 270 miles and considers it spectacularly versatile. “It has street-legal track tires, so you don’t need a trailer,” he says. “You can take it to the track, drive it there, and then drive it home.”

Obviously, a closed course is the ideal place for drivers to get the most out of this Competition Series GT. But as Bourdais experienced during his years of ownership, the car is aptly suited for the open road and it can deliver just as much enjoyment there. In his own words: “You don’t have to push it to enjoy it.”