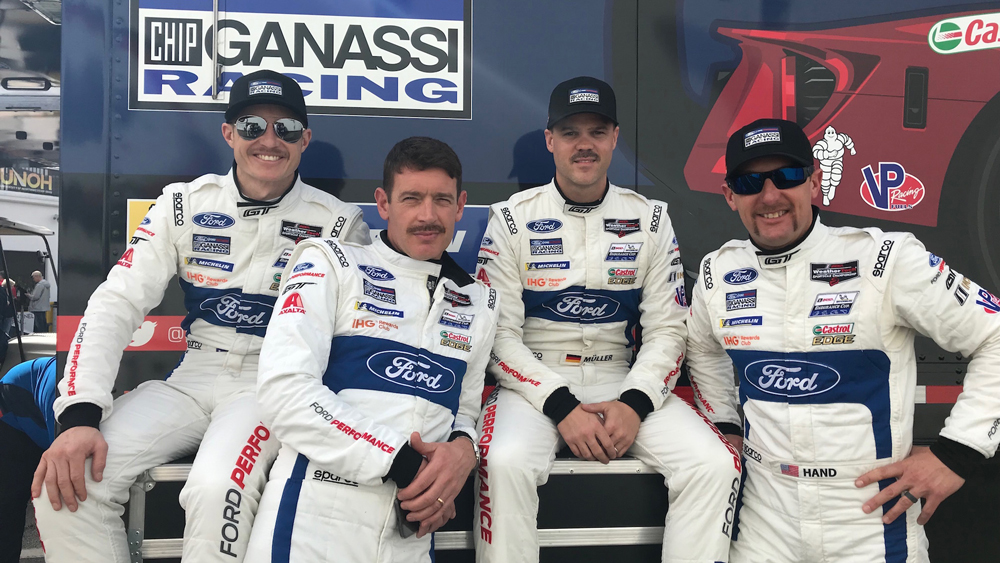 The notion that all things retro are cool again has seeped into all facets of life, including motorsports. While new liveries can be edgy, fun, and dynamic, few get as many approving nods as when a modern car wears an iconic scheme of yesteryear. The 2019 Rolex 24 at Daytona was no different, with plenty of teams throwing it back, but none embraced it as fully as Ganassi’s Ford GT crew.

The No. 67 and No. 66 GTs, which finished 1-2 in the GTLM class last year, were treated to vintage Castrol and Motorcraft liveries, respectively, for this year’s contest. In homage to those who manned and crewed those original entries, the Ganassi drivers, engineers, and managers all grew period-correct mustaches.

“When we saw the Motorcraft Mustang design they ran back in the ’80s, we started talking about all the great handlebar mustaches you’d see around the pits back then,” said Spence Hall, a Ganassi transport driver and fueler, sporting a strong handlebar and matching sideburns. “We figured we should do the same. Just about everyone participated, and when Ford heard what we were doing, they made us retro hats to match, right down to the braid on the brim.”

Ryan Briscoe, driver of the No. 67 car, struggled somewhat to join the fun. “I had to start back in November, because it takes me forever to grow anything on here,” he laughed, rubbing his mug, adorned by a faint mustache. “I’ve never worn one before, and I feel proud but also embarrassed. Mustaches are an iconic part of motorsports and I was hoping to get something like [Formula 1 champion] Keke Rosberg’s mustache, but I’m not coming close,” Briscoe chuckled. “[My codriver Richard] Westbrook wanted to model off [Formula 1 champion] Graham Hill, but it was too much work to get that pencil line done right. I’ve never talked to other guys so much about facial hair in my life.”

Joey Hand, driver of the No. 66 car, idolized his father’s handlebar while watching him race back as a kid. “I had to do him proud,” Hand told us, adding he started a text thread for all the drivers to share progress updates. “Westbrook sent the worst photos, with dark lighting and him just sitting in a chair,” Hand laughed. “I wanted to get to a level like Richard Petty. That was a thick, aggressive, facial broom. I didn’t quite get there, and that’s probably for the best. My wife and kids don’t like it. My son and I were having a serious conversation the other day and he stopped in the middle to tell me he couldn’t take me seriously with the mustache.”

The effort was a hit around the pits, with competitors coming by to snap pictures with the Ganassi crew. “Some of us promised we’d keep it until we lose, so if we win this race, we’re not going to shave” said Hall. Sadly—or perhaps fortunately for the likes of Briscoe— the Ford GTs didn’t clinch a victory.