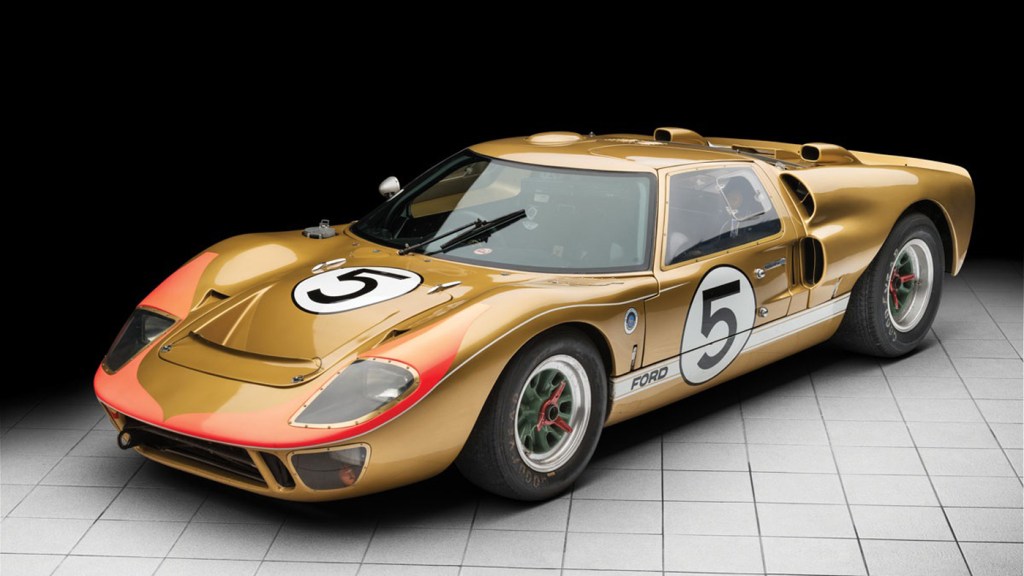 The Ford GT40 is one of the most iconic American racing machines of all time, and the 1966 model could be the most valuable and coveted of them all. From 1966 to 1969, Ford set about dominating the 24 Hours of Le Mans, all courtesy of the crushingly effective—and agonizingly gorgeous—GT40 racecar. Named for exactly how high it stood from the ground (40 inches), the GT40 has captured imaginations for more than five decades.

This example, chassis No. P/1016, is the very car that took third place during the 1966 edition of the French endurance race at Le Mans. After two years of gunning for victory, Ford finally made good on its promise to beat Ferrari, its bitter rival on the racetrack—particularly after the American auto giant failed in its earlier attempt to purchase the Italian automaker.

Painted in the original shade of Kandy Gold with Day-Glo highlights that it sported when recording a podium finish at Le Mans, the example recently took residence in the lobby of RM Sotheby’s Manhattan office. RM Sotheby’s car specialist, Jake Auerbach, led us on a tour of the car ahead of its upcoming auction during the annual Monterey Car Week in August.

The Ford GT40 gets its name from the fact that it is only 40 inches in height.  Photo: Courtesy RM Sotheby's.

Despite a pre-auction estimate set between $9 million and $12 million, Auerbach had no qualms about providing an in-depth look at the GT40’s inner workings. Tilting the rear engine cover backward is a two-person job—and once it’s raised, the beauty of the 427 cubic-inch V-8 engine is fully visible. The monstrous motor traces its roots back to NASCAR racing, not to mention a memorable appearance under the hood of the legendary Shelby Cobra.

While any GT40 is an amazing piece of machinery, Auerbach says the one on offer could represent the pinnacle of Ford’s low-slung racecar. “I think when you picture a GT40, it looks exactly like this car.” There were numerous iterations of the GT40, and, in time, even this example was modified to extend its racing life into 1967. Some of those modifications, including a revised dashboard and roll cage, remain today. During testing in 1967, with none other than Mark Donohue behind the wheel, P/1016 was clocked going 203 mph on the Mulsanne Straight at Le Mans.

Auerbach says this constant evolution and experimenting with new ideas is part of what makes the GT40 so special. “It’s such a unique approach to American racecar design,” he explains before offering us a seat behind the wheel.

Getting in is no easy task, though the doors conveniently take most of the roof with them when they’re open. Once you’re in, the seat hugs you firmly, and the aluminum dash—filled with toggle switches—looks more like something from the world of aviation.

The car’s current owner was not shy about using and enjoying this seemingly priceless car. Recent excursions to the Goodwood Festival of Speed, Goodwood Revival, and Le Mans Classic prove this candy-colored Ford has been enjoyed at high speed.

“It’s an intense experience, driving something like this,” says Auerbach. Though, he credits the car’s relatively simple and straightforward construction with making it “not terribly complicated or expensive to run” during similar historic racing events. Of course, this all hinges upon having the necessary means to put this incredibly valuable and historic racecar in your collection in the first place.