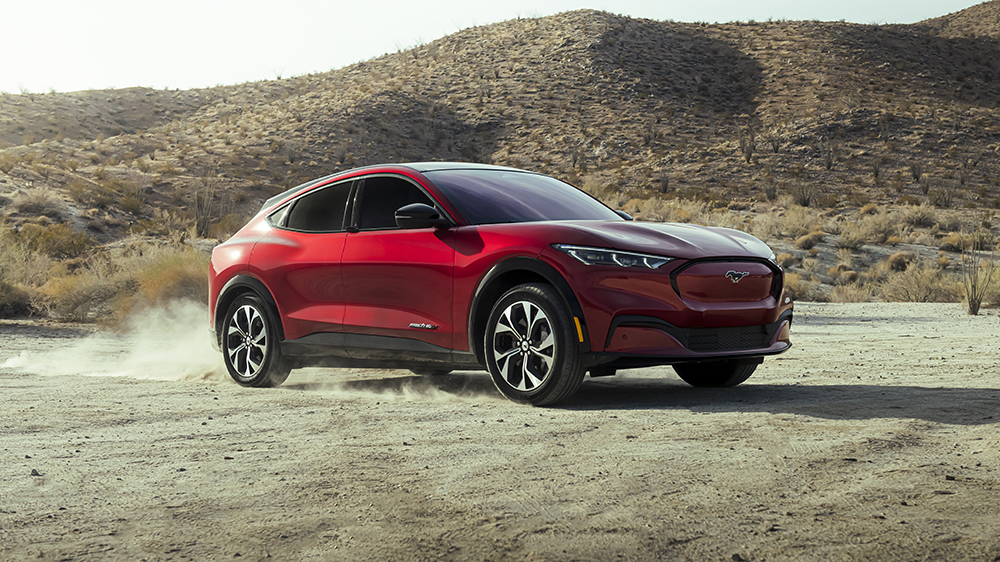 It was only a matter of time until Ford released its first fully electric vehicle. And what better way for the Detroit automaker to join the electric revolution than by slapping its most famous nameplate, Mustang, on an EV? Less expected, though, is the form it has taken. Despite its renowned moniker, the Mustang Mach-E isn’t a battery-powered muscle car. Instead, it’s crossover SUV—complete with four doors and room for the entire family in back—that was merely inspired by the 56-year-old pony.

Needless to say, this has kicked up some controversy among the Mustang faithful. Auto purists are rarely welcoming of change, especially when someone wants to chuck out their beloved internal combustion engines, but the newest Mustang is really like no other before it. Sure, it’s got the familiar emblem at the center of its grille and few of the same curves, but that’s basically it. At least superficially. There is one important quality the Mach-E shares with its gas-powered predecessors that some are missing: This is a true, high-performance vehicle—just one with zero emissions.

Yeah, it may not look as cool as the ’65 Fastback, and its all-electric power train will never roar like a Shelby-tuned mill, but the Mustang Mach-E is a car for those of us who want to actually enjoy our time out on the road without the carbon footprint that usually comes with it. And really, what better way to carry on the innovative Mustang legacy than that?

Few American cars are more associated with performance than the Mustang. In fact, one of the sensations most associated with the iconic sports car is the roar of its gas-powered engine. That’s something the Mach-E won’t be able to deliver, because lurking under its hood is Ford’s first all-electric—and relatively silent—power train.

You won’t be selecting between a V-6 or a V-8, but there will still be choices to make. There are two power trains available for the Mach-E: a rear-wheel-drive (RWD) version that features one motor on the rear axle and an all-wheel-drive (AWD) option that has a motor on both axles. Whichever edition you choose, you’ll also be able to pick between two battery pack offerings: the standard-range 75.7 kwh pack or an extended-range 98.8 kwh pack. The larger battery pack will give the power train a bit more oomph and increase the driving range of your EV (more on that below).

While the Mach-E isn’t powered by a massive V-8 like its predecessors, it still packs some punch. Both the RWD and AWD models generate 266 hp—when connected to the standard-range battery—and between 317 ft lbs and 428 ft lbs of torque, respectively. Spring for the extended-range battery and output increases to 290 hp for the RWD model and 346 hp for the AWD configuration (torque figures remain the same). That’s plenty of zip, but if you want even more grunt, the AWD GT and GT Performance Edition variants, both of which only come with the extended-range battery, run with 480 horses and between 600 and 634 ft lbs of twist.

Robb Report got to take the fresh-off-the-line Mach-E for a spin in January. What we found was a vehicle that fell just shy of premium electric crossovers from Audi and Jaguar but was basically the next best thing. While whipping around the canyon roads above Malibu, writer Laura Burstein found the AWD Mach-E to be “stable and fun” despite the added weight of its extra-large battery pack. The RWD setup proved itself to be surprisingly nimble during an autocross course set up by Ford, and it was even possible to make the vehicle’s tires squeal. No, it’s not an electric muscle car, but, as Burstein wrote, the automaker’s “engineers did a remarkable job making it come close.” Her advice? Wait for the GT Performance Edition and ability to cover zero to 60 mph in 3.5 seconds.

EV performance is about more than just brute strength, of course. That’s why Ford promised to deliver one of the longest-range EVs on the market when it first announced the Mach-E in November 2019. The marque even went as far as to set a range target of 300 miles, something no one but Tesla had accomplished at that point.

Sure enough, the brand was able to make good on this guarantee (after some initial doubt about whether it could). Last fall, the RWD Mach-E became only the fifth vehicle to receive an EPA-certified range of 300 miles or more. Things have gotten even better since thanks to the introduction of the long-range California Route 1 edition. The 2022 RWD version of the the latter has a targeted range of 305 miles, while the AWD with the extended-battery has an estimated range of 306 miles, according to the automaker.

Of course, that 306-mile target is at the top of the spectrum. With the standard battery pack, the RWD has a range of 230 miles and the AWD of 211 miles. Neither of those numbers are anything to write home about, but it’s important to remember that they’re for entry-level models. The Mach-E’s high-performance iterations, the GT and GT Performance Edition, tout ranges of 270 and 260 miles, respectively, which should be plenty for a day out on the road or track.

When you do need to replenish the Mach-E’s energy stores, it should be pretty quick. Every model in the lineup offers fast-charging capabilities, so you’ll be able to go from 10 percent to 80 percent battery capacity in about 40 minutes. And, thanks to the included mobile charger, you can add roughly 30 miles overnight when connected to a standard 120-volt outlet. That’s not a lot, of course, so you might want to spring for a Ford Connected Charging Station for the home. It can add those 30 miles in an hour and fully recharge the EV in 11 hours.

Prior to the Mach-E’s arrival, it might have been hard to imagine the Mustang as an SUV. But Ford’s design team has actually done an impressive job turning a vehicle that has come to define the American muscle car into an electric crossover. It’s not likely to win any auto design contests, but the SUV’s extended hood, sloping roofline and raised rear haunch will appear familiar to anyone who’s spent time looking at the conventional Mustang since the launch of its fourth generation in 1994.

The fact that the Mach-E borrows design language from the “real” Mustang may irk some purists, but it helps the car stand out. That’s no small feat in the early days of the electric era when many EVs tend to look like Tesla knockoffs.

Inside the Mustang Mach-E

Unlike the exterior, which bears a number of Mustang trademarks, the Mach-E’s interior is basically all new. It features a streamlined dashboard with a digital instrument gauge tucked into the driver’s cockpit and a large 15.5-inch touchscreen infotainment system perched atop the center console. The high-tech presentation gives the cabin a distinctly modern look and feel. The biggest difference, though, is the interior space. The traditional Mustang features a 2+2 seating layout, with two seats in the front and two smaller seats in the rear. (Anyone who’s sat in the muscle car can confirm that it’s not exactly roomy back there.) That couldn’t be further from the case with the Mach-E. The second row has three full-sized seats. There’s also plenty of cargo room, with 29.7 cubic-feet behind the back seat (which increases to 59.7 cubic feet if you fold down the back row).

The Mach-E’s 15.5-inch touchscreen provides access to Ford’s robust new SYNC 4 infotainment system. Featuring three dedicated driver profiles, along with one guest slot, the system uses machine learning to adapt to you, so that no adjustments need to be made once in the driver’s seat. This means that when you turn on the EV, ambient lighting will already be set to your liking, the climate controls will be to your preference (for both the front and back row) and your favorite radio station or podcast will be playing from the Bang & Olufsen sound system. You can also use it to select one of three Drive Experiences: Whisper, a calm mode that offers gradual acceleration and braking; Engage, which allows you to quickly change speed and has a louder in-vehicle soundtrack to match; and Unbridled, a performance mode that features increased throttle response to help recreate the feel of shifting between gears on the road.

Pricing: Plenty of Bang for the Buck

Electric technology isn’t cheap, and thus far EVs have generally commanded higher prices than their internal-combustion counterparts.  Despite this, the Mustang Mach-E is quite accessibly priced by both gas and electric vehicle standards. In fact, Ford’s EV sits squarely in the middle of the price range for the traditional Mustang, which starts at $27,205 (the EcoBoost Fastback) but can cost more than $72,900 (Shelby GT500). Pricing for the Mach-E starts at $42,895 for the Select trim, $48,100 for the Premium, $50,775 for the California Route 1 Edition, $59,995 for the GT and $64,900 for the GT Performance Edition. Each Mach-E qualifies for as much as a $7,500 EV tax credit, so you might end up spending even less.

Which Mustang Mach-E Is Best for You?

There’s no American car, with perhaps the exception of the Corvette, more associated with variants than the Mustang. Ford has always made sure to offer drivers a spectrum of performance and power across a range of ‘Stangs, and it doesn’t look like things will be any different with the Mach-E.

Don’t hold your breath waiting for Shelby’s take on the Mach-E, but anyone interested in the crossover has four different trim levels to choose from. Up first is the entry-level Select, which is available as either a RWD or AWD model but, notably, only comes with the standard-sized battery back. The Premium, meanwhile, can be purchased with either the standard or extended battery pack for more range and power. Then there’s the deluxe California Route 1 Edition, which is named after the Golden State’s famous coastal highway and is the longest-range variant at 305 or 306 miles per charge, depending on whether you choose RWD or AWD. Finally, there are the brawny GT and GT Performance Editions, which both sacrifice some range (about 10 to 15 percent) for a lot more output (420 hp) and torque (as much as 630 ft lbs). The last two are the clearest sign that Ford hasn’t forgotten the Mustang’s roots, even if it has dug into a completely different power plant.

More stories about the Mustang Mach-E from Robb Report: