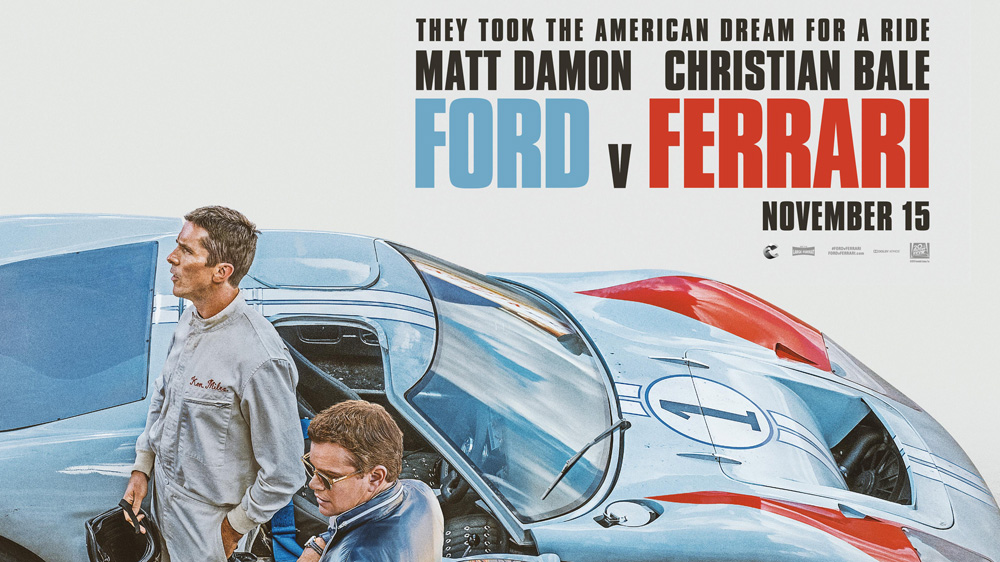 The David and Goliath story of Ford’s twice failed, but ultimately triumphant battle against Ferrari in the 24 Hours of Le Mans endurance race has been the stuff of automotive lore for the better part of a half-century. That saga finally makes its way to the big screen in Ford v Ferrari, a monumental tale that seems larger than life and stranger than fiction, even after all these years.

The era’s inimitable mood—the innocence of America in the 1950s that unfolded into the 1960s’ experimental bravado, seeing the rise of the counterculture movement and the crescendo of the Space Race— is evocatively captured by director James Mangold, whose repertoire includes emotionally laden pieces like Walk the Line (2005) and Cop Land (1997). This time around, Mangold recounts how Carroll Shelby (Matt Damon), guided an improbable convergence of forces: the corralling of irascible racer Ken Miles (Christian Bale), the development of the initially flawed but eventually unstoppable Ford GT40 race car, and the management of the imperious head of Ford Motor Cars, Henry “Deuce” Ford II (Tracy Letts), to what is perhaps the ultimate automotive payoff: the triumphant 1-2-3 finish at the world’s most grueling car race in 1966.

One of the film’s gripping race scenes.  Photo: Courtesy of Fox Entertainment Group.

The story successfully ticks off a number of touchpoints that rarely intersect in storytelling. There is, of course, the overarching angle of America’s “can do” spirit, the plucky determination it took for a US carmaker to take on the prevailing Italian motorsports leaders, and the fact that the motivation to beat Ferrari arose not just from a competitive instinct, but as a form of comeuppance because they walked out of a potential purchase by Ford.

The players are thrilling spectacles: Enzo Ferrari (Remo Girone), defending his Italianate domain with stoic determinism, and Henry Ford II, offended to the point of outrage that his ultimate vision cannot, at least initially, be executed. There’s some insight into the too-big-to-fail, one track-minded mentality of American corporations and how internal logjams thwarted Shelby’s early efforts to deliver victory. (Incidentally, the film depicts Ford’s wins occurring on the second attempt when, in fact, they came on the third).

Ultimately, Ford v Ferrari succeeds at merging the stories of turbulent personalities and incredible machines that, once they finally fell into place and gelled, made history in an epic race upset. It’s a powerful metaphor for the primal will to win, and the forces that trip up those efforts along the way.

The film’s race action is gripping and honestly depicted, as are the perils that made motorsports a highly entertaining—and often lethal—endeavor back in the day. But ultimately, Ford v Ferrari stakes its storytelling claim on how heroes and villains managed to make automotive history against all odds. It’s a riveting tale that finally earns a proper homage on the big screen. Perhaps the film’s most telling strength? How its 2.5-hour runtime passes breezily, effortlessly along, like a finely tuned machine at full tilt.