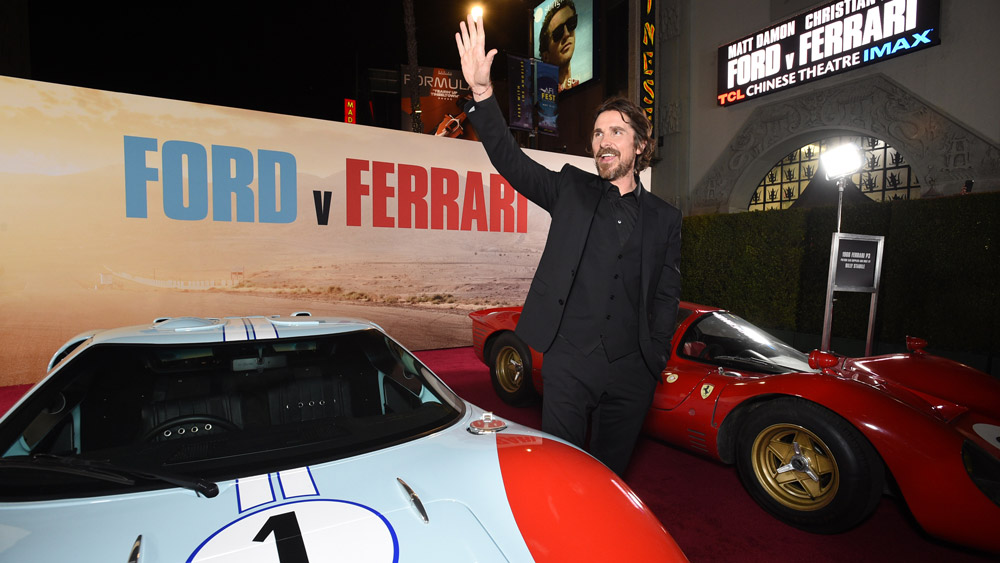 During last weekend’s Rolex 24 at Daytona, the endurance race at Daytona International Speedway that has roots going back to the early 1960s, Robert Nagle took a break from watching the action and reflected on his effort to prepare actor Christian Bale for the competition scenes in Ford v Ferrari.

As stunt coordinator and second-unit director, Nagle had met early on with director James Mangold to express his desire “to make this the best film we could,” he said. “It was a monster to deal with.”

Ford v Ferrari is nominated for an Academy Award for Best Picture, and nearly all who have seen it will agree the movie—which is out now on digital and will be released for 4K, Blu-ray and DVD on Feb. 11—not only deserves the Oscar nod but also presents some of the most visceral and gripping automotive action sequences ever filmed.

Bale portrays Ken Miles, the engineer and racing driver who teamed with Carroll Shelby to lead development of the Ford GT40 and knock Ferrari off the podium at the 24 Hours of Le Mans in 1966. Knowing the demands ahead, Nagle took Bale to the Bondurant High Performance Driving School. Just as Daniel Day-Lewis learned how to cut, drape and sew for his role as fashion designer Reynolds Woodcock in 2017’s Phantom Thread, Bale learned the art of threshold braking and apexing the corners to portray Miles.

On the last day of instruction, Nagle and Bale went on track in Formula Mazda single-seaters. A former racer himself, Nagle wanted to pressure Bale as much as possible, but said the actor “never bobbled.”

Nagle has worked with a raft of big-names, from Jamie Foxx in Collateral (2005) to Jake Gyllenhaal in Prisoners (2013). Bale, he said, is the best actor-driver yet. “His aptitude and focus were phenomenal.”

While Nagle shared these reflections in a conference room at the Speedway’s media center, some 38 cars in four different classifications variously screamed, bellowed, shrieked and buzzed around the 3.5-mile, 12-turn course. The topmost prototype class included cars wearing Cadillac, Mazda, and Acura labels, while lower-spec classes—which are more closely based on production models—represented important sports-car makers from Germany, Italy, and England.

Racing action during the 2020 Rolex 24 at Daytona.  Photo: Courtesy of IMSA.

To keep people occupied during uneventful moments, the Speedway offered live music, a Ferris wheel, and generally “plenty to do and see,” as president Chip Wile expressed it. Agreeing with observations made by long-time fans, Wile noted a bump in attendance. “This weekend, we’ve had some really big crowds. I do attribute it some to the movie.”

Ford v Ferrari has tense scenes depicting the 1965 race here, but they were shot at Auto Club Speedway in Fontana, Calif. Nagle explained that the Le Mans action was filmed at Michelin Raceway Road Atlanta, near Braselton, Ga., and the famously long Mulsanne Straight of Circuit de la Sarthe was replicated on a stretch of country road near Statesboro, Ga.

Additional filming took place in Savannah, where the production used the Grand Prize of America Circuit on Hutchinson Island. Nagle said that, at one point, filming was delayed when an alligator blocked the course, but just before the snake-and-’gator wrangler arrived to convince the reptile to depart, it dashed away of its own volition.

The Chevrolet Corvette C8.R during a pit stop.  Photo: Courtesy of IMSA.

The biggest and most challenging stunt was the tumbling Ferrari that Miles barely misses at Le Mans. If it’s an eyeful on-screen, it was an even more remarkable sight in the moment. “Getting that all timed out was very dangerous,” Nagle said. On one take, the crashing car T-boned the camera vehicle, which careened against a retaining wall. But the rig was built to withstand contact: “We knew that was a possibility.”

It’s natural to draw a comparison between the movie and the race. Elaborate preparation is required at every step, whether planning the action scenes or staging the 24-hour event. “Give it up for Track Services,” race director Beaux Barfield said during the drivers’ meeting three and a half hours before the green flag. “They’re out there to save your ass.”

It was a weekend of being surrounded by the best of the best. The Konica Minolta Cadillac DRi-V.R. prototype driven by Kamui Kobayashi, Ryan Briscoe, Scott Dixon and Renger van der Zande won the race by a margin of 1 minute 35.5 seconds, completing a record 833 laps. Making a respectable debut, the Chevrolet Corvette C8.R finished fourth in the GTLM class behind a BMW M8 GTE and two Porsche 911 RSRs. And best of all, unlike the brutal races of the 1960s, everyone was safe.