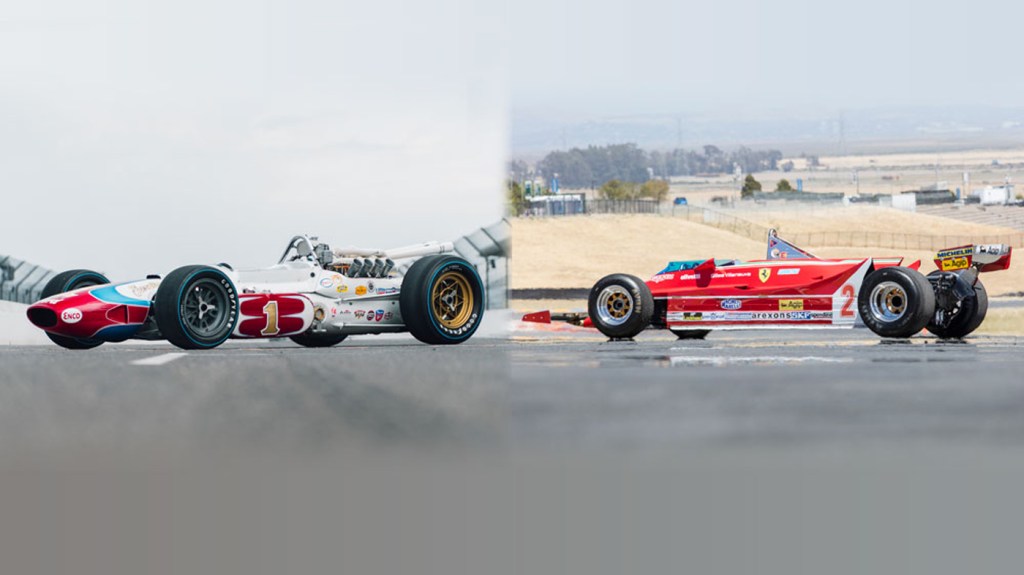 Already the summer’s epicenter for exceptional automotive engineering, Monterey Car Week in Monterey, Calif., will be the backdrop for Bonhams’ Quail Lodge Auction on August 18. Crossing the block will be two lots from motorsports lore: an iconic Indy 500 Lotus and a Formula 1 Ferrari that vie for pole position when it comes to provenance.

A legendary Lotus, the 1964 Type 34 Single-Seater for sale, chassis No. 34/2, has claimed more victories than any other Indy car created by the British marque. And it’s no surprise, since it was piloted by some of the most prominent names in racing history—A.J. Foyt, Dan Gurney, Parnelli Jones, and Jim Clark.

The 1964 Lotus Type 34 Single-Seater that A.J. Foyt drove at a record-setting average speed while qualifying for the 1965 Indianapolis 500.  Photo: Courtesy Bonhams.

In 1962, revered racer Dan Gurney convinced Lotus founder Colin Chapman to attend the Indianapolis 500. While watching, Chapman realized that less could be more when it came to weight and power and that the engine positioning should be brought from the front to the rear. The next year, his collaboration with Ford resulted in the Lotus Type 29, which finished second at the Indy with Jim Clark behind the wheel. And for the same competition in 1964, Clark earned pole position in a Lotus Type 34—an Indy first for any rear-engine roadster.

One of three Lotus Type 34 examples built for the 1964 Indianapolis 500.  Photo: Courtesy Bonhams.

One of three Type 34s built for the aforementioned race, chassis No. 34/2 contains a Ford-developed 495 hp V-8 engine paired with a 2-speed ZF manual transmission. Although only driven in practice, it was done so by none other than Gurney and Clark.

The car would gain greatest acclaim, however, with A.J. Foyt the following season. In 1965, the vehicle carried him to three of his five United States Auto Club–sanctioned races. But most notable is the fact that chassis No. 34/2 was the rocket he blasted through the four qualifying laps at Indianapolis that year, doing so with a record-setting average speed of 161.233 mph.

The car’s competitive career ended in 1966, but Foyt remained its steward until 1992 when it sold to the current owner. In 2017, it was brought back to immaculate condition by Walter Goodwin’s Race Car Restorations and was then temporarily exhibited at the Indianapolis Motor Speedway. Chassis No. 34/2 is expected to fetch up to $2.5 million.

The Ferrari featured at auction is one of the last of a Prancing Horse breed. The 1979 Formula 1 season was a winning one for Scuderia Ferrari, as its stable of Ferrari 312 T4 racers prevailed against the rest of the pack and earned the marque first place in the International Cup for Formula 1 Constructors. In addition, team driver Jody Scheckter took the top spot in the World Driver’s Championship.

Unfortunately, follow-up success eluded the South African driver, and his top finish was fifth place at the United States Grand Prix in Long Beach, Calif. He ended up 19th in the season’s final standings and Ferrari fell to 10th for the constructors. As far as chassis No. 046, it represents one of the last of the marque’s T series to see professional action. The line was replaced by ponies powered by a 1.5-liter turbocharged V-6. An estimated value for the Ferrari is available from the auction house upon request.

The Ferrari and Lotus, both being offered on bill of sale, are among 111 lots that compose the Bonhams assemblage. Other acclaimed automobiles include Juan Manual Fangio’s 1956 Maserati 300 S, a 1958 Ferrari 250 GT Tour de France, and the first McLaren F1 imported to the United States.

The 20th annual Bonhams Quail Lodge Auction, at the Quail Lodge & Golf Club, begins at 10 am. Bidding will be accepted in person, by phone, online, and in absentia.