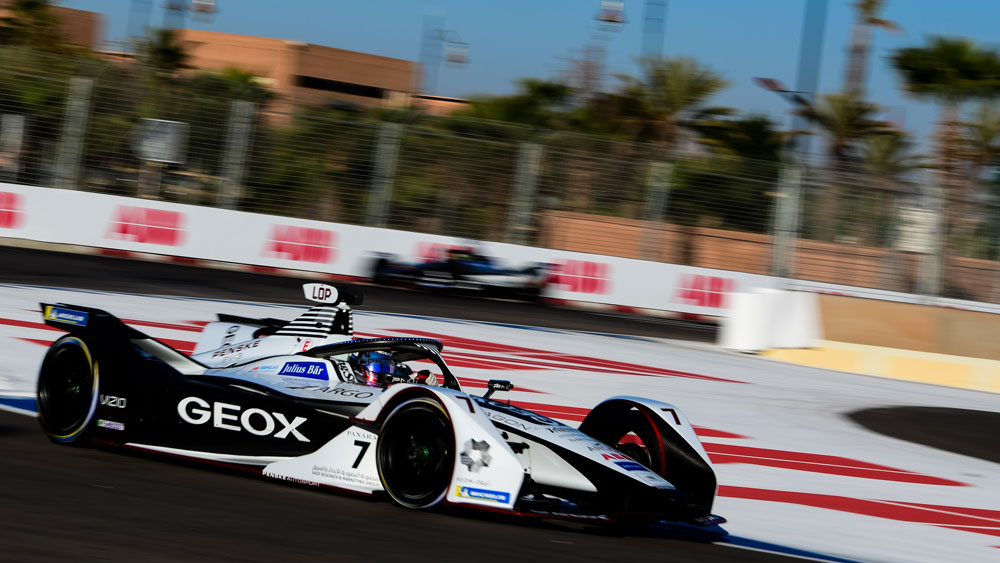 It’s difficult to imagine that a nearly one-ton Formula E race car with the battery-electric equivalent of a mere 268 hp can attract an enthusiastic global following—Formula 1’s best gas-electric hybrids produce over 900 hp. Yet this weekend in the ancient Saudi city of Ad Diriyah just north of Riyadh, defending Formula E champion Audi Sport will face BMWi Andretti Racing, DS Automobiles (Peugeot’s premium brand), Jaguar, Mahindra, and Nissan along with privateers such as Virgin Racing, Geox Dragon Racing, and others.

“This event and experience has already exceeded our expectations, as the circuit and the overall production are fantastic and have already set the stage for a tremendous event on Saturday,” says Jay Penske, Geox Dragon Racing’s owner and the CEO of Penske Media Corporation (Robb Report’s parent company), regarding the first contest of the season. “We are looking forward to a strong finish for Dragon this weekend.”

In another year, Porsche will join the fray. The boys of Weissach kept their three-time Le Mans–winning 919 Hybrid engineering group together specifically for the 2020 Formula E championship. Unlike the spec series rules of the first four seasons, Formula E’s Gen2 engineering rules allow room to explore, and all manufacturers are eager for an electric-car test bed and marketing platform. Car companies find that the value-for-money is much higher here than in Formula 1, too. “We have the complete freedom to design, control, and develop our own power-train parts downstream of the battery, all the way to the wheels,” says Lewis Butler, technical director of Mahindra Racing.

“Teams are free to design and build their own rear suspension, but once homologated at the start of the year, you can’t make further changes,” says Michael Carcamo, global director of Nissan Motorsports. “Dampers are free for all teams to tune, and you can obviously make many adjustments to basic settings, including ride height, camber, caster, etcetera.” To win, you need a tightly organized team that executes perfectly, and engineering depth.

Developed by McLaren Advanced Technologies, the new 250 kW battery is nearly half the weight of the car, but it holds enough energy that cars can complete a 45-minute race, ending the most ludicrous aspect of the first four seasons: There will be no mid-race car swap, in which a driver hopped from his initial car—battery depleted—to a fresh car with full charge.

“Standard race mode is 200 kW,” says Butler. “Attack Mode is activated by the driver running over a single specific region of the track off the racing line. This gives the driver access to 225 kW [equivalent to 301 hp]. Total time per race for Attack Mode will be eight minutes.”

“Attack Mode is new for season five,” says Nissan’s Carcamo. “All drivers must engage Attack Mode at least once during the race, with the specific time period and number of activations announced by the FIA an hour prior to the race.”

Attack Mode has garnered the pejorative nickname “Super Mario Go-Kart Mode,” but it’s the electric racing version of IndyCar’s “push-to-pass” that raises turbo boost for a short period of time. Formula 1’s DRS is another performance enhancer only available under certain conditions. “The activation zone is not announced till late—along with the number of splits in usage of the eight minutes. For example, it could be two periods of four minutes, or four lots of two minutes,” says Butler. The Halo hoop above the cockpit carries LED lights that indicate which mode the driver is using.

“Qualifying groups are done in reverse championship order with full 250 kW,” says Carcamo. “The fastest six drivers then get a single lap to set qualifying time. Our engineers face two challenges: making the car quick over the full race distance, but also having a car that has strong single-lap pace that will allow us to qualify well.” The shoot-out is comparable to an abbreviated version of Formula 1’s Q3 jousting match.

And then there’s Formula E’s equivalent of American Idol viewer voting: FanBoost. According to Butler, “Fans can vote for their favorite driver once a day on the Formula E website and once a day on Twitter using relevant hashtags. The top five drivers get a FanBoost in the second half of the race.” This boost is a brief blast of 250 kW, ideal for completing a heroic overtaking maneuver.

Points are awarded to 10th place. “Bonus points are awarded for pole position and fastest lap. They make a difference. In the first season of Formula E, the first- and second-place finishers for the overall championship series were only separated by one point,” says Butler.

Formula E’s Gen2 car was developed by Dallara, the Italian firm that supplies IndyCar chassis. “Standard aero parts reduce useless spending that has negative impact on the show. Aerodynamic downforce reduces the ability of drivers to race closely. That is why, even for this new generation of car, rules specifically target relatively neutral aerodynamic performance,” says Butler. Certain body panels can be unique to a team, particularly the nose, but teams are not free to spend tens or even hundreds of millions in the wind tunnel testing winglets and gills imperceptible to fans. With no rear wing, a huge diffuser, and limited downforce, cars should run nose to tail and side by side, hopefully resulting in plenty of classic high-speed slingshot overtaking maneuvers and aggressive dicing in corners.

The best way to watch a Formula E race will arrive later in the season. “Ghost racing” will place every gamer in the world right in the middle of the action. “This is a new initiative that is being launched by Formula E this season,” says Carcamo. “We’re awaiting news on the launch date, but fans will be able to race against our drivers virtually with our performance on track mirrored in the game.”