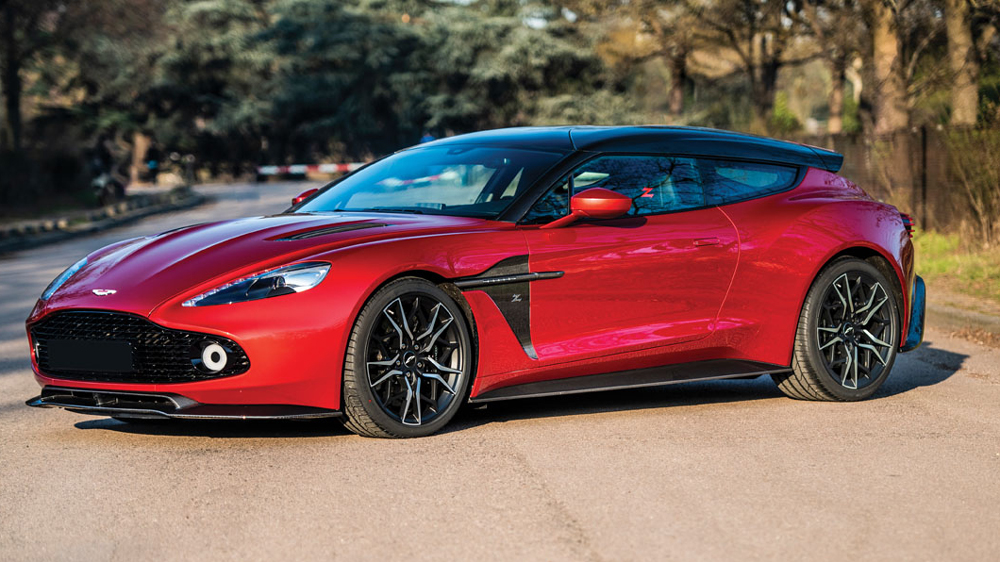 The rakish electric Z logo is not nearly as well known as Zorro’s mark, but car collectors would argue it should have equal billing as the iconic swordsman. Affixed to any vehicle, that Z stands for Zagato, the fabled Milanese coachbuilder that celebrates its centenary this year.

To commemorate the occasion, RM Sotheby’s has assembled four quintessentially Zagato machines for its May 25 sale at Villa Erba, the official auction of the exclusive Concorso d’Eleganza Villa d’Este that takes place annually on the shores of Lake Como.

Two Fiats, a Lancia and an Aston Martin that feature bodies by the sculptors at Zagato will take to the lawn at Villa Erba. In total, they account for nearly $4 million worth of automotive artwork that would stop traffic at almost any car gathering on the planet.

“What makes Zagato-bodied cars is that they just don’t look like anything else out there,” says RM Sotheby’s Ian Kelleher. “A designer like Pininfarina has a more classical approach to design and, in the end, often is more influenced by the manufacturer they’re working for. Zagatos always seem like they’re truly built as something separate from the manufacturer. That doesn’t always work out perfectly, but when it does, it is truly a unique creation.”

Leading the pack is a 1955 Fiat 8V Zagato Coupe ($1.8 million to $2 million estimate), a car that looks at once delightfully retro but also strikingly modern with its rounded forms and abundance of glass. The hood scoop recalls a modern Ferrari California, while the gaping, rounded grille recalls that of a current day Maserati.

This 1955 Fiat 8V Zagato Coupe is estimated to fetch as much as $2 million.  Photo by Paolo Carlini, courtesy of RM Sotheby's.

In its day, the Fiat 8V was being compared to sports-oriented cars such as Porsche’s 550 Spyder and the Mercedes-Benz 300 SL Gullwing. To pull its weight, the 8V featured “a chassis and powerplant that was among the finest in its day,” says Kelleher of the V8-engined sports car. The car for sale is one of just 26 Zagato Coupes built, and a veteran of myriad vintage races including the Mille Miglia—no doubt a lure for historic racing enthusiasts.

The Double Bubble, named for the bumps on the car’s roof, is based on the humble Fiat 600 but benefits from a lightweight chassis and free-revving engine that make the car a natural for vintage gatherings. Both this car and the Lancia have been fully restored and provide those without vintage-Ferrari money the chance to revel in Italian style from a half-century ago at a fraction of the price.

The Aston Martin Zagato on offer is a beast of another nature. It draws on the coachbuilder’s long history of creating unique cars for the British manufacturer, most notably the early-1960s DB4 GT, which takes James Bond’s favorite sports car, or close to it, and gives it a dose of bespoke Milanese panache.

The Shooting Brake for sale immediately recalls Ferrari’s four-seat tourer, the FF (now called the GTC4 Lusso), but is decidedly rarer. Number 12 of 99 built, the Shooting Brake example on offer is derived from Zagato’s Vanquish body styles, features a body of carbon fiber, a 6-liter V-12 and a notably stiffer suspension for a more sporting ride. Delivered new to its owner in France, this Zagato is finished in Lava Red over Obsidian Black.

“It’s like the FF, but with far more edginess,” says Kelleher, who adds that response has been lively to the car so far. He attributes that to modern drivers who want the exclusivity of such a vehicle while preserving the immense practicality of a four-passenger-plus-trunk configuration.

“Sure, you can buy very exclusive SUVs these days,” he says, “but you’re not going to see many of these on the road. If you want to stand out in a good way, this Zagato is it.”