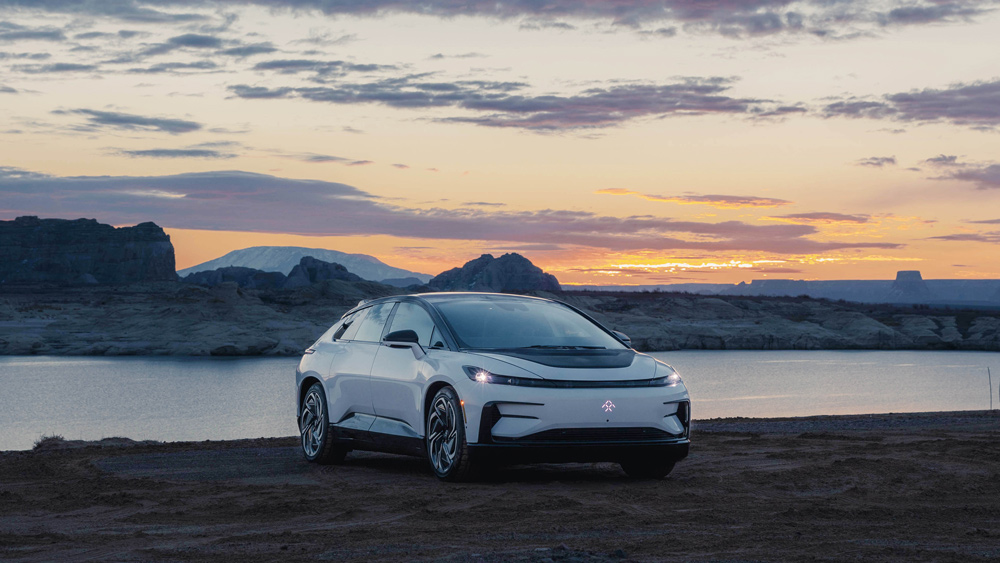 As the late entertainer Eddie Cantor once said, “It takes years to make an overnight success.” Nowhere is this more evident than the world of startups. For Faraday Future, a combination tech- and automotive manufacturer poised to finally make its impact on mobility, the road has been particularly challenging—and the reception has not been all applause.

Established in 2014 with a moniker referencing Faraday’s law of induction, now a tenant of electric power trains, the marque has experienced its fair share of jolts, which drained it financially. Roughly 18 months ago, however, industry veteran Dr. Carsten Breitfeld became Faraday’s CEO, and has since seemed to have flipped the switch on a $1 billion merger, set to close next month, which will involve the company going public.

According to Breitfeld, this will be more than enough to get Faraday Future’s all-electric, 1,050 hp luxury car into production at its 1.1 million square-foot plant in Hanford, Calif., by later next year. Breitfeld recently spoke to Robb Report about his initial period with the company, the latest infusion of capital and why he feels Faraday Future’s success, while not overnight, is certainly imminent.

What has been your journey to Faraday Future?

I have basically two lives in my past. I stayed 20 years with BMW, and really did almost everything, from a high-level perspective, that you can do in a car company. I ran the BMW i8 program, an amazing program of course, but it was more about understanding the future of mobility. Then, inspired by what I learned, I co-founded my own electric car company out of China, called Byton. It went quite well for three years, then trade frictions between the US and China came up and it became about politics. Once politics between the two biggest nations of the world gets into such a startup, things are lost, so I left.

What did you learn from the Byton experience?

Number one is that you need your own technology if you really want to create something sustainable. And if you want to lead the industry, then you need your own premium technology. The Byton approach was a little bit different. We tried to configure a great product, with a nice design, out of existing technology which we could buy all over the world.

Number two is that you really have to take care about who you bring in as an investor. It’s not only about money, it’s about strategy, having the right portfolio, having partners who support you in governance. Both of these elements I found in Faraday. There was a lot of technology developed back then, with $2 billion already invested into the company, and a motivated team of people. This is why I ended up at Faraday.

At the time you joined Faraday, perception of the company wasn’t very favorable.

The biggest issue I found was that, although there was all the technology, excitement and product, there was a lack of execution capability. If you have a great vision of where you want to be in 10 to 15 years, you cannot achieve the vision in a single step, you have to break it down to very small steps at the beginning, a single product you bring to your customer to start to build the brand and establish it in the market. If you are not able to achieve this step, the vision will never happen. The company had over-promised, many times, and under-delivered— something you should never do.

A rendering of what Faraday Future’s 1.1 million square-foot plant in Hanford, Calif., will look like when completed.  Photo: Courtesy of Faraday Future.

How did you initiate change?

I’m a German engineer and have always followed a different route, which would be under-promise and over-deliver. So we stopped talking about all the big plans in the future and concentrated on the substance. There was a great product in gamma prototype, which is close to a production car, and no one knew about it. In January of 2020, I took one of these cars and drove it from Los Angeles to Las Vegas for CES [Consumer Electronics Show]. We drove it with a single charge out of Los Angeles all the way to Vegas, 270 miles or so, and arrived with 110 miles of range left. This created more credibility. We then brought on independent board members [to Faraday] and restructured, which made the company investable.

Three electric motors allow the FF 91 to launch from zero to 60 mph in 2.39 seconds while the battery system offers more than 300 miles of range.  Photo: Courtesy of Faraday Future.

There have been some new developments on the investment front, right?

We have been unfortunate and lucky at the same time. Unfortunate, because we had been in discussions with some private equity companies to do normal private funding, and then go IPO later. But then COVID hit and they all backed out because no one knew what was going to happen, so we lost a bit of traction. At the same time this whole SPAC [special purpose acquisition companies] thing became hot, and because we had substance, we became an interesting target.

We ended up with RMG [Riverside Management Group] and PSAC [Property Solutions Acquisitions Corp.] because I didn’t want a business relationship with someone who’s just interested in short-term money. I wanted long-term investors who are really passionate about what we are doing here and who want to become partners. This next year, we have to deliver, and we need stability. We found these guys and went for a PIPE [private investment in public equity] and will end up with more than $1 billion cash. This will bring the FF 91 to market and provide a buffer.

If the merger goes through next month as planned, the FF 91 should begin production within a year.  Photo: Courtesy of Faraday Future.

We want to redefine the top luxury segment of automotive, above Bentley, Rolls-Royce and all the others. We have almost 900 patents filed and 550 granted worldwide. We have very compelling technology regarding propulsion and internet in the car—it’s a smart device on wheels, and every seat offers an exciting experience. The driver gets 1,050 hp, so you get from zero to 60 mph in 2.39 seconds, and it handles very well. It will have a voice-control navigation system and, upon arrival to your destination, will park itself.

Passengers in the rear have 48.9 inches of legroom, zero-gravity seats inspired by NASA, a 27-inch display and a patented connectivity module that allows for three different network providers at the same time so you always have a very secure, stable and high-quality internet connection.

According to Breitfeld, the FF 91 is a smart device on wheels.  Photo: Courtesy of Faraday Future.

How is Faraday Future working to improve battery technology?

There is certainly room for improvement in the cell-chemistry technology we have right now. I think that solid state will happen, but I think it’s farther away than many people think. The question is how will more advanced battery technology be used? Are we going to use it to drive range further? I don’t believe this. I don’t believe that a range of 600 or 700 miles makes sense for the simple reason that you carry a lot of weight and money around for something you just don’t need.

I think that improving battery technology will involve reducing weight—range will stay where it is now, or even decrease slightly. There are probably only two percent who have long commutes every day or don’t have access to chargers. And that’s a competitive advantage we have in our company. Our battery technology is a very modular concept that consists of so-called “strings.” Every string is a 22 KWh battery of its own, and they are all connected in parallel at the same voltage. That means you can add and remove strings to increase the energy by configuring bigger or smaller batteries in the same housing—built-in flexibility.

How has the pandemic impacted Faraday Future’s timeline for development?

I will say that we continued to make progress. Even through the global pandemic, our momentum was well underway in terms of product development and fundraising. We fundamentally learned new ways to work remotely, and we developed our recent merger with PSAC, all under the auspice of the pandemic. As such, the primary factor for the company in choosing to pursue a merger with PSAC was speed to market. We are accelerating at just the right time.