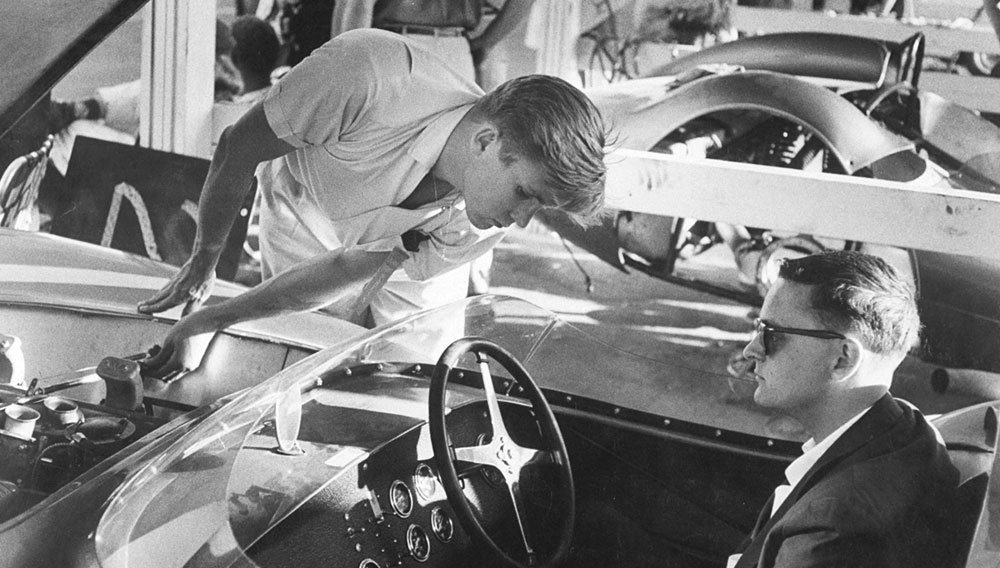 Speed can be habit forming, and motorists who overindulge in the ecstasies of acceleration are apt to meet the same peculiar fate: a career as a professional racecar driver. One such velocity addict was Lance Reventlow, who, like other members of his family, lived and drove in the fast lane.

Reventlow’s fascination with motoring was sparked by one of his numerous stepfathers, Prince Igor Troubetzkoy, a Russian nobleman and racecar driver who, in 1948, when Reventlow was 12, won the Targa Florio in a Ferrari Allemano 166S Spyder. Troubetzkoy’s stint as stepparent was brief, lasting only a few years, but he imparted a passion for sports cars that remained with Reventlow into the boy’s teenage years, when he began to indulge a taste for high-performance engines. In 1957, after spending a summer racing a rented Cooper Formula 2 in Great Britain, Reventlow settled in Southern California, resolved to design and construct an American competition car to rival those he had encountered in Europe.

Funding for this venture, Reventlow Automobiles Inc., came from the coffers of the young motorist’s mother, Barbara Hutton, whose reckless steering on the road of life drove a permanent wedge between herself and her son. The granddaughter of dime-store magnate Frank Winfield Woolworth, Hutton divorced her first husband, an ersatz Georgian prince, to marry a Danish count, Court von Haugwitz-Hardenberg-Reventlow, by whom she had her only child. The press assumed that the count was drawn less to the socialite’s soigné person than to her personal fortune, reputed to be between $40 million and $50 million—a view supported by the brevity of the union. Hutton’s history of dysfunctional relationships began in 1917 with the suicide of her mother, Edna Woolworth Hutton, whose body the 5-year-old Barbara discovered in her apartment in New York’s Plaza Hotel. In the wake of this tragedy, Hutton’s father confined his paternal attentions to the management of his daughter’s trust fund, relegating the child herself to the care of governesses and relations. Hutton’s nomadic existence persisted into adulthood, as she moved from New York to London, Paris, Tangiers, and Mexico, exchanging one husband for another along the way. Her divorce from Reventlow’s father in 1941 was particularly costly: The count—who apparently beat his wife and was arrested and held on £2,000 bail for threatening her with bodily harm—asked Hutton for $5 million and custody of their son. He received a sum closer to $1.5 million, according to some reports, and Reventlow—legally, at least—remained with his mother.

Hutton and Reventlow’s financial ties remained intact, but their personal relationship came to an end when, not long after Reventlow launched his company, they argued bitterly and parted ways. More determined than ever to make his mark, the young driver focused his attention on his new Formula 1 car, on which he spared no expense. He hired chassis specialists Richard Troutman and Tom Barnes, as well as engineers Chuck Daigh and Ken Miles, to develop the vehicle, which, perhaps optimistically, he named the Scarab—after the beetle that in ancient Egyptian mythology symbolized resurrection and renewal. The first examples seemed to warrant this moniker: One, driven by Daigh, beat Phil Hill in his Ferrari at the 1958 Riverside International Grand Prix, and Carroll Shelby achieved a record-breaking victory in the Continental Divide Raceways that same year. But victory on the fabled tracks of Europe—the dream on which Reventlow had lavished so much Woolworth money—eluded the Scarab. Despite its sleek appearance and Leo Goossen’s design, the front-engine racecar was already obsolete when it arrived at the 1960 Monaco Grand Prix, where faster, more agile rear-engine models—such as the Lotus that sped Stirling Moss to first place—set the new standard.

His team went on to build a rear-engine version of the Scarab, but Reventlow lost interest in the project and, in 1962, closed up shop. His professional racing career lasted little longer than most of his mother’s marriages. Nor did the Woolworth fortune long survive its presumptive heir: Seven years after her son died in a plane crash in Colorado at the age of 36, 66-year-old Barbara Hutton suffered a fatal heart attack in Beverly Hills, Calif., with only a few thousand dollars left to her name.