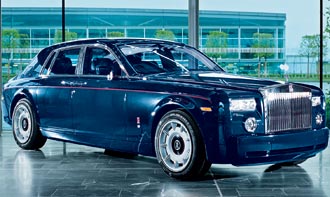 In 1979, Rolls-Royce Motor Cars (www.rolls-roycemotorcars.com) celebrated its 75th anniversary by producing 100 examples of the Silver Shadow II, a special edition identifiable by badges with red-on-chrome lettering. The subtle flourish referenced cars built prior to 1931, before the carmaker began using black lettering.

To mark its 100th anniversary this year, Rolls-Royce Motor Cars will again use the red-lettered badges on a limited run of Centenary Phantoms. Each of the 35 cars—15 will come to the United States—bears a mascot of solid sterling silver and features a deep shade of blue-gray metallic paint called Dark Curzon. Interior touches include leather dyed the same Dark Curzon hue and set off by a Smoke Gray leather headliner, a textured aluminum dash panel encasing instruments with a unique anodized finish, and mahogany veneers inlaid with silver. Should the extra touches go unnoticed, special tread plates in the sills identify these as Centenary cars each time the doors are opened.