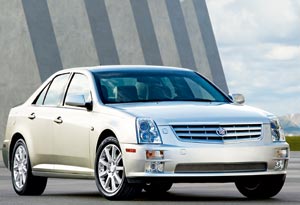 As a follow-up to the fast-moving SRX and the surprisingly swift CTS-V, and as part of its return to relevancy, Cadillac (www.cadillac.com) is releasing the next version of the STS. The 2005 STS, which shares the same Sigma platform as the SRX and CTS-V, is a rear-wheel-drive executive sedan that boasts the power and luxury of its overseas counterparts but has a price point lower than the European and Asian offerings.

The V-6 version of the 5-speed STS will be available this fall for $41,000, while the 320 hp, 4.6-liter V-8 charger will sell for $47,500. “This is a tremendous premium value over comparable Mercedes-Benz and BMW products,” says Mark LaNeve, Cadillac’s general manager. “It’s further proof that we can compete.”

While the lines of the STS are not as sharp as those of the CTS or XLR Roadster, the edgy sedan is evidence that Cadillac is no longer just the preferred marque of grandfathers.

With 200K Dead, Trump Spews Lies Then Golfs for the 298th Time During His Presidency