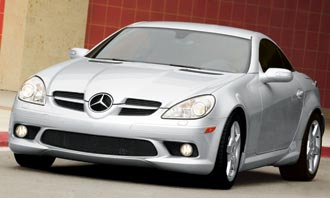 The second-generation Mercedes-Benz SLK (www.mbusa.com) will arrive in September displaying style references to the Formula One–inspired SLR McLaren: pointed nose, sloped windshield, long hood. But such cosmetic changes are not the only improvements made to the SLK350, which is expected to debut in the mid-$40,000 range—a mere fraction of the price of a McLaren.

The two-seater’s new 3.5-liter V-6 engine produces 268 hp, up 52 horses from the 2004 SLK320. Transmission choices include a 7-speed automatic and an all-new 6-speed manual, complemented by a three-link front suspension and superb rack-and-pinion steering.

The retractable hard top requires only 22 seconds to be lowered or raised, but a new feature might convince SLK drivers to leave the top down: Heat vents are located in the headrests to stave off the chills of off-season convertible motoring.