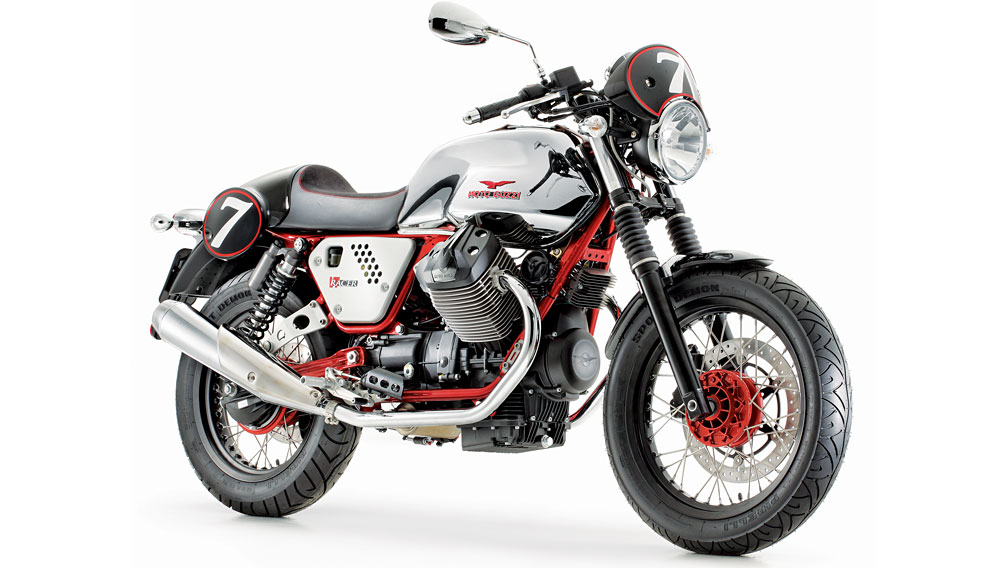 For the new model year, Moto Guzzi has tinkered with its V7 lineup of retro-style road bikes, revamping or revising each of the three models. The 2013 Moto Guzzi V7 Racer (www.motoguzzi.com) is an improved version of the bike that arrived in the United States in 2011 as a special sport edition of the V7 Classic. Moto Guzzi debuted the V7 Classic in 2008 as the initial homage to the brand’s V7 bikes from the late 1960s and 1970s. Compared to the previous model’s engine, the new V7 Racer’s 90-degree V-twin produces more torque (44 ft lbs versus 37 ft lbs), delivers better throttle response, and generates more horsepower (50 hp versus 48 hp). The new V7 Racer, which is priced at about $10,000, also has sporty aluminum wheels, lighter engine components, a new single-intake fuel system, and a larger, chrome-plated fuel tank. The new versions of the Classic and Café models in the V7 lineup are the $8,400 V7 Stone, which features a matte-black or white paint job, and the $9,000 V7 Special, a two-toned tourer available in red and white or black and mustard yellow. Both bikes are equipped with the same engine that powers the Racer.