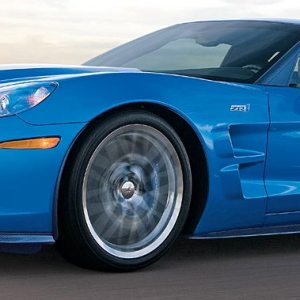 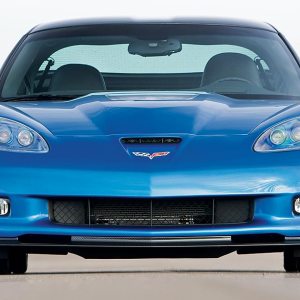 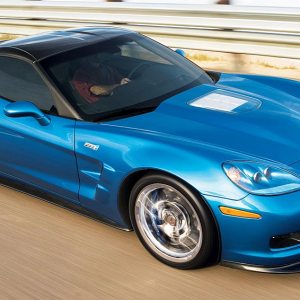 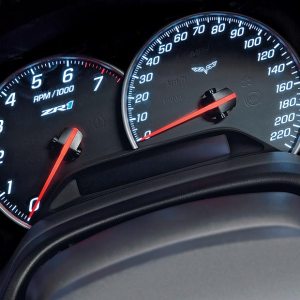 The Chevrolet Corvette would not play in Paris. To paraphrase the old Chevy commercial jingle, the car is—like baseball, hot dogs, and apple pie—distinctly American. And it is overtly American. Since its introduction more than a half-century ago as the nation’s first sports car, the Corvette has evolved into a Yankee totem. It typifies what makes us tick as much as Zippo lighters, hash browns, Levi Strauss, Semper Fi tattoos, and John Wayne. (Wayne, it should be noted, drove a 1953 Corvette, but the former USC Trojan tackle gave the car to a friend because it was too small for his 6-foot-4 frame.)

Blatantly macho when it was introduced as a Harley Earl design coup at the 1953 GM Motorama in New York, the Corvette was diametrically different from that era’s dinky British sports cars, heavy and haughty German roadsters, and sleek Italian two-seaters. It also was hard on the ears and rough on the bottom if your travels took you farther than the next town.

Born to be wild and blue-collar rough around the edges, the Corvette appealed to anyone who had ever crushed a beer can in his fist. It earned the adoration of good ol’ boys in heat for a high-performance, straight-line muscle car that was inexpensive to buy and affordable to maintain. Those early Corvettes were drafty, and their fiberglass fenders flapped, but owning one was considered a patriotic act—or maybe a jingoistic one, like raising a middle finger to the Europeans. And if the car did break, there was always Pep Boys.

But this is a new millennium, when Budweiser belongs to a Belgian brewer and Americans are besotted with the smoothness, comfort, elegance, balance, and civility of European sports cars, coupes, and even some sedans that are just as fast as any U.S.-based cousin. Chevrolet has delivered its imperative response: the 2009 Corvette ZR1. It has the easy power, the high technology, the handsome elegance, the controlled passion, and, maybe, most of the élan of Aston Martins, Maseratis, Jaguars, high-end BMWs, and midrange Mercedes-Benzes.

It also has a top speed of 205 mph, thanks largely to its new LS9 supercharged 6.2-liter V-8. The small-block package delivers a ferocious 638 hp and 604 ft lbs of torque with a power band wider than Manhattan.

Forgive me for name-dropping, but my recent schedule has been heavy with hot-lapping in impressive company. I drove a Cadillac CTS at the Nürburgring, a Mercedes-Benz SLR McLaren 722 GT at the Paul Ricard circuit just outside Marseille, France, and an Aston Martin V8 Vantage at Le Mans. Yet my drive of the ZR1 in August, on the 3-mile road course at the GM Proving Grounds at Milford, Mich. (just northwest of Detroit), proved that this Corvette is a supercar worthy of garage space alongside the competition from Stuttgart, Gaydon, Modena, Ingolstadt, Crewe, and Munich. Even Maranello might be wise to consider the ZR1 as more of a threat than a yuk. After all, the Corvette’s zero-to-60-mph time is 3.4 seconds, which is faster than Ferrari’s F430 Spider and Dodge’s vulgar Viper. The ZR1 reaches 100 mph in seven seconds, which is quicker than that half-million-dollar baby, the Mercedes-Benz SLR. And the ZR1 covers a quarter-mile in 11.3 seconds, passing through the traps at 131 mph—time and speed figures that match the Porsche Carrera GT’s.

However, the Proving Grounds did little to encourage the ZR1’s obviously high spirits. The circuit was built for development work, not for racing. Each corner is different, which destroys any vehicle-driver rhythm. The course has no straights for flat-out and furious driving, and one sharp left-hand turn is known as the Toilet Bowl. It is tight and hugely banked, and if you miss the blind crest at its exit, you might indeed be searching for a toilet.

Although I was limited to driving in either third gear or second—except for one short, uphill fourth-gear blast—the ZR1 behaved beautifully. When the car ripped around in Sport (Standard Magnetic Selective Ride Control) mode, power response was instantaneous, and steering was effortless and pinpoint. The huge Brembo carbon-ceramic anchors allowed me to go deep and late into the turns.

The ZR1 was equally enjoyable on the freeways and farm roads of Oakland County, a picturesque area northwest of Detroit. No gears hung up, no brakes snatched, and there were no lurches or rattles.

The ZR1’s essential quality, says Ed Peper, general manager at Chevrolet, is the ratio between its power, 638 hp, and its weight, 3,324 pounds of aluminum and carbon fiber. “The power-to-weight ratio of the ZR1 [5.2 pounds per horsepower] is exceptional,” Peper says. “It’s better than the Porsche GT2, the Ferrari 599, even the Lamborghini LP640.”

The car’s testosterone count is high, and so is its price—for a Corvette. With a base of $103,970, which rises to $117,000 when you add the desirable options (all-leather interior, Bose audio system, navigation system, upgraded seats, and Bluetooth), the ZR1 is the most expensive Chevy ever. It appears as though the perennial a-lot-for-a-little plus of Corvette ownership has been lost.

Not so, contends Harlan Charles, product manager for Corvette. Chevrolet will continue to offer the stock Corvette at $48,500 and the more powerful, better-trimmed Z06 at just under $74,000. “A Corvette will still be known as the best-bang-for-the-buck car,” says Charles, whose shirt has the slogan “Life Begins at 200” embroidered on the back. “The ZR1 is the money-is-no-object Corvette. So we haven’t lost the price edge and are still way below Ferrari, Porsche, Maserati, and Aston Martin.”

Charles foresees “in-addition-to” buys by car enthusiasts who want a ZR1 in addition to their Porsche 911 Turbos. And he believes that, despite its smooth ride and sophisticated systems, the ZR1 has lost none of the Corvette’s original spark and appeal. “It can still poke fun at the country-club set, but the ZR1 doesn’t have to back down from any other car,” he insists. “There will always be that badge thing, but here is a car that is affordable, reliable—one that you can drive every day and trust every day. When we started, we had one goal for the ZR1: Even if you can afford anything, this is the intelligent purchase.”

Charles has been with the ZR1 since its beginning, six years ago, when it was a thought spoken aloud by General Motors CEO Rick Wagoner. Wagoner and the GM design team were gathered around a clay model of the then-new Corvette Z06. Wagoner, says Charles, praised the team’s ability to create such an impressive car and asked, “What could you do for $100,000?”

The ZR1 then was conceived and approved, and now it represents the most significant milestone for the Corvette since 1955, when Zora Arkus-Duntov reengineered the underpowered, 6-cylinder, mishandling, automatic original by equipping it with a V-8 and a 3-speed manual that transformed a joke into a legend. ZR1 production began in August at a rate of seven cars a day. Annual production will be about 2,000 cars a year.

Charles acknowledges that the Corvette went European with the ZR1, as the design team sought to create a much lighter car with a much lighter clutch and lighter steering and brakes. “We have reduced the effort of driving the car,” he adds. “We still have all that American torque and horsepower, but in a car that is more refined, smoother, quieter, and very well balanced.”

The chassis is an aluminum space frame. Where once there was only fiberglass, now there are many square yards of black carbon fiber. They form the hood, fenders, rear spoiler, side skirts, top, front splitter, and rear diffuser, and they identify the car as a ZR1.

The Brembo brakes are carbon-ceramic manhole covers: 15.5-inch rotors up front and 15-inchers at the rear, each clamped by sky-blue calipers. Brembo originally designed the brakes for the Ferrari Enzo.

The 6-speed manual transmission is mated to a dual-disc clutch that allows the kind of deft, silky shifting previously enjoyed only by Honda owners. The front wheels are 19 inches, the back are 20, and all are shod with ultrabroad Michelin Pilots.

The ZR1’s chromed, 20-spoke wheels yelp of stylish performance, and those black carbon-fiber bits stand out like beauty marks. Both front flanks display twin yawning air extractors for brake cooling, and ahead of each rear wheel is a single inlet. The car’s raised back, lowered front, and flaring fenders create a handsome—dare we say gentlemanly—posture that suggests an amalgam of Anglo, Franco, Tuscan, and Teutonic styling. Further evidence of a Tuscan influence is the clear polycarbonate window in the ZR1’s hood, which reveals the supercharger atop the LS9 engine. The design feature is an obvious—and acknowledged—lift from Ferrari’s way of showing off its cars’ mechanicals.

The LS9 seems to contrast with all of the ZR1’s high-tech elements. Although the engine is new, it has a Smithsonian-ready design featuring antediluvian pushrods and just two valves per cylinder. “But [the engine design] has a lot of advantages, most especially its size,” says Charles. “It is a high-displacement engine that is light, compact, and fuel-efficient. And it still works.”

With an estimated city/highway average of 17 mpg, the ZR1 is a pale green at best. But the LS9’s power, as evidenced by the car’s speed and quickness, is not debatable.

“I don’t know who said it,” says Charles, “but someone was once asked about that engine, and the reply was, ‘If you want more valves and cams, we’ll throw some in the trunk for you.’ ”