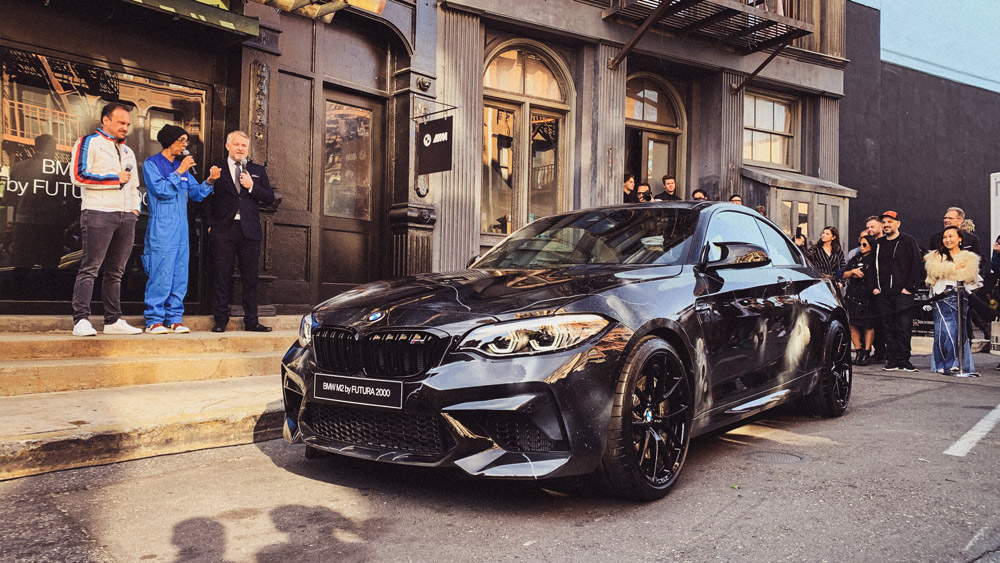 With 405 hp and a 3,600-pound curb weight, the BMW M2 adds up to a four-letter word: fast. But in spite of that speed superfluity, the M2 goes about its road and track duties with little drama. That’s not necessarily a bad trait, but for folks looking for more edge, the model may leave them wanting.

BMW’s latest M2, however, addresses that issue by bringing a little more visual excitement to the party. The result is the BMW M2 Edition designed by Futura 2000, a pioneering visionary in the street art movement, and practically the fifth member of the English punk rock band the Clash. This special M2 may appear as the latest in a storied line of BMW Art Cars, but this is not an official Art Car.

From left: Artist Futura 2000, rapper Travis Scott and the CEO of BMW M, Markus Flasch, at the unveiling of the BMW M2 Edition designed by Futura 2000.  Photo: Courtesy of BMW.

“Art cars in the past have always been based on race cars, and they have always been one-offs,” says Markus Flasch, CEO of BMW M. Flasch explains that the M2 Edition designed by Futura 2000 is meant to make the art car more approachable and accessible to the consumer.

The interior also features accents from the artist.  Photo by Manuel Carrillo III.

The first of the three hand-painted examples debuted in front of a large crowd on the Paramount Pictures backlot during the Frieze Los Angeles art fair on Thursday. Futura 2000, a long-time BMW enthusiast, beamed with excitement as the public got its first look at his newest creation.

“I know my place in [BMW’s] history of what they’ve done with artists,” says Futura. “It’s just a feeling of super pride.”

The first of the three hand-painted M2s debuted on the Paramount Pictures backlot during the Frieze Los Angeles art fair.  Photo by Manuel Carrillo III.

Order books are now open for the BMW M2 Edition by Futura 2000. Although the debut car and its two counterparts will be hand-painted all over, the 500 “Edition” versions will only have their rocker panels painted, as well as the front and rear bumpers.

Whether you end up getting the keys to one of the auctioned, fully hand-painted cars, or one of the 500 “Edition” cars, your status as art connoisseur will definitely accelerate.