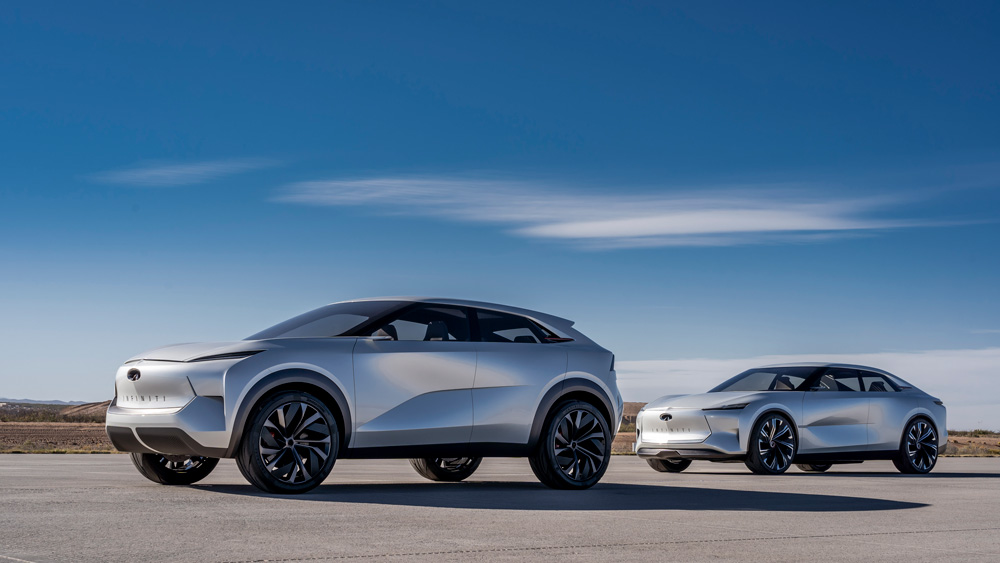 Standing in the clear desert skies of New Mexico, next to a building that houses spaceships, the Infiniti executives are gathered around a car hidden by a sheet. It’s a pretty grand spot for a reveal—Spaceport America, where Richard Branson’s Virgin Galactic will soon begin hosting flights to sub-orbital space for paying customers.

Infiniti is hoping to entice a paying customer of its own, and the covering is pulled back to reveal what looks to be the FX35, the brand’s iconic, slick-backed crossover, first introduced in the early 2000s and well ahead of its time.

But this isn’t back to the future, and this isn’t the FX35. Rather it’s a soon-to-be-released version of the Infiniti QX50 crossover, this time called the QX55. From where I’m standing in the rear, the sloping roofline and flared haunches clearly call back to the FX35, an SUV I truly loved. The front and side perspective, however, show it to be a modern Infiniti.

A teaser for the QX55.  Photo: Courtesy of Infiniti.

To my mind, it’s a step back—and therefore, a step in the right direction. Most of my favorite Infinitis are models no longer made: the aforementioned FX35 and the G35 sports car. Those cars felt fresh and unexpected, ahead of the motoring pack in many ways.

Infiniti was born from its corporate parent Nissan 30 years ago, and the company is using the three-decade anniversary as an opportunity to reflect on its past and future. While a 30th doesn’t have the sparkle of a 50th or 100th anniversary, it does make a good inflection point. Hence the company rented out the Spaceport and its two-mile-long runway as a venue for a gaggle of journalists to drive all of the current models and get a sneak-peek of future product.

The marque celebrates its three-decade milestone.  Photo: Courtesy of Infiniti.

The QX55 will fill a needed slot in the lineup — a design-forward crossover for drivers who like to drive something a little different. Though the company once had the lead in this segment, it now follows a cadre of stylish crossovers like the BMW X6 and Mercedes-Benz GLC Coupe.

Which takes us to the future. The company says it will release five new models in the next three years, a highly ambitious rollout that includes the Q55 in 2020. To that, they show us concept cars inside a tent. One is a fully-electric SUV called the QX Inspiration, the second a concept Inspiration sedan.

Infiniti promises to release a production version of the QX Inspiration SUV, which will make it the brand’s first-ever fully electric power train. Take note of this one, for it will be important. The concept is suitably sci-fi, with no openings in the grille and suicide-opening rear doors. The production version should carry some of its adventurous spirit, and will take on the likes of Tesla’s Model X and the Audi e-tron.

Also on the lineup are two sedans that will feature a gas/electric hybrid power train, a somewhat inelegant setup in which the gas engine acts as a generator for a battery system. We’ve seen similar in the Chevy Volt and Fisker Karma, the former discontinued, the latter long since dead.

One of the future sedans will become Infiniti’s flagship sedan—based on the Q Inspiration in the tent. The second will be smaller and less expensive. All of which takes us to today. This isn’t the first time I’ve driven all of the company’s current lineup. Last year, I even battled through dunes and harrowing desert storms in the QX60, QX50, and QX90 in Mongolia’s Gobi desert on a search for dinosaur bones. So, running those vehicles on paved and dirt roads here in New Mexico is a bit exciting, but not quite up to the adventures we experienced halfway across the world.

The company says it will release five new models in the next three years.  Photo: Courtesy of Infiniti.

However, a performance road course has been set up on the edge of the airstrip for the Q60. The Q60 is the spiritual successor to the G35 sports car. The performance course runs through hardpacked and softer dirt, allowing—nay, encouraging—a driver to force the car into long power slides and Scandinavian flicks. The idea is to get the car to slide through the corners.

And, with 400 hp out of the 3-liter twin-turbo V-6 and rear-wheel drive, it does that, in an exciting and engaging way. I run the course again and again and again, spraying dirt. It serves to remind that when it comes to luxury vehicles—in the past, today, or the future—they have to do more than coddle and comfort. They have to excite.