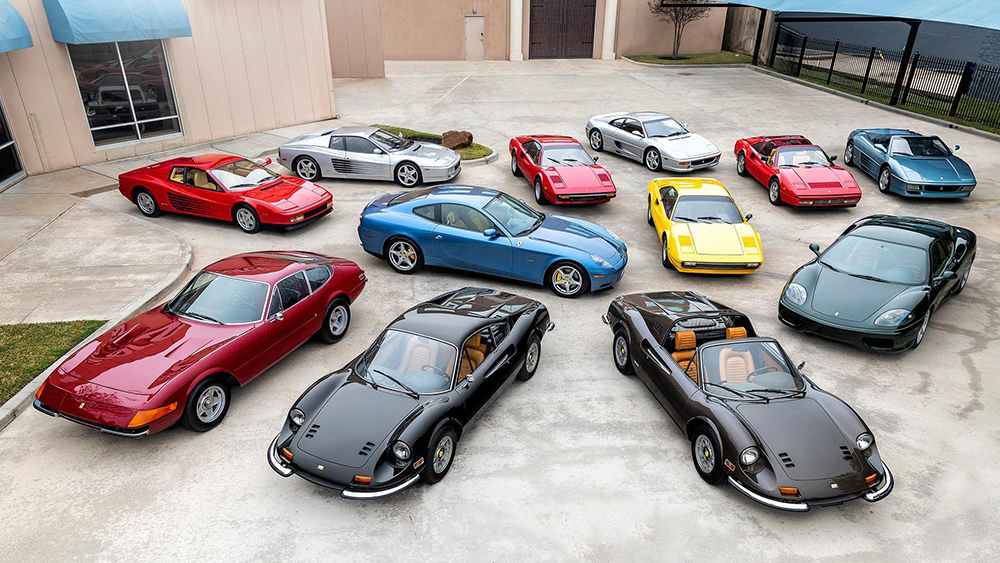 Ferrari enthusiasts, take note: A band of beautiful Prancing Horses is up for auction.

Bring a Trailer has teamed up with Texas-based dealership DriverSource to sell 12 pristine manual Ferraris over the next few weeks, all of which feature the marque’s signature gated shifter.

The aptly named Gated Collection, which is comprised of road cars built between 1971 and 2005, illustrates the growth of the nameplate across four decades of production. You can expect both classic and contemporary rides, with an array of engines and cylinder counts.

Coincidentally, the oldest and newest cars in the collection are both front-engine 12-cylinder touring cars. The rare 1971 365 GTB/4 Daytona is finished in Rosso Nearco and features a black leather interior with red carpets. Treated to a full refurb in 2010, the mint-condition Berlinetta with a numbers-matching 4.4 liter Colombo V-12 is sitting at $510,000 at the time of this writing.

The 2005 612 Scaglietti, meanwhile, sports a gleaming Azzurro Argentina exterior over beige leather upholstery and is reportedly one of just 199 examples equipped with a six-speed manual transaxle. It’s presented with just 15,000 miles on the dial and is currently hovering at $128,000.

There are also several generations of mid-engine Ferraris on offer, including a 1977 308 GTB Vetroresina in Giallo over black leather and two coveted 1973 Dino 246 cars with consecutive chassis numbers that were completed just one day apart.

Further highlights include a sleek 1994 348 Spider that was reportedly used as a demonstration car by then-president and CEO of Ferrari of North America, Gianluigi Longinotti-Buitoni, along with a sought-after 1989 328 GTS built in that model’s final production year.

“The Gated Collection showcases the evolution of Ferrari road cars over the span of 34 years, with a focus on what unites them; no matter the engine location or cylinder count, these automobiles were created as tools for serious driving,” the auction house said in a statement.

So far, 11 cars from the collection have been listed for auction on BaT. There is still a coveted 1986 Ferrari Testarossa that will be added in the coming days. You can check out all of the listings here. Happy bidding.