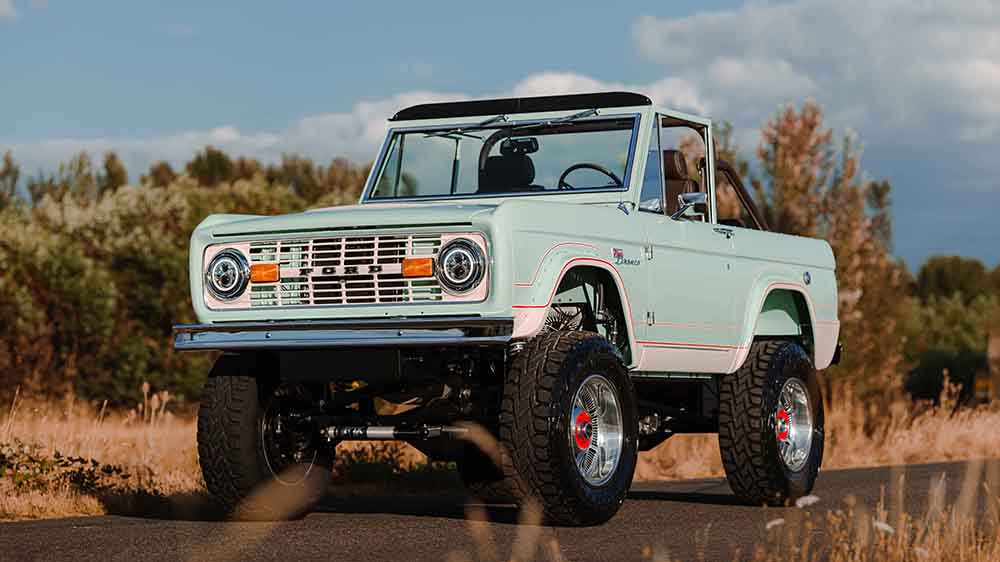 Automakers who are embracing the electric revolution. Custom shops are, too.

Gateway Bronco, which has been rebuilding the classic SUV since the middle of last decade, will now produce battery-powered restomods. That means you can commission them to build a zero-emission version of the legendary 4×4 with or without a top.

In addition to gas-powered two-door and four-door models, you can now build an all-electric Bronco through the Illinois shop. Each of the EVs comes equipped with a battery-powered crate motor. The electric mill is connected to a five-speed manual transmission—yes, EVs can come with stickshifts, even if there is still question as to how they work—that sends power to all four wheels and produces an impressive 400 horses and 800 ft lbs of instantly available twist, according to the brand. Thanks to this, you’ll be able to sprint from zero to 60 mph in less than six seconds, which is pretty incredible for a vintage Bronco, restored or not. Its lithium ion battery pack will also allow you to drive 300 miles on a charge.

Gateway’s first electric Bronco, the Luxe GT EV, has more than just a new motor, though. It’s also been equipped with a JRi suspension and a unique electric ride control package with three distinct settings: Firm, Sport and Luxury. Other features include a power retractable step, Wilwood brakes and 18-inch wheels in 33-inch Toyo tires.

You’ll be able to work with Gateway to design the Bronco of your dreams, both inside and out. The open-top Luxe GT EV is a pretty good inspiration point, though. The shop’s first battery-powered Bronco features a 1972 model year body and is done up in seafoam green and white, with a thin red pinstripe separating the two colors. It’s also been equipped with a four-point roll bar and projector LED headlights. Inside, you’ll find a vintage-style, three-spoke steering wheel, a custom dash with new gauges and a small touchscreen panel, as well as heated black leather seats with houndstooth inlays. There’s also a host of modern conveniences like a custom air-conditioning system, Apple CarPlay compatibility and a camera-equipped rearview mirror.

Gateway is taking commissions for its Bronco EVs through its website now. Be prepared to spend big, though; they start at $265,000. That’s more than a $100,000 more than its base level restomod but $35,000 less than its top-of-the-line builds.

Check out more photos of the Luxe GT EV below: