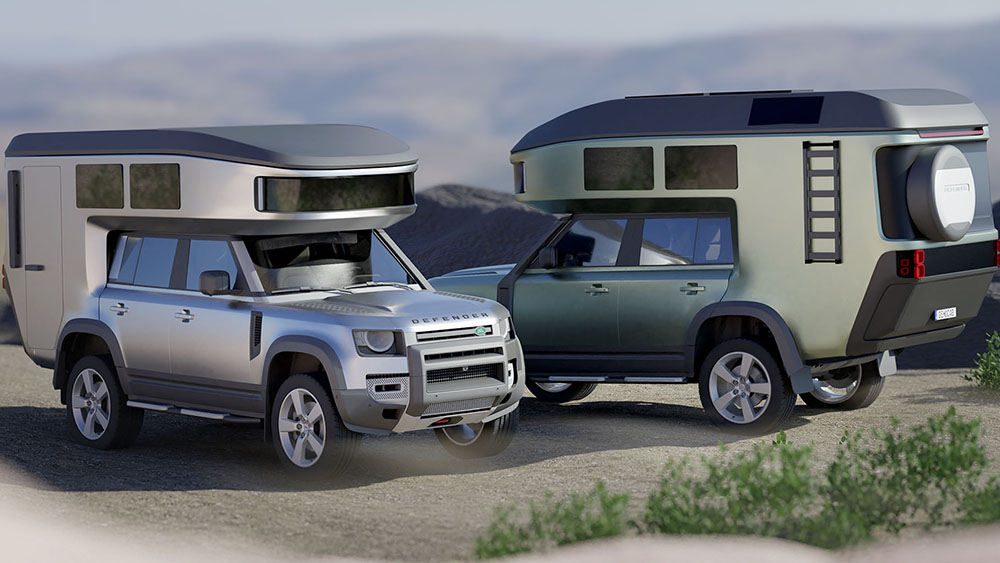 What’s better than a 2020 Defender? A 2020 Defender with a camper, of course. GehoCab has just unveiled an ingenious new rooftop setup that transforms the burly 4×4 into a traveling suite for two.

The design, known as Fiete, attaches directly to the chassis of Land Rover’s new pride and joy, which started rolling out Stateside this past July. While the German outfit has only released renderings of the camper at this stage, it appears to fit snuggly over the SUV, resembling the retro RVs of yore but with a modern, upscale edge.

The lightweight design is made from aircraft-grade carbon fiber and tips the scales at roughly 1,000 pounds. It’s compact by nature—measuring just 13 feet long by 6 feet wide—and blends in harmoniously with the driver’s cab, which is opened behind the C-pillar.

Despite its relatively small footprint, the renders suggest the camper will offer a bed for two, a table, an outdoor shower, a toilet and a full kitchenette in the rear.

Designed for off-road adventures, the cabin also features 90 liters of freshwater storage, a 29-liter compressor cooler, a gas cooker and plenty of seating space. Power, meanwhile, comes in the form of a 100 Ah LiFePO4 battery and 100 WP solar panels.

If you’re concerned about lugging the cabin about, the interior fixtures can be crafted from carbon fiber to lower overall weight. Buyers may also opt for a lower roof shape that reduces the overall height of the vehicle to less than 9 feet.

The best part? The ultra-light cabin is about to land atop of three other next-gen SUVs. GehoCab plans to launch the Fiete for the much-hyped Ford Bronco, along with the new Jeep Wrangler and the Mercedes-Benz G-Class.

If you’ve fallen in love with the Fiete, orders can be placed via GehoCab’s website with prices starting at $124,000.