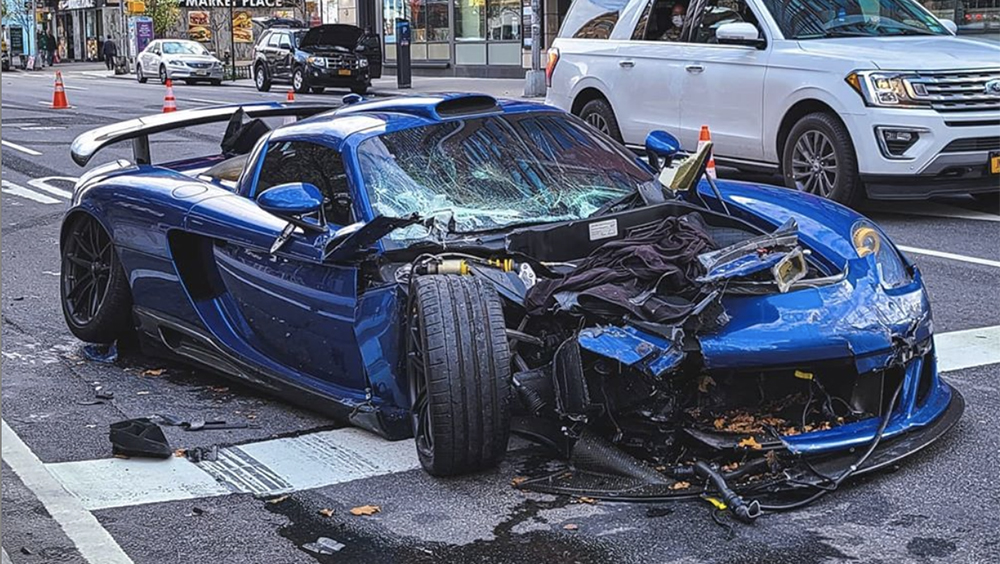 Life as we know it may have ground to a halt because of the coronavirus outbreak, but some things refuse to change. For some of our most well-to-do citizens, the global crisis doesn’t appear to have subdued the most self-centered impulses. Case in point: the owner of a Gemballa Mirage GT, who totaled his ultra-rare car after speeding through the streets of Manhattan early Tuesday morning.

Benjamin Chen, the owner of the highly modified Porsche Carrera GT, was arrested after crashing the speedster multiple times in a matter of minutes, reports the New York Daily News. And if all that wasn’t bad enough for Chen, much of the mayhem was captured and shared on social media.

Chen was arrested shortly after smashing the $750,000 Gemballa into the back of a parked minivan on Eleventh Avenue in East Midtown around 7:30 a.m. Though video shows that the car sustained major damage, that didn’t stop Chen, who continued south on Eleventh, crashing into even more parked cars before finally being pulled over by police near the intersection West 44th Street. The crashes occurred just blocks from the Javits Center, the home of the New York International Auto Show and currently a makeshift hospital for coronavirus patients.

Security video of the initial crash shows Chen losing control of the Gemballa before crashing into the van, believed to be a Toyota Sienna, and sending it flying half way down the block. Almost immediately afterwards, Chen restarts the car and speeds off down the street before what appears to be the hood of the Gemballa flies off and he crashes again.

Rough morning *photos taken by me*

Photos of the Gemballa posted to Instagram by Ronnie C. Photography show that it suffered extensive damage. The front passenger side of the car was almost completely sheared off, the windshield smashed and both axles appear to have been badly damaged during the crash. Chen looked woozy in videos shared online but appeared to fare better than his car, though the Daily News reports he was charged with reckless driving and operating a motor vehicle while impaired by drugs.

The Gemballa Mirage GT is based on the Porsche Carrera GT. The cars were heavily modified by the German tuner, which managed to boost the vehicle’s naturally aspirated 5.7-liter V10 power from 603 to 670 horsepower, reports Car & Driver. Only 25 examples of the speedster were every produced. Now, until Chen finds a way to repair his, 24 remain.