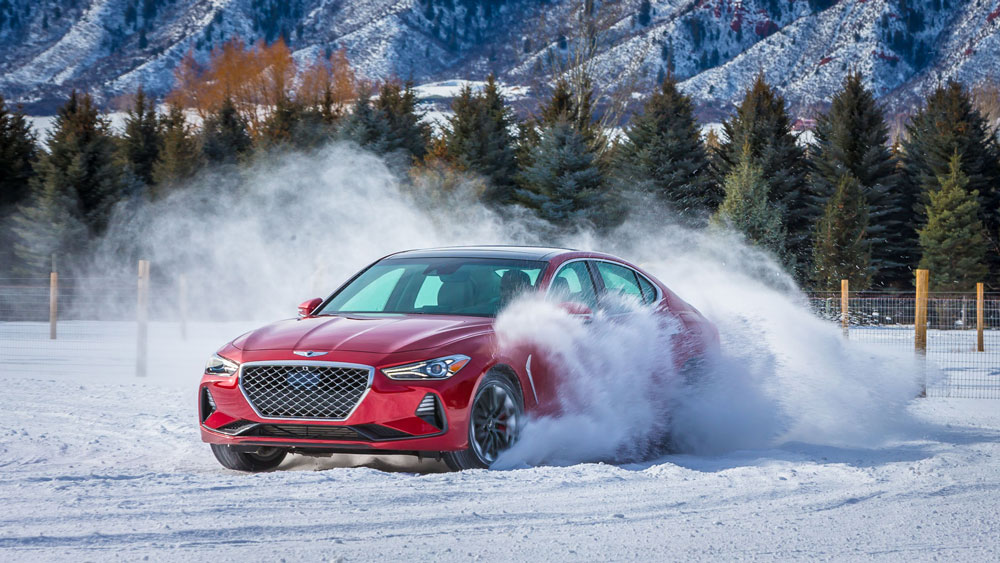 Genesis dubbed this “Snow Day”, and the name couldn’t be more apt. Referencing those magical, unexpected holidays from our youths—you know, when you’d wake up, look out the window and see the world buried under a blank of white. This day, spent behind the wheel of the Genesis G70 luxury sedan, offered the kind of joy on par with that felt by a 12-year-old liberated from math class.

As we counter-steered and squeezed the throttle of the G70’s 3.3-liter twin-turbocharged V-6, spraying rooster tails of snow across a field in Aspen, Colo., we were witness to Genesis’ vaunted performance claims. No, the G70 3.3 AWD Sport doesn’t offer the asphalt-melting power of modern super-sedans, but its segment-leading 365 hp and 376 ft lbs of torque are plenty to feel invigorated. Also, most milquetoast sedans don’t feature a “Drift Mode”, yet that’s exactly what we triggered on the G70 by pressing down on the Traction button for five seconds—shutting off not only traction control, but also the electronic stability control (ESC). The result? The magnificently calibrated AWD system was more than happy to funnel up to 100 percent of its power to the rear axle, allowing the spacious sedan to drift sideways in elegant, glorious sweeps across the winter course.

The inclusion of a Drift Mode is but one of the ways Genesis executives, engineers, and designers have mind-melded to create a superb saloon. Materials are top notch, including perforated leather seats with diamond-stitching like you’d find in top level German barges. There’s a bright head-up display, and active bolstering so when you dial it up to Sport Mode the sides of the seats squeeze inward, securing you more snugly. The nascent luxury brand even snagged BMW’s erstwhile “chassis guru” Albert Biermann from its high-performance M division to ensure the G70’s skeletal system was drum tight.

And the results show. Since its debut, the G70 has racked up awards and Best Of lists like a 70’s pinball wizard. By all appearances, the G70 ticks all the boxes. But don’t mention that terminology to chief operating officer Erwin Raphael.

“Checking boxes can be bad as well,” Raphael tells me later as we cut our way through the vertiginous passes of the Aspen Valley. “This was more about the passion, and a lot of intense conversation of: What do we want the customers to think when they look at this? What do we want them to say? How do we engineer the emotion for my customers? And then let’s get out there and design something that achieves that.”

As Raphael stresses, Genesis isn’t aiming to simply ape the luxury bonafides of their European rivals—they’re eager to pioneer their own path to what they think luxury should be. And while the mechanical and aesthetic expectations certainly are met, out-of-the-box innovations like their Service Valet even further push the definition of the term.

With Valet (complimentary for first 3 years of ownership or lease), Genesis will come to your home and pick up the G70 for any service or scheduled maintenance, and then deliver it back home when complete. “We’ve come to understand that time is the ultimate luxury,” Raphael explains as he negotiates yet another twisty in the Colorado mountains. “And it’s what we want to give our customers.”

On the snow course, we found the marque’s performance claims were more than confirmed.  Photo: Courtesy of Genesis Motor.

And that’s something to think about as you’re filling out an Excel spreadsheet marking the pros and cons of the G70 versus the established competition. But it’s not what I was thinking about while whipping the G70 around yet another trip of the snow course, spraying powder high into the Colorado sky like a confetti machine gone haywire. I was only thinking about being 12 years old again, and the joys of unexpected holidays.