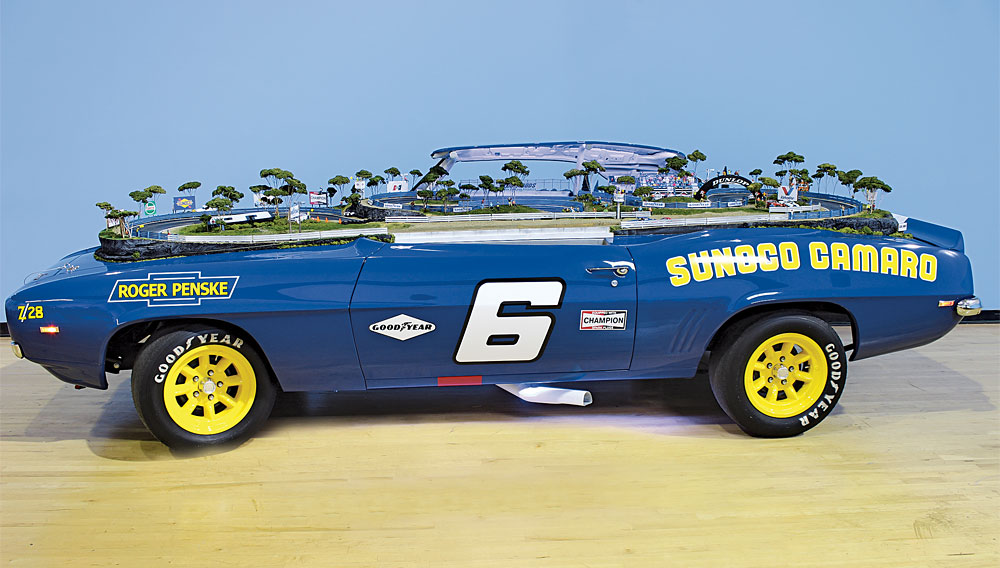 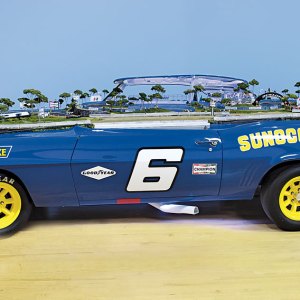 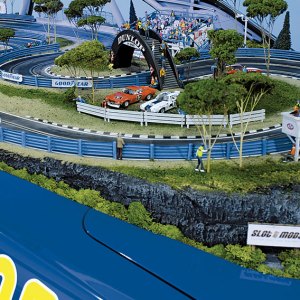 Now, Beattie is delivering a track in an ideal medium for any racing enthusiast’s garage or showroom—a life-size replica of the 1969 Roger Penske Camaro. The project had percolated in Beattie’s head for quite some time, and a client’s recent custom commission of a racetrack built into a replica Porsche 917K further intensified the 51-year-old’s desire to see his vision fulfilled. According to Beattie, the decision to build a Penske replica was an easy one, since Beattie has such fond memories of that racecar. “I had the original slot car of that car and I always liked historic racing,” Beattie explains. “I just fell in love with that car.”

The project, which took about seven months to complete, began with the steel body of a real 1969 Camaro Z28. Beattie then stripped and gutted the car and restored the body from the ground up. In fact, the car remains closer to a street-legal automobile than its current form suggests. “If you really wanted to, you could take this car, pull out the slot track, and rebuild it into a track car,” Beattie says. “When we first put it together and put the wheels on it, I just wanted to jump behind the wheel.”

Powered by a 30-watt analog transformer, the car is equipped with working rear lights and running lights, the hood liner is illuminated, and the car boasts the original Minilite wheels that the original racecar wore during its racing heyday. Inside is a 1/32 scale, 35-foot-long track that includes references to Watkins Glen raceway in upstate New York. “It’s an interactive work of art and automobilia,” Beattie declares.

Priced at $85,000, the track will be available for sale before the holidays, but because it’s a one-off project, interested parties may have to ante up more than that if other serious inquiries are made. As for Beattie, even though the track is the culmination of a dream that was years in the making, the slot car builder isn’t remorseful at the thought of letting it go. “I’ve built it and shown it and played on it, but I still have my own desires to tap into and my other projects to build and sell,” he says. “[Selling] this car will help me with the other projects that I have in mind.”