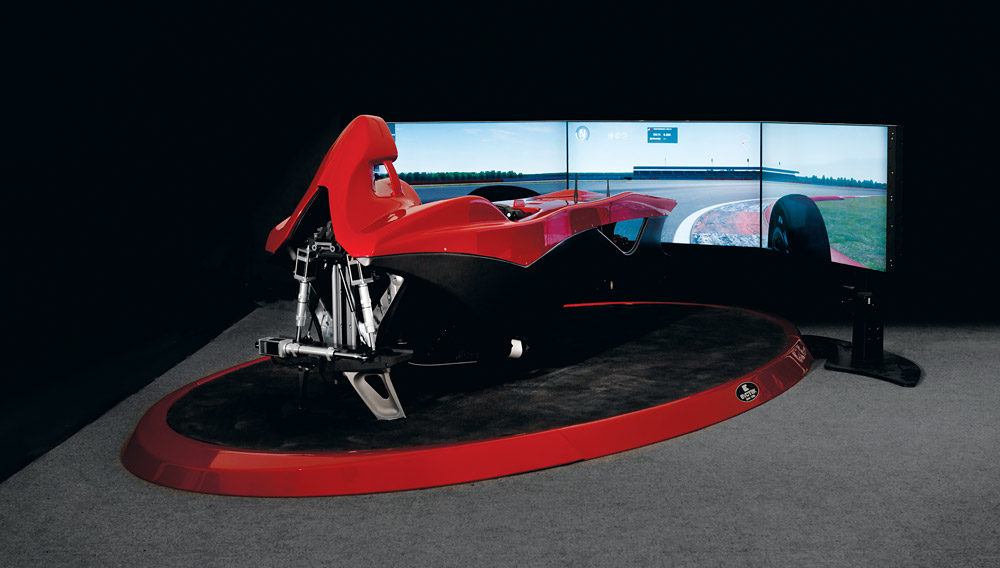 Evotek’s sym 026 Club Simulator isn’t for everyone, nor is it intended to be. When the designers and mechanical engineers at the Italian company mapped out a blueprint for a racing simulator that would stand apart from the others on the market, they turned straight to the source of the world’s greatest racing thrill: Formula 1. “The entire intention of the project was to create the best Formula 1 simulation,” says Brady Baxter, Evotek’s sales manager for North America. “Considering the market was almost secondary to that.”

Utilizing a team of engineers who had prior experience working as consultants for Ferrari and Maserati, Evotek essentially reverse-engineered a Formula 1 racecar. The simulator begins with a carbon fiber body shell made in two parts. The lower half serves as a platform for the necessary mechanical and electronic parts that the user interacts with, and, just like in a real Formula 1 racecar, every effort was made to reduce the weight of those components. The upper half of the body delivers a degree of realism by enclosing the cockpit. It’s also an element that Baxter says separates the simulator from its competitors. “The Italian design is very present with this,” he explains. “We wanted something that could be a thing of beauty, something that you could be proud to have in our home. That’s something that we’re quite proud of.”

For Loris Scagliarini, a partner and operating manager at Evotek, the simulator’s greatest asset is the overall performance and experience that it provides. The brake and accelerator pedals are constructed just as they are in a Formula 1 car; and the simulator’s steering wheel—just like an F/1 racecar’s steering wheel—is much more than an apparatus for changing the car’s direction. As Evotek’s literature explains, a modern Formula 1 car’s steering wheel contains 10 times the computing power that was used to launch the first astronauts into orbit. Much of that is included in this simulator. Users have the power to influence engine mapping, manipulate the car’s traction controls, fluctuate fuel mixtures, and even shift braking biases from the front and rear wheels.

Evotek’s simulator is available in two standard iterations—one centralized around three 51-inch plasma television monitors ($118,000); and one that utilizes a continuous, half-moon projection screen, which provides 180 degrees of panoramic views ($125,000). Regardless of the option, users are guaranteed a driving experience that can be as fun or as serious as they would like. “The movement that is generated is as close to real life as we can possibly go,” says Scagliarini, explaining that at the simulator’s highest level, the driving experience is 98 percent authentic to what a professional driver sees and feels on the track. “I don’t think you can get to 100 percent in a simulator,” he adds. “Not without adding wheels.”