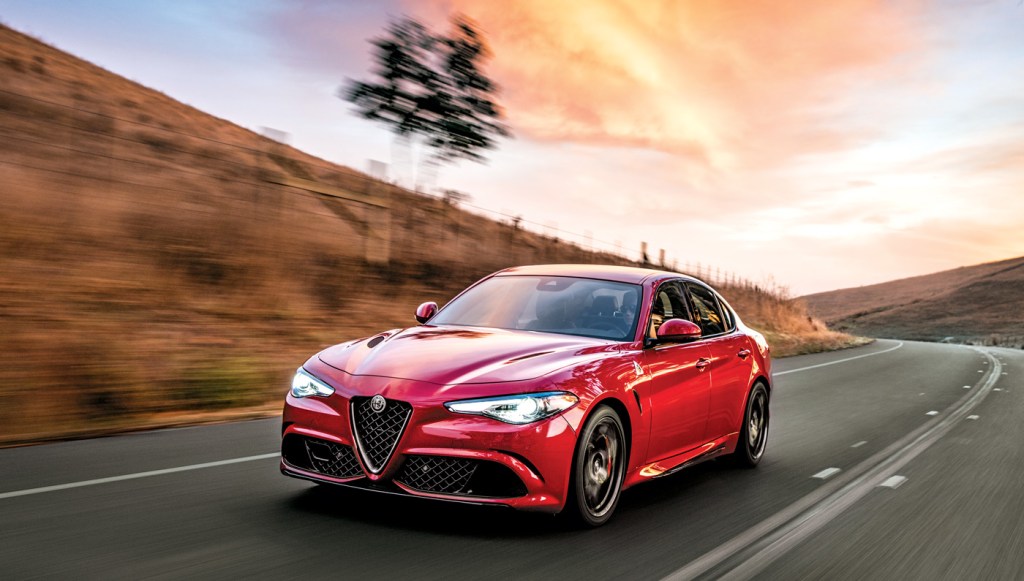 The Giulia Quadrifoglio, the high-performance variant of Alfa Romeo’s new sedan, went on sale in December with a starting price of $72,000.
View Gallery — 6   Photos 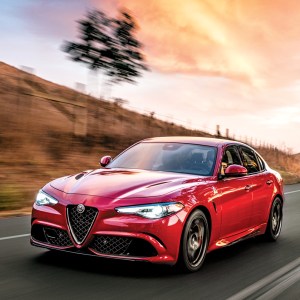 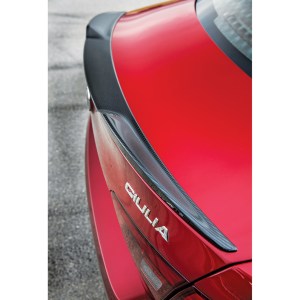 The top-of-the-line sedan is the brand’s most powerful production car ever.

Before the rain resumed, the other media members and I were treated to espressos and torrone and then hurried out of the garage and onto the pit lane at Northern California’s Sonoma Raceway. There, a group of driving instructors waited beside a line of Alfa Romeo Giulias that included examples of the Quadrifoglio, the $72,000 high-performance variant of the brand’s new sedan. Each Quadrifoglio was adorned with the namesake four-leaf-clover badge that has been the emblem of Alfa Romeo racecars since the early 1920s and has denoted its sportiest or most luxurious production cars since the early 1960s.

My instructor, Federico, motioned for me to get into the passenger seat; however, before I could, another instructor approached and initiated a heated exchange in Italian. As he spoke, he gestured at the right front tire, but whatever he was saying, it didn’t prevent Federico from hopping into the car and starting the engine.

Federico buried the gas pedal as we entered the front straight, the accelera­tion pinning me to my seat. The Giulia Quadrifoglio’s 505 hp biturbo V-6 engine is the most powerful ever for an Alfa Romeo production car. Together with a lightweight architecture that includes aluminum doors and a carbon-fiber hood and roof, it enables a zero-to-60-mph time of 3.8 seconds.

The Giulia Quadrifoglio, which has a rear-wheel-drive configuration, offers more than just straightaway speed. It demonstrated its agility while climbing the hill at turn 2 and crossing the blind crest into turn 3. The chassis is superbly stable, and the nearly 50/50 weight distribution

makes the car delightfully tossable. Alfa Romeo notes that at the Nürburgring Nordschleife—the German racetrack that serves as a proving ground for performance vehicles—the Giulia Quadrifoglio completed the fastest lap ever for a four-door production sedan.

The Giulia (and its variants), which Alfa Romeo unveiled in the summer of 2015, is an important car for the brand. The brand left the U.S. market in 1995, and since returning, it had offered only the 8C (through a handful of U.S. Maserati deal­erships, beginning in 2008) and 4C (starting in 2014), both relatively low-volume sports cars. Now it has entered the highly competitive midsize-luxury-sedan segment—with a model that takes its name from the lightweight, high-powered sedan that the company produced from 1962 until 1978. Instead of tiptoeing back into the sedan ring with an entry-level model, Alfa Romeo entered swinging. The line-topping Giulia Quadrifoglio, which went on sale in December, is more powerful and faster than its German rivals, the BMW 3 Series and the Mercedes-Benz C-Class. Its zero-to-60-mph time is a tenth of a second less than the BMW M3’s and two-tenths of a second less than that of the Mercedes-AMG C63 S.

“We’re taking a top-down approach,” explained Reid Bigland, the head of Alfa Romeo and Maserati (both brands are owned by Fiat). “Instead of making a high-performance car out of a base model, we’re starting with our top-of-the-line car.”

The $38,000 base model and the $40,000 Giulia Ti (turismo internazionale)—which features 18-inch aluminum wheels, wood interior accents, and other upgrades—went on sale in January. Each is powered by an all-new 280 hp 2-liter direct-injected, turbocharged inline 4. Later this year, for the 2018 model year, Alfa Romeo will expand its lineup even further by offering various variants of the Stelvio, a midsize SUV.

When we returned to the pits after a lap around the 12-turn, 2.5-mile track, the passenger-side front tire was smoking. Maybe Federico should have listened to his colleague. But no harm was done, and after a tire change it was my turn to get into the driver’s seat. However, a light mist was now falling, making the pavement too slick for any driver to push the Giulia to its limits. Nevertheless, Federico, from the passenger seat, ensured that I got a good sense of the car’s capabilities. His English is limited, and so his instructions consisted mostly of just three words: wait, brake, and gas.

While the hard acceleration tickled the pit of my stomach, the 8-speed ZF automatic transmission shifted seamlessly. Drivers who still like to row through gears will bemoan the fact that Alfa Romeo isn’t offering the manual-transmission option in the U.S. market; the brand’s market research predicted that less than 1 percent of buyers would want it. The optional carbon-ceramic brakes delivered a big initial bite, and the adaptive suspension, when set in dynamic mode, offered enough slip to let the back end slide around a little while still keeping us in check. The track was too wet for race mode, which minimizes intervention from the electronic stability control. (The driver in front of us may have been testing the race mode when he took the Zanardi line through the mud at turn 9a.)

The Giulia’s steering wheel is thin, making it easy to wrap even small hands around it. The steering system offered plenty of feedback without feeling overly heavy while we threaded the S turns. Just as satisfying was the exhaust system’s growl, which Alfa Romeo engineers say is completely natural and not enhanced through the speaker system the way that those of some other brands’ cars are.

Although the Giulia Quadrifoglio is a high-performance vehicle, a road drive after the track time showed that it can also serve well as a daily driver. It has enough space for luggage and passengers, though the rear seats are snug, as they are in other cars of this size. Leather upholstery is standard, and the instrument panel includes an attractive and well-integrated wide-screen display.

We sped west toward the Pacific, piercing the curtains of mist that hung on the road between the vineyards, where the colors of the leaves had turned crimson, amber, and gold. We turned north at Highway 1 and wound through groves of eucalyptus trees on the bluffs above the ocean. At the town of Bodega Bay, we stopped at a restaurant to shuck and eat fresh oysters. Other customers on their way in and out of the restaurant took notice of the Giulia where it sat in the parking lot. They may not have known what kind of car they were looking at, but in an area saturated with cars bearing roundels and three-pointed stars, it stood as an attractive alternative. Alfa Romeo (alfaromeousa.com)