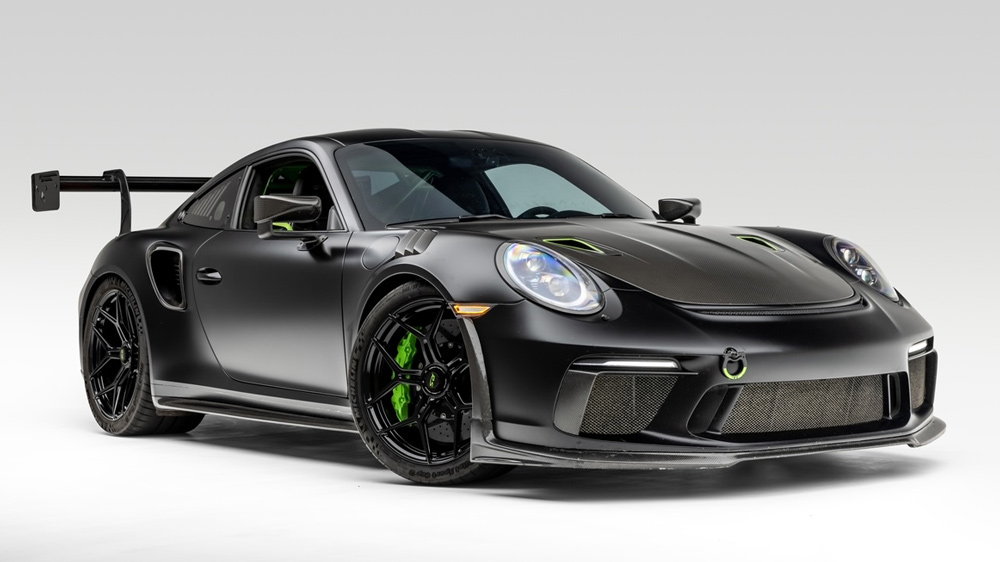 Porsche’s 911 GT3 has been a favorite of Porschephiles since the 996 series GT3 debuted in 1999. Each successive release has established a new performance benchmark for track-oriented street cars, with the GT3 RS topping the list. We’ve yet to see a 992-series RS, but the previous generation, introduced in 2018, remains one of the most capable driving partners on both the road and racecourse. Naturally, it’s the perfect subject for some intelligent tuning.

Global Motorsports Group (GMG), founded in 2001, is known for its work dialing-up performance for Porsche, McLaren, Lamborghini and Audi models. “Our company started out of a passion for motorsports and racing,” says James Sofronas, president and owner of GMG, located in Santa Ana, Calif. “We have a 30,000-square-foot facility dedicated to supporting our clients’ needs with maintenance, aftermarket-performance tuning and turnkey customer-racing programs.”

Sofronas loves Porsches, so naturally, GMG has developed a tuning package for the GT3 RS that’s aimed at rally-oriented drivers who want to extract the most from the model while keeping it within street-legal compliance.

Car enthusiast and collector Harrison Woodruff recently brought his 2019 Porsche 911 GT3 RS, which has been tailored and tuned by GMG, to us for a show, tell and spin. His Porsche looks like a 911 GT3 RS all right, but it’s considerably more ominous. The 3M matte-black wrap sets off the carbon-fiber bodywork from 1016 Industries. GMG’s formula for building the ultimate rally machine not only reduces weight with lighter carbon-fiber panels, but enhances performance with a variety of engine and suspension improvements that Woodruff specified as part of the package.

“The GT3 RS is a fantastic machine,” says Woodruff, “and we are really happy with how our partners worked to make this remarkable custom even lighter and faster. This is a really fun driver’s car, which is what everyone wants on a rally.”

The 3M matte-black wrap sets off the carbon-fiber bodywork from 1016 Industries.  Photo by Ted Seven, courtesy of Global Motorsports Group.

Engine performance and power benefit from upgrades by Gintani, the Los Angeles–based specialty shop whose tuning increases output to more than 580 hp. Straight pipe headers further improve efficiency, and Porsche’s factory mufflers were removed to further boost the machine’s overall muscle. Producing a robust engine note with even more edge than with the stock exhaust system, GMG’s revised GT3 RS attracted lots of attention when it pulled into our parking lot, largely because of a rear wing that would turn an albatross green with envy.

Together, the wing and front splitter—each supplied by Dundon Motorsports—provide even greater on-road stability and ferocious downforce, as well as contribute to the vehicle’s sharper handling. Yet ground clearance is manageable on city streets, especially in conjunction with the factory’s axle-lift system, a sensible option for any GT3 owner who wants to keep the front end intact.

GMG race mirrors replace those from the factory and allow for a wide-screen view of things arears. Through its 9 Design division, 1016 Industries integrated custom carbon-fiber components, including the hood and front and rear bumpers. Rear quarter windows have been replaced with acrylic glass to further reduce weight. The latter feature a black-out pattern that allows for some outward rear vision. Also notable are the custom center-lock aluminum wheels—with a pattern envisioned by Woodruff and GMG—that present an intricate webbed design, while Lizard Green brake calipers peer out from behind the black spokes.

Continuing the green theme is under-glow lighting from LEDGlow that complements the matte black while making the machine more visible in the dark. Inside, a roll cage (in Lizard Green, of course) is a sensible addition for rally and track. And in deference to real-world speed limits, a scanner and radar system from Uniden keeps drivers on the right side of the law.

Woodruff’s Porsche isn’t a garage fixture but is driven with gusto in rally events, and the owner is happy to pile on the miles. He’s participated in the Savage Rally, Gold Rush Rally and Nu Rally, and plans to enter next year’s Run to Monaco, which will drive through Rome, Tuscany and Portofino before concluding in Monaco. If you’re in the region, look—and listen—for a black-and-green flash.