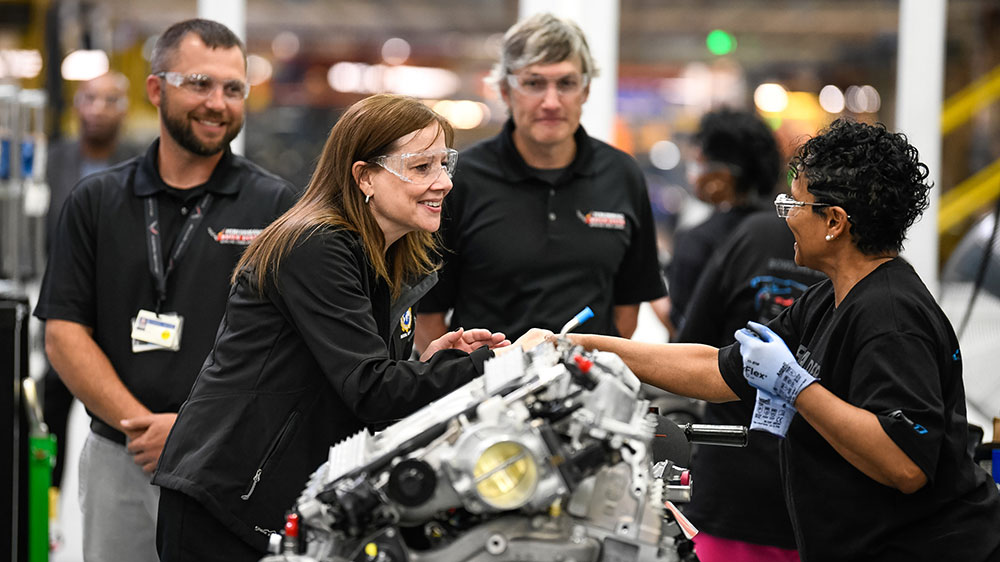 Ahead of the July 18, 2019 reveal of the brand new mid-engined C8 Corvette, General Motors CEO Mary Barra dropped down to the Corvette assembly plant in Bowling Green, Kentucky, to announce that a second shift and more than 400 hourly jobs would be added to help build the sports cars. That’ll kick the total tally of the plant’s workforce to more than 1,300 people.

While the first Corvette debuted in 1953, the Bowling Green facility has been open since 1981, and more than one million Corvettes have rolled off that line. GM has steadily been pouring money into the facility since 2011, about $900 million, which has helped create a new body shop, increased engine build capacity, a new paint shop, a new Performance Build Center and other upgrades.

A General Motors employee works on the Corvette assembly line Thursday, April 25, 2019 in Bowling Green, Kentucky. GM announced today, the company is adding a second shift and more than 400 hourly jobs at the Bowling Green plant The second shift and additional jobs will support production of the Next Generation Corvette, which will be revealed on July 18.

With the increase in staffers, that would indicate that GM is anticipating high demand for the mid-engined C8 Corvette, a vehicle that has been kicking around in development for what feels like ages at this point. Bowling Green will be where the C8s destined for various parts of the world will be assembled, so the crew will be making right- and left-hand drives there. Rumors still swirl about a twin-turbo, high performance V-8 being added to Bowling Green’s duties, too. The last front-engined ‘Vette will be built in June.

When GM sent out the press release announcing the good news, the eagle-eyes over at Car and Driver spotted something interesting in the file name of the new photo that accompanied:

Chevy’s new image of the C8 also gives us another little detail about the car: the URL of the photo includes the phrase ZERV, which was the car’s code name during its development. ZERV is a play on Zora Arkus-Duntov’s mid-engined CERV concepts of the 1960s, [Zora is effectively the father of the Corvette] and Chevy admitting to the code name makes us again think the C8 (or a version of it) could receive the long-rumored Zora moniker, like how the current car is called the Corvette Stingray.