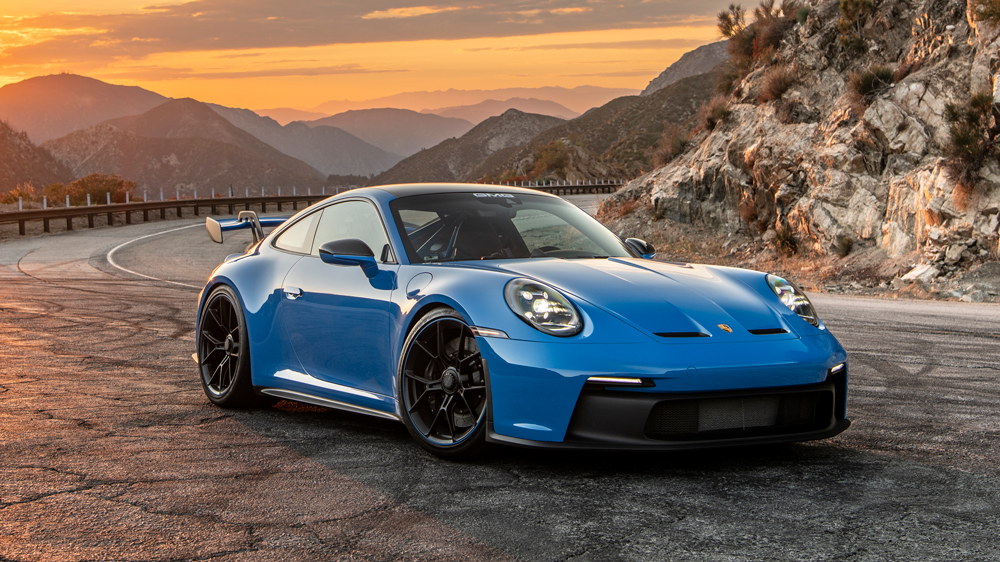 A graded construction site along an avenue inside the Thermal Club, in Thermal, Calif., may seem unrelated to GMG Racing’s modified 2022 Porsche 911 GT3 over in the paddock, but it’s not. I watch, helmet in hand, as the mighty GT3, swaddled in a wizard’s cloak of Shark Blue, warms up on pit lane before howling around the track with a fellow automotive journalist behind the wheel. I’m up next for a couple of reconnaissance laps with James Sofronas, founder of Global Motorsports Group (GMG) and its race division, before getting my own chance to go solo.

Refined to deliver elevated performance on both the street and track, this enhanced 911 GT3 is a test bed for parts development, elaborating every idea hatched up by Sofronas and his team. Founded by Sofronas in 2001, GMG operates in a 30,000-square-foot facility in Santa Ana, some 135 miles away, near the coast.

“Thermal has been a godsend for any automotive enthusiast or racer,” says Sofronas, who joined the private, residential racetrack club in 2014. “We love this place for all the obvious reasons—and then being able to bring our cars out here to test, tune and develop.”

For the past 15 months, GMG Racing has occupied an 8,000-square-foot building near the paddock for servicing and storing its own cars, as well as those belonging to its customers. The freshly graded dirt, though, represents the future of the division’s arrive-and-drive program. It’ll be a 20,000-square-foot enclave with seven bays for clients like tennis great Pete Sampras, whose revised 991-series 2019 Porsche 911 GT3 RS is also on the track today. It was GMG Racing’s previous 911 project car, and Sampras purchased it after the development process.

Already a highly capable performer in stock trim, the 992-series 911 GT3, introduced for the 2022 model year, represents a sweet spot in the sports car world. Yet as good as it is off the showroom floor, it nevertheless invites modifications that will wring out even more performance. Our test car, for example, carries a lightweight exhaust system and suspension upgrades such as adjustable front thrust arms and rear control arms. Also included: the AP Racing Pro 5000R brake kit. GMG’s own roll bar is the most obvious safety upgrade, and there are also six-point harnesses. On top of the $161,000 base price for the car, total outlay for the suite of parts would be about $42,000, including installation, explains Allen Ward, GMG’s service manager.

Presenting the bolstered GT3 with an immediate visual cue as to its track focus are the 19-inch, center-locking Forgeline GE1R wheels wrapped in Pirelli P Zero slicks with tire-pressure monitoring sensors. (Add $13,000 for the set of four.) The overall aesthetic sure looks racy, and after my colleague’s two solo laps, I’m happy to climb in and be the passenger while 54-year-old Sofronas familiarizes me with the circuit. Sofronas has been racing since 1992, when he made Boston-area sales calls for Pitney Bowes in the same Nissan NX2000 that he ran in SCCA Showroom Stock B competitions. He had to wear a business suit for his sales calls; the NX2000 did not have air conditioning.

This GT3 has air conditioning, and we need it as the mid-October afternoon reaches 100 degrees. Out we go on our warm-up laps, and I feel the sticky tires grip and see driver precision rewarded. The roll stiffness of the chassis is incredible. In a fast left-hander, the rear downforce becomes obvious as the right corner hunkers down. When Sofronas accelerates through a couple of gears on a straightaway, the tach needle flicks well above 8,000 rpm and the shriek from the 4.0-liter six-cylinder is what I imagine a pack of Pleistocene-era antelopes sounded like under attack from saber-toothed tigers.

Utterly enthralled, I’m anticipating my own laps to come when, suddenly, an indicator light twinkles and we have to exit the track and bring the car to GMG’s onsite facility to investigate. The digital quirk would eventually be traced to the fact that the standard 20-inch front wheels and 21-inch rear wheels were replaced by those 19-inchers—that was it. Unfortunately, by the time the car was diagnosed and finally ready, the 4 p.m. deadline arrived to end the day’s track activities. That’s OK, though, because if GMG Racing does a 992-series 911 GT3 RS, guess who’s going first.