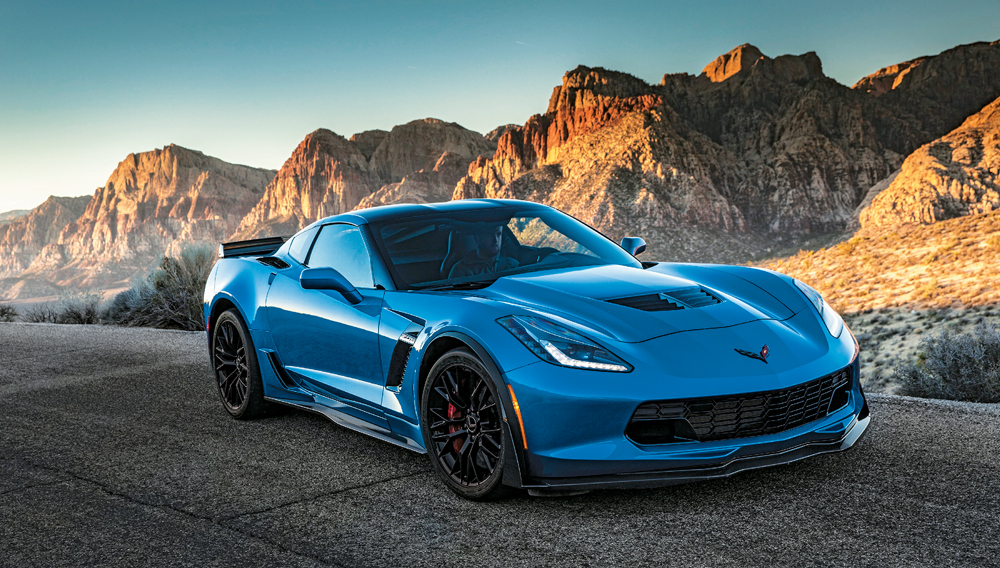 The Corvette Z06 has posted unprecedented performance marks for the automaker.

General Motors has good reason to call the 2015 Chevrolet Corvette Z06 “one of the most capable vehicles on the market.” It accelerates in a flash, stops on a dime, and provides more horsepower per sticker-price dollar than perhaps any other production car.

It is also the first Z06 available with an optional automatic transmission. When equipped with the 8-speed, paddle-shifted gearbox and the Z07 performance package (which includes 40 percent stiffer suspension, bodywork that is more aerodynamic, Brembo carbon-ceramic brakes, and Michelin Pilot Super Sport Cup tires), the Z06 accelerates from zero to 60 mph in 2.95 seconds (and in 3.2 seconds with the standard 7-speed manual). That is the fastest zero-to-60-mph time of any front-engine, rear-wheel-drive production car. With the automatic transmission and Z07 package, a Z06 also posted the fastest time ever for a production car tested on GM’s 2.9-mile test track, beating the Corvette ZR1’s record by a full second. It also achieved the best braking performance of any GM production car (from 60 mph to a stop in 99.6 feet), and it produced the most downforce of any car ever tested at GM’s wind tunnel.

While the new Z06 boasts a number of firsts—features and rankings—it also represents a long-standing production practice with the Corvette. The original Z06 was conceived in the early 1960s by Zora Arkus-Duntov, the GM chief engineer who helped transform the Corvette from a docile roadster into a world-class sports car in the mid-1950s. After the Sports Car Club of America banned factory-sponsored racing, he wanted to provide a performance package for Corvette owners who would continue to race their cars. Thus, since launching the Corvette’s second generation in 1963, the company has produced the Z06 and other top-tier variants (including the aforementioned ZR1) that are comparable to the highest-performance European sports cars—vehicles that cost twice as much or more. The new Z06 has a starting price of just under $79,000. A convertible (the first Z06 convertible since 1963) will arrive later this spring with a price tag of about $84,000.

During a test-drive earlier this year at the Spring Mountain Motorsports Resort in Nevada, the Z06’s outrageous thrust—accompanied by a blast from the car’s four tailpipes—made short work of straightaways, and the automatic transmission delivered well-timed, lightning-quick gear changes. Chevrolet claims it shifts faster than Porsche’s dual-clutch PDK transmission.

The Z06 was sure-footed when turning into corners, thanks in part to Chevrolet’s Performance Traction Management system, which anticipates power slides and adjusts the engine torque accordingly. As promised by their record-setting stopping distance, the Z07 package’s carbon-ceramic brakes were strong and fade free. Another optional feature, the Performance Data Recorder, enables drivers to document and review their track laps. It uses a forward-facing camera to record high-definition video, which is overlaid with data for engine rpm, gear selection, throttle and brake pressure, and steering angle.

GM has long billed the Corvette as America’s Sports Car. While lauding the Z06’s capabilities, it is calling this ’Vette America’s Supercar. The designation fits the performance.