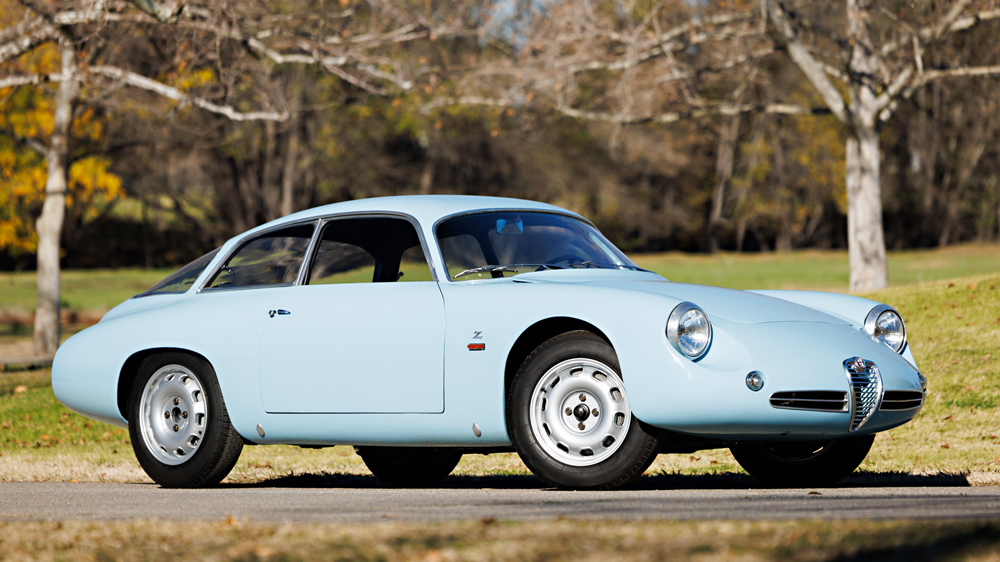 Few marques are as old, storied and responsible for so many remarkable designs as is Alfa Romeo. Founded in 1910, the automaker made its name in motorsports from the very beginning, and picked up following World War II almost without missing a beat. But the market in Europe for large, luxury cars was gone by then, and Alfa Romeo, along with other European manufacturers, focused on greater production volume of smaller-displacement sedans, coupes and two-seaters.

Alfa Romeo’s Giulietta series, introduced in 1954 and wearing bodies by Bertone and Pinin Farina, really hit the spot, in part due to Alfa’s twin-overhead cam, four-cylinder engines that would become a hallmark of the brand, from the first 1.3-liter version to the final 2.0-liter mill that remained in production until 1995. And so, race cars derived from the Giulietta became a staple on circuits across Europe and the Americas.

Going faster, however, meant losing weight and getting slipperier, and nobody in Italy did aerodynamics better than Milanese coachbuilder Zagato, Alfa’s neighbor and frequent collaborator that remains the only independent family-run business left among Italian coachbuilders. And this diminutive Giulietta SZ Coda Tronca, offered by Gooding & Company, is surely one of the loveliest jewels to come out of that collaboration.

Italian for “cut-off tail,” the Coda Tronca incorporated the latest aerodynamic solutions for which Zagato was famous. It began when a client with a wrecked Giulietta Sprint Veloce (SV) took his car to Elio Zagato in 1956. The coachbuilder created a lighter, more streamlined body that made the SV competitive with heavier, larger-displacement cars. Observing the success of other Alfa owners who did the same to their SVs, the factory contracted Zagato to build a limited run called the Giulietta SZ (Sprint Zagato). Built on the short-wheelbase Giulietta Spider chassis, it wore lightweight aluminum body panels, used plexiglass windows and had a very sparse interior that featured tube-frame bucket seats upholstered in vinyl.

Customer deliveries began in late 1960, and the model variant quickly established its dominance in the 1300 GT class. About 200 examples were eventually built, including approximately 30 with the more aerodynamic Coda Tronca bodywork designed for high-speed circuits like Monza and Le Mans. The body style was distinguished by a longer front nose and Kamm-tail rear end. The heart of the little machine was its high-performance tipo 00120 engine, a 1,290 cc DOHC aluminum inline-four power plant with two big Weber 40 DCOE2 carburetors. So equipped, it snarled with 100 bhp at 6,500 rpm. Advanced for its day, it had a five-speed gearbox and finned aluminum drum brakes.

According to factory records, chassis No. AR10126.00195—one of the final Coda Troncas built— was completed on February 14, 1962, and was finished in Azure, Alfa’s signature sky blue. Italian registration records—included in its history file—show that this SZ first sold to Fedele Cova of Rome and was registered as “Roma 517904.”

Comprehensive provenance shows the car changing hands through a few Italian owners before coming to the US and then going to Japan. It eventually made its way back to Italy and, finally, to the US again, following a restoration by Classic Motors of Como in the early 2000s, where it was mechanically overhauled and received a bare-metal repaint in its original Azure color.

Notably, this example is fitted with important SZ-specific components such as the correct tipo 00120 engine and three-shoe front brakes. Among the most desirable postwar Alfa Romeos, this Coda Tronca is currently available from Gooding & Company for $725,000.