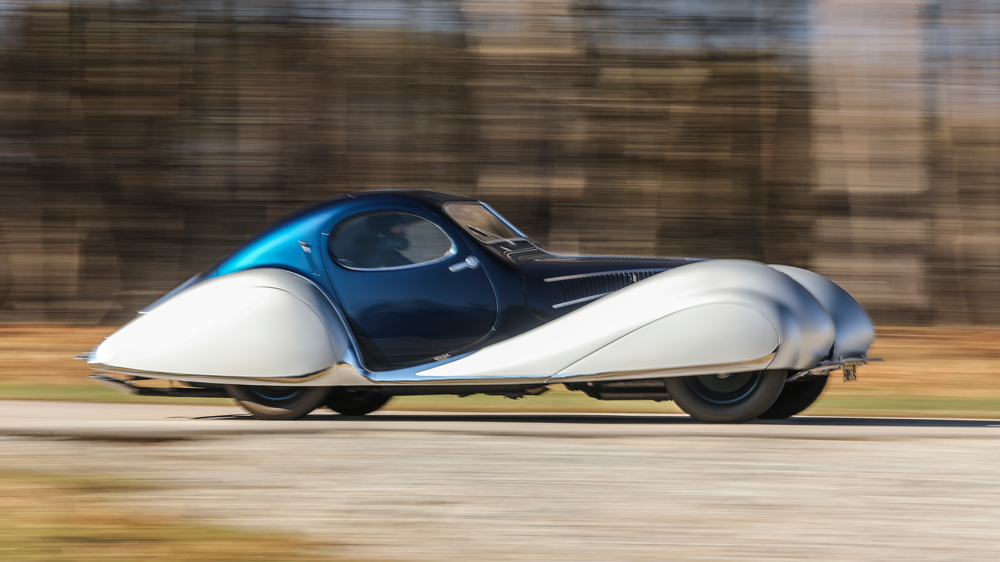 Like a hovercraft cruising over choppy seas, the collector-car market rode above the economy’s troubled waters this past year with auction-house results that continue to belie lingering fears of impending recession. Among those rising the highest was Southern California–based Gooding & Company, which hammered through $212 million in sales during 2022, the second greatest tally in its nearly 20-year history.

Founder David Gooding and his team had 597 lots successfully cross the block during events at Amelia Island, Fla., Pebble Beach, Calif., and London, as well as two multi-day online auctions. And although the average price per vehicle was an impressive $695,375, three cars in particular drove Gooding’s bottom line toward the top.

Already estimated to break into the eight-figure realm, the 1937 Talbot-Lago T150-C-SS Teardrop Coupe presented at Amelia Island fetched $13,425,000, and is now claimed by Gooding & Company to be the most expensive French automobile ever auctioned. It wears the famed coachbuilder Figoni et Falaschi’s Modéle New York body styling—the automotive definition of art deco, with voluptuous curves most notable in the wheel arches, especially those in front that resemble the curl of a wave. And the greenhouse appears to be an early inspiration for Darth Vader’s helmet.

Despite being powered by a 3,996 cc inline-six engine making roughly 140 hp, this example—chassis No. 90107—appears to have been more suited to the concours lawn from the start. It earned the Prix d’Excellence award in Paris at the 1938 Concours Fémina, and later took a class win at Pebble and Best of Show at Amelia Island. Its acclaimed past helps keep Talbot-Lago’s own legacy alive, as the automaker was shuttered in 1959.

Gooding & Company presented one of the most famous model variants in the world, and another art deco masterwork, at its 2022 Pebble Beach Auctions held August 19 and 20. The iconic 1937 Bugatti Type 57SC Atalante offered—chassis No.57523—was one of only 17 built and is touted by the auction house as “arguably the finest extant,” which easily explains its high-end estimate of $12 million. When the gavel dropped, though, the final price was $10,345,000.

Designed by Jean Bugatti, son of the French marque’s founder Ettore Bugatti, the Type 57 was his automotive ne plus ultra, and the Surbaissé Compresseur (SC) was a lowered and supercharged version that also included the near-mythic Type 57SC Atlantic, of which only three of the four made are still left. What contributes to this Atalante’s already rarified status is that it comprises the original chassis and body, making it an exquisite remembrance of the younger Bugatti, who died in a car accident just two years after this example left the factory.

Rounding out the winning trifecta is a Prancing Horse with impressive motorsport pedigree, a 1960 Ferrari 250 GT SWB Berlinetta Competizione—a highlight of Gooding & Company’s London Auction on September 3. Ferrari’s revered 250 model line became a racing mainstay, and its short-wheelbase (SWB) Berlinetta was a key player, finishing first at the Tour de France Automobile three consecutive times from 1960, the year chassis No. 2021 GT was made. Bodied by Carrozzeria Scaglietti, this particular 12-cylinder racer has a resume that includes Le Mans and Goodwood, provenance that surely contributed to the car exceeding its high-end estimate of £7 million as bidding peaked at £7,762,500 (more than $9,378,000).

“The prized collector vehicles featured on the Gooding & Company auction stage truly speak for themselves as they set records and reach new benchmarks with each passing year,” stated David Gooding in the official sales-recap announcement. And it seems the auction house is keeping its foot on the throttle as it has already revealed that its return to Amelia Island in March will showcase four one-of-a-kind examples from Ruf, a 1964 Ferrari 500 Superfast and a 1955 Mercedes-Benz 300 SL Gullwing. That lineup alone is enough to jumpstart another milestone 12 months.