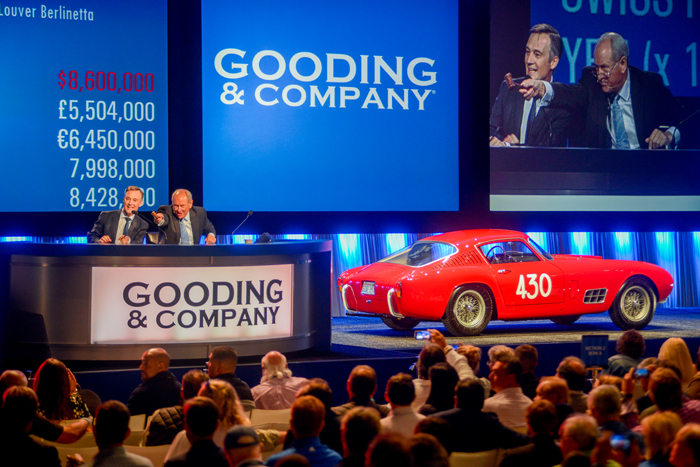 Gooding & Company, official auction house of the Pebble Beach Concours d’Elegance® and acclaimed for selling the world’s most significant and valuable collector cars, realized more than $53.7 million during the first of its two Pebble Beach evening auctions. Sixty-four of the 68 lots offered sold, a 94% sale rate and an average price per lot of $839,609, with the most notable being the 1957 Ferrari 250 GT 14-Louver Berlinetta (Lot 39) that set a world record for a Ferrari 250 Tour de France at $9,460,000.

One of only nine examples built and just eight remaining, the Ferrari 250 GT 14-Louver Berlinetta is an important competition car that features coachwork by Scaglietti and is unrivaled in its rarity and beauty. The ultimate Tour de France variant, this car boasts an important racing history including ninth overall and fourth in Class at the 1957 Mille Miglia and a fourth-place finish at the 1957 Coppa Inter-Europa. Additionally, it has won many accolades including a class award at the 2010 Pebble Beach Concours d’Elegance®.

Another record-breaking sale was of a 1997 McLaren’s F1. Enthusiasts the world over recognize McLaren’s F1 as a prime example of automotive technology and timeless design. Extremely rare-to-market, the car was accompanied onstage by its designer, Gordon Murray, who warmly described its inception. An elite car by many standards, this turn-key example sold for an impressive $8,470,000,  breaking the world auction record for the model after several rounds of competitive bidding.