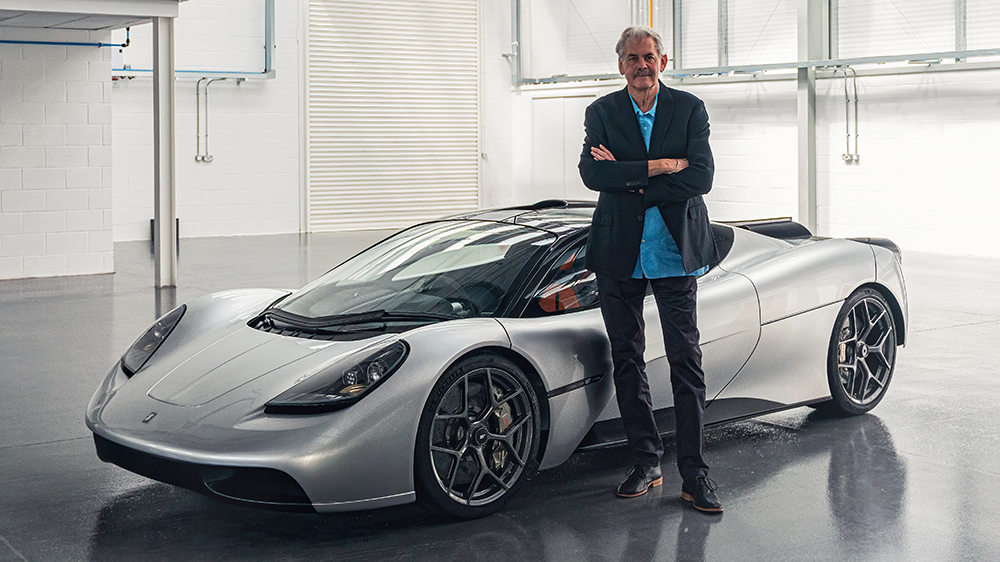 Decades after the McLaren F1 burst onto the supercar scene, the architect of its groundbreaking design famously couldn’t leave well enough. Gordon Murray remastered his winning formula by translating the F1’s core elements—a naturally aspirated V-12, the central seating position and three-pedal manual—into the T.50. The Cosworth-powered spaceship seemingly intended to take everything the F1 did, and do it better. The T.50 was followed by the slightly tamer T.33, which recently debuted alongside its big brother at The Quail, A Motorsports Gathering.

Robb Report caught up with the maestro himself at the Quail, where we picked his brain on how 30 years has informed his supercar sensibilities. For starters, we learned that there were things Murray “hated” about the F1, and things that “didn’t work.” Among his gripes, “The air con was rubbish, and the brakes were the best we could do at the time. . .the headlamps are like glow worms in a jar and rear deck too flat. The spine down the middle was always two inches too wide. Quite the list of critiques. He quips, “If I had my time again…”

That said, the T.50 is an overachieving beast of a three-seater with an operatic V-12 that revs to an astonishing 12,100 rpm. “Think of how long Ferrari has been doing V-12s, and we are 2,500 revs higher than Ferrari,” Murray enthused. “That’s amazing; if we were 500 more revs, you’d say that’s pretty good. Two and a half thousand—that’s on another level.” Too true, as our sit-down interview with Murray was interrupted by the dulcet sounds his creation revving to a proverbial 11 (or 12).

For a model that defers to a flagship, the T.33 is every bit as ambitious as you’d expect from the man responsible for the most groundbreaking vehicle in supercar history. Rather than incorporating a smaller V-8, it maintains a Cosworth V-12 which “only” revs to 11,100 rpm. Unlike the T.50, it is fully homologated for the US market, meaning owners don’t have to abide by restrictive Show or Display rules.

Part of the boutique brand’s messaging during Monterey Car Week touted their official entry into the US market, which appeared all well and good except for one thing: both audacious supercars are long sold out. Why the stateside presence? According to Murray, a play for more accessible offerings. “We’re currently working on three programs, all-electric,” he told us, “and all are higher volume—around 30,000 a year.” Interestingly, Gordon Murray Automotive is tackling SUVs next, the country’s most popular genre by far, which could benefit richly from a performance-focused mindset.

“This is where the aloofness falls away,” Murray adds. “We can honestly put our hands on our hearts and say, this [T.50 and T.33’s F1-inspired] iStream technology is in your electric SUV.” Of the two sport utes that will compete against mainstream marques, the supercar impresario says there will be one that is intended to weigh in at “a half-ton lighter than the average electric car.” For those in doubt of the automobile’s future, consider that the same mind imagined two exuberantly analog supercars aimed at the hyper elite, and two forthcoming EVs which should achieve unprecedented levels of efficiency, performance and attainability.