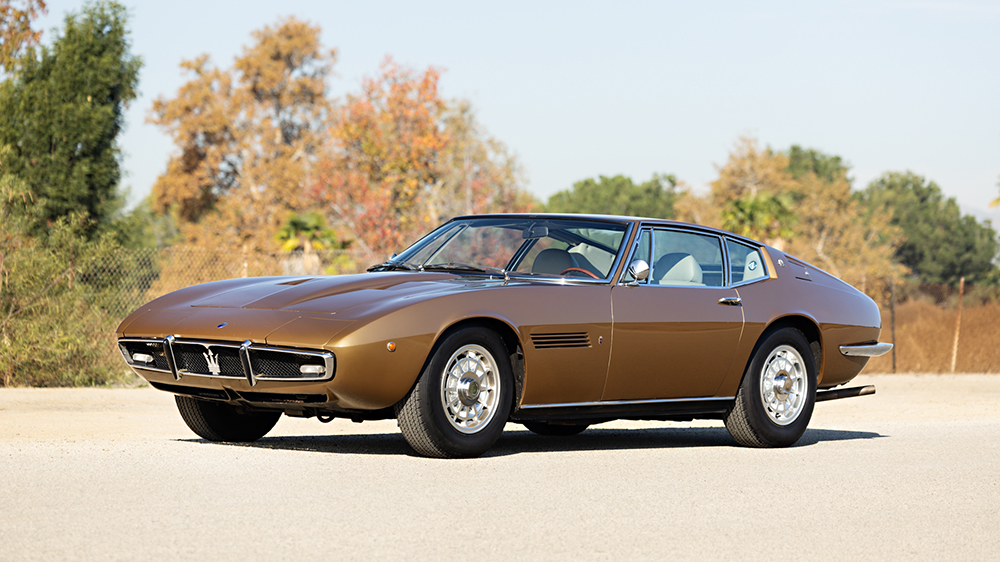 Collectors hungry for a dose of automotive nostalgia will soon have the chance to feast on one perfectly retro Maserati.

The car in question is a gorgeous light brown Ghibli 4.9 SS that rolled off the line in 1970. An oldie but a goodie, the classic four-wheeler will go under the gavel at Gooding & Company’s Scottsdale auction, taking place in January next year.

To recap, the Ghibli was first introduced as a two-seater concept car at the Turin Motor Show in 1966. Penned by a young Giorgetto Giugiaro, who was working for the Italian coachbuilder Ghia at the time, the first-gen Ghibli was characterized by a sleek, steel body, a shark-shaped nose and pop-up headlights. A clear rival to the Ferrari Daytona and Lamborghini Miura, it is still considered one of the most handsome cars of the 1960s.

Under the hood, the original Ghibli was powered by a 4.7-liter V-8 mated to a five-speed ZF gearbox. The production model, which started rolling out in ‘67, was equipped with additional seats and thus the Ghibli became a two-door 2+2 fastback coupé.

A few years later in ‘69, the Ghibli 4.9 SS was introduced with even more grunt. The stroked 4.9-liter V-8, which was good for 330 horses and 355 ft lbs of twist, gave the Ghibli a blistering top speed of 174 mph. This made it the fastest road-going Maserati at the time. Other noteworthy features include a double-wishbone front suspension with coil springs, a rear live axle with semi-elliptical leaf springs and four-wheel servo-assisted hydraulic disc brakes.

In all, just 1,149 coupés were built before production stopped in ‘73. The Ghibli did make a brief comeback in the ‘90s as a coupé with a twin-turbocharged V-6, but the current third-generation is an executive saloon that started rolling out in 2013. As such, models like this metallic beauty are especially sought-after among the Maserati faithful.

The car is in great condition both inside and out, too. A true time capsule, it even has its original engine, a classic wooden steering wheel and all the old-school instrumentation. It’s also been repainted in its original, factory-correct light brown metallic color scheme.

It goes without saying, this trip down memory lane will cost you. The auction house expects the Ghibli to fetch between $250,000 and $300,000 at the Geared Online event. The sale, which will be accompanied by an exclusive viewing event in Scottsdale, Arizona, will kick off on Monday, January 24 wrap up Friday, January 28.