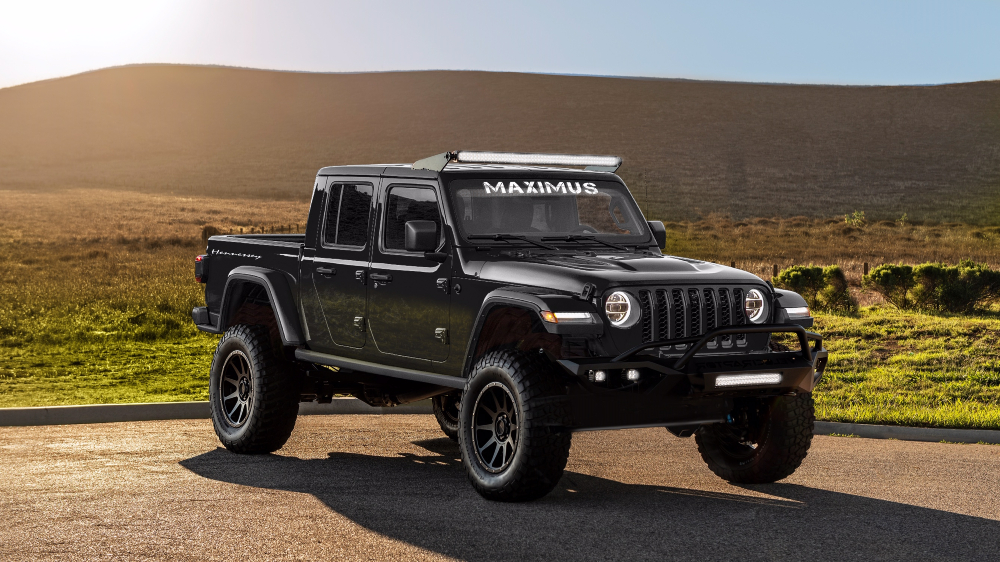 Are you not entertained? That’s the question Hennessey Performance is asking with its newest creation.

The Texas-based company’s latest modified vehicle—following in the footsteps of its altered VelociRaptor, Cullinan and Corvette Grand Sport— is a super-charged version of the 2020 Jeep Gladiator. The company has souped up the 4×4 workhorse by swapping out its standard 3.6-liter V6 engine with massive 6.2-liter supercharged V8 Hellcat and changing its name to the appropriately bombastic—and Russell Crowe movie-referencing—Jeep Gladiator: Maximus 1000.

“We wanted to create the ultimate Jeep Gladiator,” the company’s founder John Hennessey said. “Maximus 1000—the name says exactly what it is: Badassery on 4-wheels.”

As mighty as the Hellcat engine may be, Hennessey has upgraded the Maximus with 1,000 ponies and 933 pound-feet of torque by adding a stainless steel custom exhaust, ECU tuning, radiator and fuel system. And the alterations don’t stop under the hood. This Gladiator, which features Jeep’s eight-speed automatic transmission, has also been outfitted with a new leather interior, custom front and rear bumpers, 20-inch Hennessey wheels and a six-inch suspension lift.  Finally, just to make sure no one misses such an intimidating beast, the truck’s been topped off with LED lights on the roof and front skid plate.

While Hennessey has yet to release performance numbers for the Maximus, the specs hint at impressive speed. The Ford 150 Raptor, for instance, with its supercharged 5.0-liter V8 engine, is capable of going 0-60 in a more than respectable 4.1 seconds.

“Our clients want exclusive, extreme vehicles that deliver a fun and exciting driving experience both on and off-road,” Hennessey said. “Win the crowd and you’ll win your freedom was the advice that the elder gladiator gave to Russell Crow in the Gladiator movie. We could not agree more!”

As you might expect, winning the crowd with this particular Maximus will come at a cost. Hennessey is offering the pickup, which will have a production run of just 24, for $200,000. After that, buyers will need to wait at least four months to get their hands on their truck, as the company only plans to build two units per month when production begins in July.