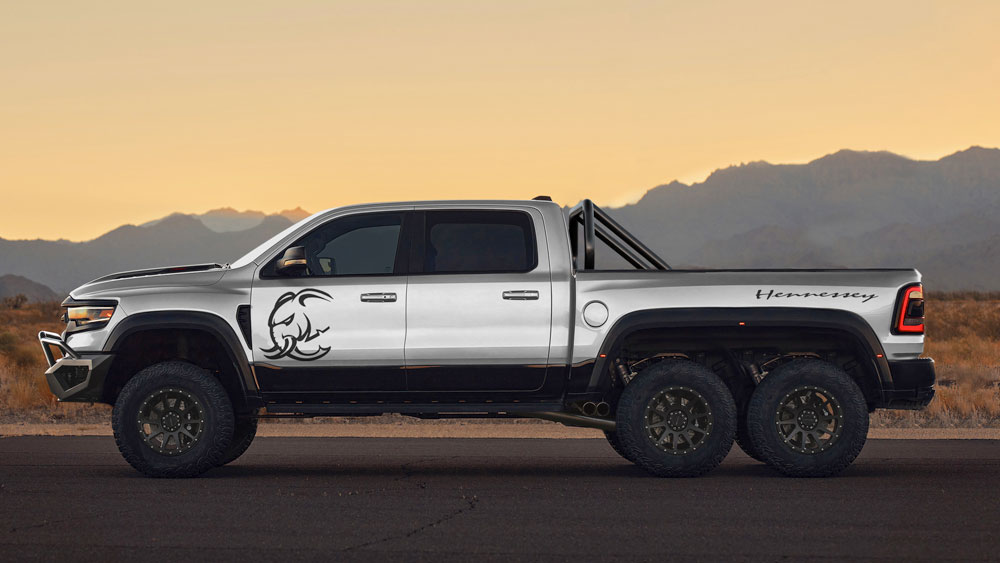 John Hennessey has always been about going big. The Texas-based tuner and founder of Hennessey Performance Engineering (HPE) has souped-up everything from the Dodge Viper to the Ford SVT Raptor and is currently developing the Hennessey Venom F5 with sights set on the production-car speed record. That’s big. But HPE’s latest project is gargantuan—the Mammoth 6X6, the largest and most powerful truck Hennessey and his team have ever tackled.

HPE will start by using the 2021 Ram TRX as the donor model, which normally carries a 702 hp, supercharged Hellcat V-8. As part of the makeover, that power plant will be swapped for a 7.0-liter Hellephant engine modified to generate a massive 1,200 hp. And, as the name suggests, the transformed truck will roll with six-wheel drive.

“The Mammoth 6X6 powered by a 1,200 hp Hellephant motor is just a completely ridiculous idea, which is exactly why we are doing this,” stated Hennessey in his official announcement. But the Ram truck wasn’t initially responsible for the idea to develop such a beast.

“I think that would be the Mercedes AMG 6X6 that came out several years ago,” mentions Hennessey on how he came up with the notion. It’s what inspired us to build our VelociRaptor 6X6, which is based on the Ford Raptor truck.” Of the latter, a Goliath 6X6 based on the Chevrolet Silverado, HPE has already made 15 examples combined. The Mammoth, however, will only see a production run of three vehicles.

One of the biggest obstacles to making the triumvirate will be familiar for the tuner. “Fabricating an all-new truck bed that is compatible with our 6X6 conversion will definitely be our greatest challenge,” Hennessey said. “But we did this before on the VelociRaptor and Goliath 6X6 conversions, so we do not expect this to be an issue for Mammoth.”

Hennessey expects to take delivery of the first 2021 Ram TRX by the end of this year and have a Mammoth ready to debut next summer. Priced at $500,000 (including donor), it will be HPE’s costliest truck offering to date but is sure to see more than a few potential buyers vie for bragging rights. Orders for the three examples will be accepted starting at 1 pm EST on Friday, September 4.