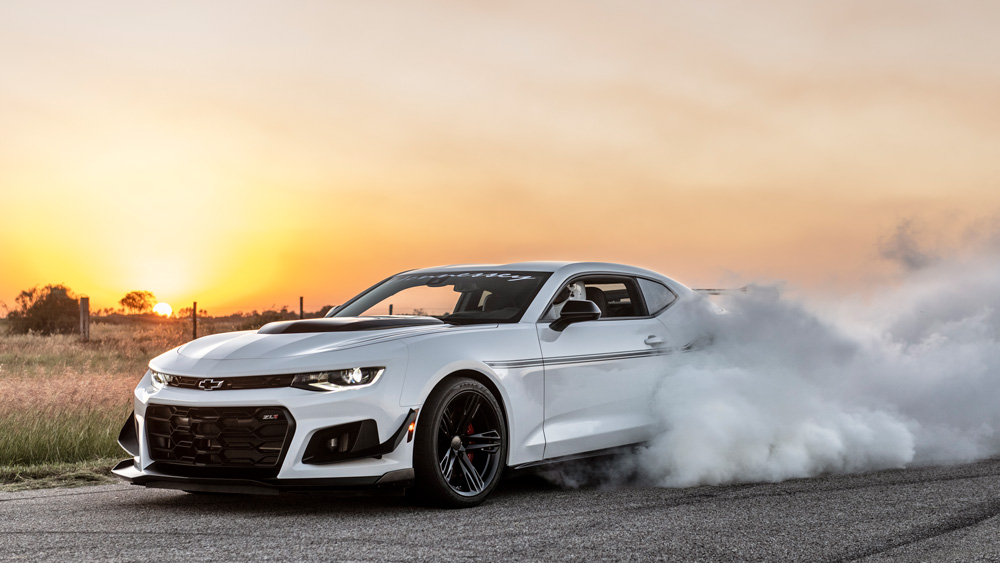 Straight from the factory, the 2020 Chevrolet Camaro ZL1 1LE is an act of God distilled into 650 hp and 650 ft lbs of torque. But can you imagine that there are people on this planet who think that’s still not enough? Well, there are, and many of them congregated at this year’s Specialty Equipment Market Association (SEMA) Show in Las Vegas recently.

One of those people of the “never enough horsepower” mindset is famed tuner John Hennessey of Hennessey Performance Engineering (HPE). The Texas-based company is responsible for one of this year’s more disruptive debuts with the unveiling of the 1,200 hp Hennessey Resurrection Camaro ZL1 1LE.

For most, it’s difficult to imagine what 1,200 hp and 1,000 ft lbs of torque feel like, so let’s turn to the numbers to paint a picture. The Resurrection Camaro is powerful enough to get to 60 mph in less than 2.3 seconds. And it’s even more impressive with its quarter-mile time, needing only 9.3 seconds to eat up 1,320 feet of asphalt, at which point the pony car is already sailing past 150 mph.

Keep your foot buried a bit longer, and the Resurrection should achieve north of 220 mph. Remember, this is an American muscle car we’re talking about.

To turn a stock Camaro ZL1 1LE into a Resurrection, the first thing Hennessey does is remove the engine. Rather than starting from the stock LT4 motor’s 650 hp canvas, Hennessey reaches instead for the 755 hp LT5 engine from the Corvette ZR1.

HPE then massages the LT5 with an uprated intake and throttle body to complement the ported-out factory supercharger. Other upgrades include ported-out cylinder heads, an upgraded camshaft and valve train, larger intercooler, long-tube headers, high-flow catalytic converters, an upgraded fuel system and recalibrated engine software to make all the enhancements play nice with one another.

“We’ve built several 1,200 hp C7 ZR1 Corvettes, so we knew we could deliver this same power level in the ZL1 1LE,” says Hennessey in an official statement for the car’s debut.

But there were still challenges in transferring that Corvette expertise to the Camaro. “The LT5 blower would not fit under the stock hood, so we made a new hood,” notes Hennessey. “Tuning and wiring are quite different, too.” It’s also worth mentioning that the 1,200 hp is achieved with E85 fuel rather than conventional pump gas.

Only 24 examples will be produced.  Photo: Courtesy of Hennessey Performance Engineering.

If you’re looking to get your hands on this maniacal Camaro, you’ll have to act fast. Hennessey is only building 24 examples of the Resurrection, each priced at $200,000. Once all of them are gone, only Hennessey knows if this particular offering will ever be born again.