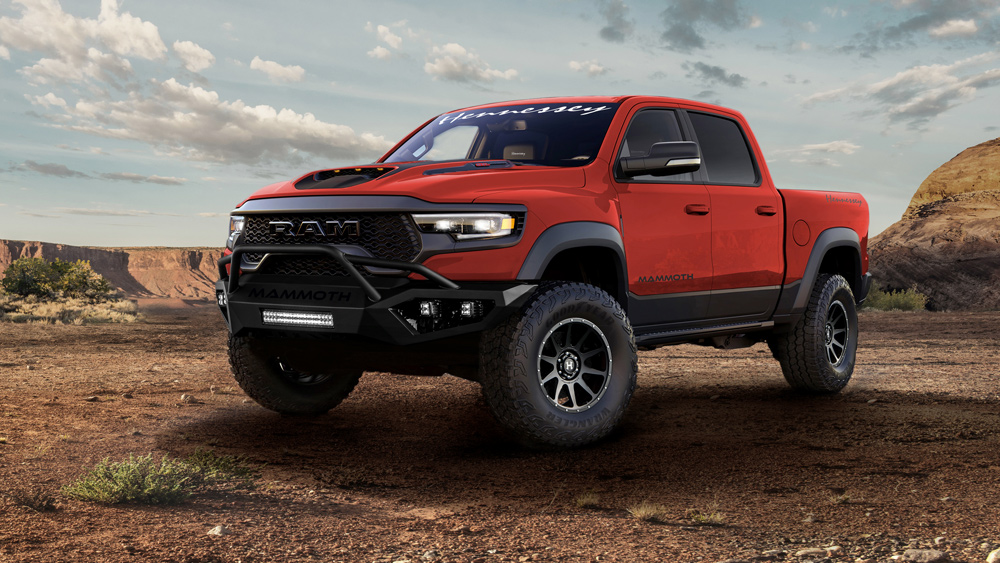 In the truck world, more is usually better. Whether the demand is for bigger, torquier, quicker, taller or stronger, manufacturers are happy to oblige customers looking to be king—or queen—of their respective hills. So are the handful of aftermarket companies that make some of the most popular trucks even more capable by ladling on more power and improvements to on- and off-road handling.

Which brings us to the limited-edition Hennessey Mammoth 1000. The latest creation from Hennessey Performance Engineering (HPE), the new monster is based on the Dodge Ram 1500 TRX pickup truck, Mopar’s full-frontal assault on competition from Ford, GM and Toyota.

According to HPE’s founder and CEO John Hennessey, “The Hennessey Mammoth 1000 is a beast. It is the most powerful truck we’ve ever made, and with its supercharged V-8 engine, lift package and off-road tires, it truly lives up to the Mammoth name. If you want a truck that will take on any terrain and beat a supercar off the line, this is definitely the one.” And while we haven’t driven it, the credentials and specs are wildly impressive—at least on paper. We suspect it’s also a hoot to drive.

The most impressive number is 1,012 hp, the output from the heavily breathed upon, 6.2-liter supercharged V-8, which comes from the factory already making an impressive 702 hp and 650 ft lbs of torque. That power hooks up to the pavement—or the dirt—through an eight-speed automatic transmission and permanent four-wheel drive. But that is only the beginning for HPE, which adds almost a third-again more power than showroom stock to achieve a zero-to-60 mph time of 3.2 seconds—thanks to Launch Control with Launch Assist. That puts the Mammoth 1000 squarely in the arena with some of the quickest sports cars on the planet and makes it an outlier in the world of most workaday pickups.

The Mammoth 1000 would be intimidating with such drivetrain enhancements alone, but Hennessey complements the brutal engine performance with the Mammoth Off-Road Stage 1 package, which adds 2.5-inches of lift to an already towering truck. The package includes a custom front and rear bumper (front with LED lights), 20-inch Hennessey 10-spoke wheels, 35-inch off-road tires and a front suspension leveling kit. Additional enhancements include a retractable electronic bed cover and electronic fold-out steps, an essential accessory for anyone without the leg span of the Colossus of Rhodes.

The Mammoth 1000 production run will be limited to 200 examples in 2021, ensuring exclusivity for a model that is already pretty rare, right off the Dodge production line. Customers can order a Mammoth 1000 through authorized FCA/Ram dealers or directly from Hennessey. Deliveries begin mid-year, at a starting price of $135,350, which includes the 2021 Ram 1500 TRX.