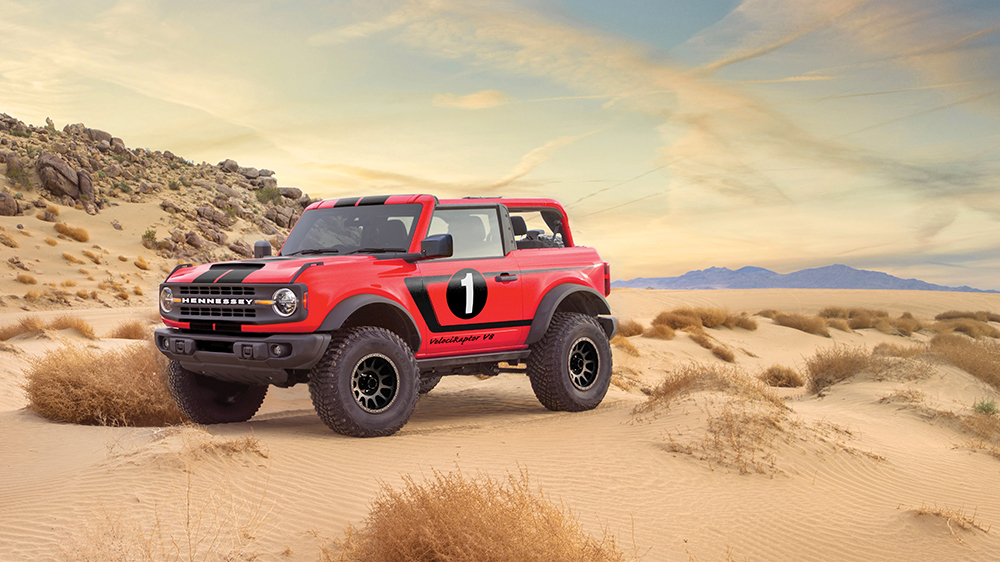 Few vehicles have been met with as much excitement in recent years as the new Ford Bronco. But as exciting as the reborn SUV may be, its power specs aren’t its standout feature. Luckily, Hennessey Performance Engineering is here to fix that.

On Wednesday, the Texas-based custom specialists announced the limited-edition 2021 VelociRaptor V8 Bronco. And the tuner hasn’t just given the vehicle a power boost; it’s more than doubled the SUV’s power.

So how did Hennessey beef up the Bronco? By swapping out the factory engine for a much bigger one. In place of the standard twin-turbocharged 2.7-liter V6 EcoBoost, Hennessey inserted a supercharged 5.0-liter V8 capable of churning out 750 hp at 7,000 rpm. That’s 440 more than the production model’s 310 hp. Mated to a 10-speed automatic, the souped-up engine will help rocket the sporty 4×4 from zero to 60 mph in just 4.5 seconds.

That’s not the VelociRapor V8’s only upgrade, either. The SUV has also been outfitted with a new fuel system, air-to-water intercooler, off-road suspension and stainless steel exhaust. Meanwhile, the exterior has been given something of a makeover, too, with a custom hood with scoop, new front and rear bumpers with LED lights, VelociRaptor V8 racing livery graphics and larger wheels and tires.

Founder and CEO John Hennessey said that the high-performance Bronco was inspired by some of tuner’s recent Raptor builds. “Over the past two years we have built over 70 Gen 2 Ford Raptors for our customers by removing the EcoBoost V6 and replacing it with the same 750 hp supercharged 5.0 V8. I wanted to build the ultimate Ford Bronco for myself and for our customers,” he said in a statement. “The 2021 Bronco may be one of the most highly desired vehicles since the introduction of the Ford GT. We look forward to taking the new Bronco to the next level and beyond.”

Although Ford’s new SUV isn’t available for purchase yet, Hennessey plans to build 24 examples of the VelociRaptor V8 Bronco, in either the two- or four-door configuration. Total cost for the brawny 4×4, including the new Bronco, is $225,000, plus vehicle shipping costs. Hey, with great power comes great cost.