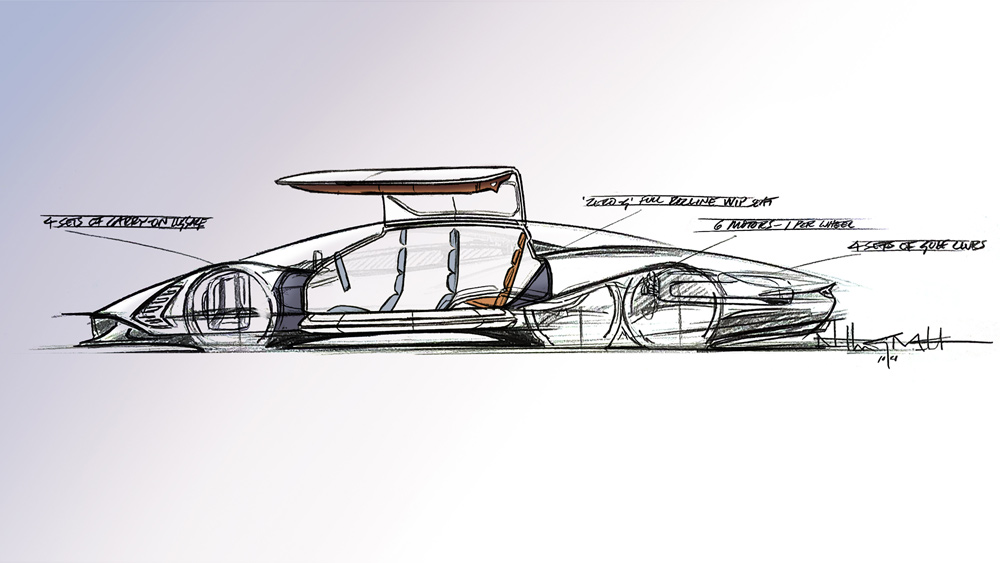 Texan tuner and, now, hypercar maker Hennessey has revealed the first sketches of its all-electric 2,400 hp, six-wheel-drive grand tourer, which it plans to put into production in 2026. And each example will likely be priced at over $3 million.

Codenamed Project Deep Space for now, the new car will feature a cabin that includes a “diamond” seating configuration with a central driving position, two flanking passenger seats and a fourth “VVIP” seat behind the driver that’s capable of folding completely flat.

Two long gullwing doors will provide access to all four seats, with the lower third of each door opening downwards. There will be space in the rear trunk for four sets of golf clubs, and in the front for four carry-on cases.

Hennessey‘s director of design, Nathan Malinick, previously worked for Embraer and aims to bring a private-jet aesthetic and spaciousness to the cabin, with customers able to specify their own bespoke interior trim.

The six wheels will each have their own motor, increasing mechanical grip, which limits the standing-start acceleration of current high-torque electric supercars. Hennessey claims that the new vehicle could be both the most expensive and fastest accelerating EV when it goes on sale.

“I just thought that if four electric motors are good, maybe six are better,” founder John Hennessey told Robb Report. “I guess it will get to 60 mph in under 2 seconds, but this isn’t intended to be a pure zero-to-60 mph or standing-quarter missile. Hennessey mentions that he has a “great respect for cars like the Rimac Nevera, but it’s hard to make a driver’s car from something that weighs 5,000 pounds.” Instead, his solution is “to go to a completely different category of car—the hyper GT—and make a virtue out of the long, low battery you need to deliver a range of over 600 miles.”

The new Hennessey will be built in Sealy, Tex., with an entirely carbon-fiber chassis and a power train from Delta in the UK, now owned by Hennessey’s existing partner Cosworth. Production will be capped at 105 examples over five years, and John Hennessey says he has already taken the first order; one from a current US-based client. His new car will rival the first all-electric Bugatti, which is due before 2030 and is likely to be a four-seat GT or SUV, to differentiate it from the two-seat GTs of its new partner Rimac.

“Bugatti-Rimac is likely to have something in the luxury four-seat EV category,” Hennessey told us, “but I’m pretty sure that this will be the only six-wheel-drive, 2,400 hp car with a diamond-seating pattern from an American company. That’s a pretty unique package. We’ve learned that exclusivity resonates with our customers, and we want to be more exclusive than anyone else in the space.”

Hennessey already offers six-wheel-drive conversions of trucks from Ford, Chevrolet and Dodge, and Mercedes offered a 6×6 pick-up version of its G63 SUV. However, only a handful of short-lived or aborted sports cars and racers have offered six wheels, and most have put four wheels at the front to cut drag and increase grip.

Project Deep Space is the first element of Hennessey’s new ten-year product plan to be made public. Established in 1991 as a tuner, and best-known for its 1,000 hp twin-turbo Vipers, Hennessey is now seeking to establish itself as a carmaker, reducing its reliance on modifying internal combustion–engined cars from major marques as they switch to hybrids and EVs.

All 24 examples of Hennessey’s first hypercar, the Venom F5, have now been sold, with first customer deliveries early next year. At least two more variants of the F5 will follow, with the first being revealed early next year as well. It will stay in production until 2025, but Hennessey says fewer than 100 will be made in total.

Two more all-new models will follow Project Deep Space by 2031. But Hennessey isn’t giving up on gas completely: the last car in the plan, due by 2031, is expected to be powered by a pure internal combustion engine.