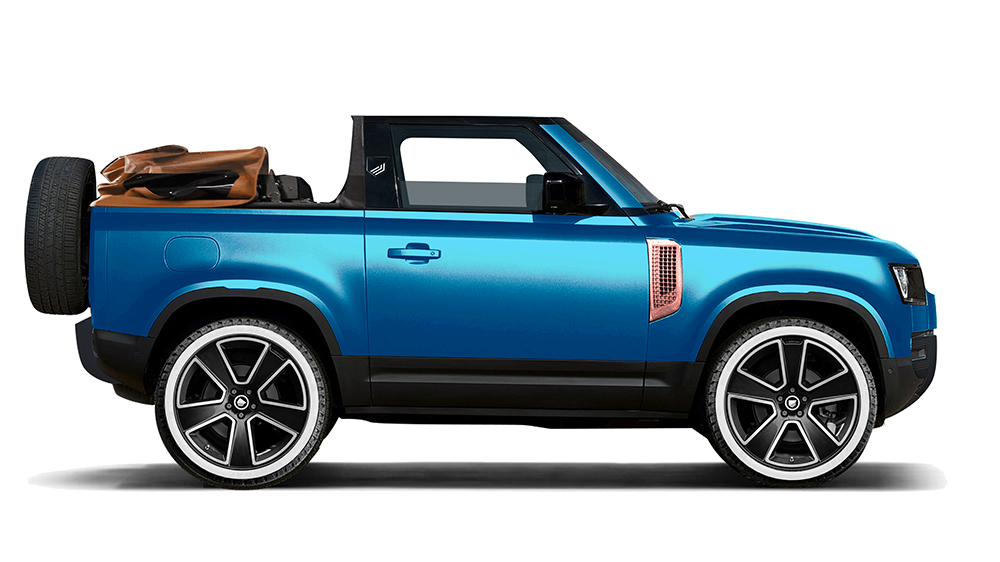 It’s never too early to start preparing for summer.

If the cold heart of winter has you longing for some sunshine, Heritage Customs has just what you’re looking for. The Land Rover specialists have just unveiled their latest limited-edition Defender build—the Valiance Convertible.

Up until now, one of the major issues with the second-generation of the British marque’s beloved 4×4 has been the lack of a model with a retractable soft top. So, Heritage Customs decided it would build one its own. The Netherlands-based shop has taken the two-door Defender 90 and chopped off its roof and everything above the doorline past the B pillar. The result is a true convertible, with a cloth covering that can be fully lowered anytime you want to catch some rays and feel the wind through your hair.

The Valiance Convertible only exists in design sketches and renders at the moment, but it will be available in three different trims at launch, according to a press release. The first is the Côte d’Azur, which was inspired by the beaches of southern France. It has a bright blue finish with black bumpers and rides on a set of 22-inch wheels wrapped in white-wall tires. Up next is the Solihul Sand, which was inspired by the first production Land Rover from 1948. It has a green paint job, grey bumpers and copper accents. Finally, there’s the Kokkini Paralia, which is meant to evoke Red Beach on the southwest coast of Santorini. It’s coated in a matte dark red, has black bumpers and rides on a set of 22-inch Supersonic wheels. Each variant has a Spinneybeck leather interior, Magic Metal accents and, of course, the retractable cloth top.

Heritage Customs announcement doesn’t include powertrain details for the Valiance Convertible. That could mean that you can have the vehicle equipped with any Defender 90 engine, including the top-tier 5.0-liter supercharged V-8 that pumps out 518 horse and 461 ft lbs of twist. That would be more than enough for a day at the beach. And then some.

If you’d like to see the convertible off-roader sitting in your driveway come summer,  reach out to Heritage Customs now. For now, the shop intends to build only five examples of stylish drop top. Pricing starts at $157,000 before applicable fees.