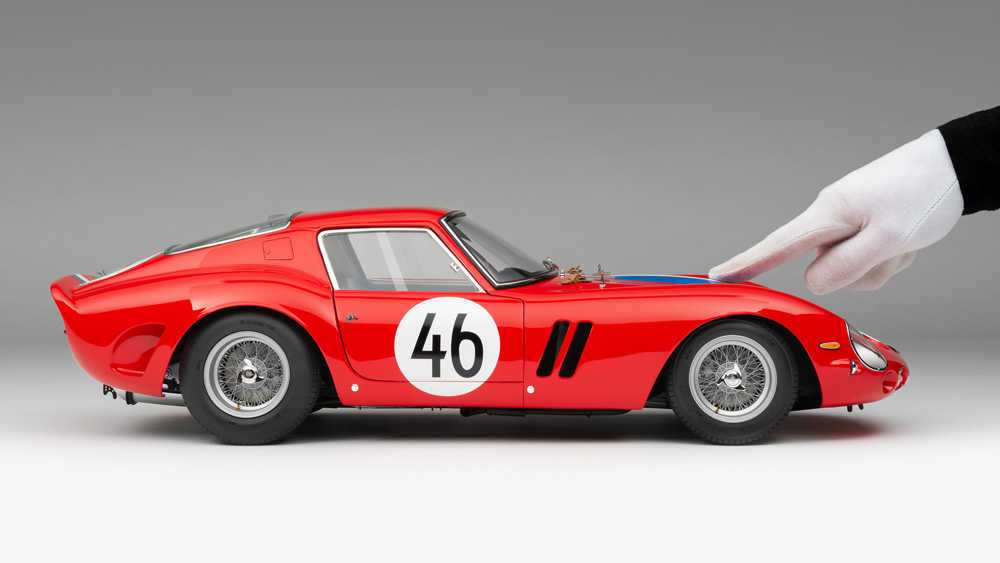 “A fine car model is like a song. It can take you back to a specific point in your life, like a race,” says Kurt Carlson, of Gig Harbor, Wash. “To me, models are more than an object. They are an emotion.”

Carlson was 14 when Niki Lauda suffered his epic crash at the Nürburgring in 1976. At the time, the racer was in the 12-cylinder, championship-winning Ferrari F1. Carlson was already an F1 and Lauda fan, reading everything about the legendary mid-1970s races—an era more recently celebrated in the movie Rush.

“Now it’s on my wall,” says Carlson, referring to his two-foot, exact replica of Lauda’s Ferrari 312 T2. Other pieces in Carlson’s collection include a 1:4-scale, four-foot-long Ferrari F1 and 20 different 1:8-scale models that include a Ferrari 250 GTO. (The 1:8 are the two-foot models, often considered the gold standard in the fine model world.)

Lest you think Carlson is an exotic-car wannabe, he also owns real Ferraris that include the 488 Pista and 812 Superfast. His zeal simply extends to models, which not-so-incidentally include exact reproductions of his own cars, right down to the interior seat stitching.

Collecting model cars? It’s a bigger pursuit than you might imagine, at least among automobile aficionados. Put away thoughts of a Hot Wheels grab-bag carted around in a rolling plastic storage case. These 1:8 replicas are hand assembled and usually start in the low five figures. One-off special orders can run to $85,000.

“They’re like mechanical watches, real craftsmanship in a digital world,” says Carlson. “Models let me have cars that I could never own.” Advocates include watchmaker extraordinaire Richard Mille, who puts them in his showrooms, and Rob Dyson, former race-car driver and owner of the Dyson Racing team.

In Dyson’s case, all of his models are of significant race cars, including the Lauda Ferrari. And yet, well, he owns real race cars. “The advantage of the models is that they are easier to move around and don’t require any maintenance,” notes Dyson.

As in many collecting enterprises, only a small niche of makers quench the thirst. Many companies around the world produce smaller and less complicated 1:18 and 1:24 scale models. And there are private individuals that produce 1:8 models in extremely limited numbers. But England-based Amalgam Collection is the key player. It produces around 1,000 models per year, and has relationships with major OEMs like Ferrari, Bugatti, and Aston Martin. If you’re buying a 1:8 model car for thousands of dollars, chances are it comes from Amalgam.

A 1:8 scale replica of Michael Schumacher’s Ferrari F2004 that he drove to victory at the San Marino Grand Prix.  Photo: Courtesy of Amalgam Collection.

“The target is to produce a model that looks exactly like the real car,” says Sandy Copeman, the company’s director of brand. “There should be nothing that gives the game away.”

The undertaking to achieve that authenticity is daunting. Details are so precise that a classic Ferrari model might have 72 spokes on its wheels. Amalgam often gets specifications and even CAD drawings from the manufacturer or, in the case of vintage or collector cars, measurements are taken from digital scans and photos.

Master components are then individually created, a process that takes between 2,000 and 4,500 hours, says Copeman. After that, casts are taken from those patterns. When that step is done, there are hundreds of resin-cast pieces that need to be assembled and painted by hand. (The company has factories in England, Hungary, and China.) Final assembly of the model by hand usually takes 200 to 450 hours.

There are different levels of builds, which influence the price. The simplest have no interiors and blacked-out windows. The priciest include sumptuous interiors and functional parts: the doors, hood, trunk and gas cap actually open, for example.

Many clients, like Carlson, have their car’s specs matched to a model that Amalgam has already created, but if you want to commission a unique model that isn’t in the company’s portfolio, the prices get truly high.

“I know the Amalgam cars are expensive,” says Carlson. “But I don’t know how they make money with the amount of labor hours going into each one. They must be the true enthusiasts.” Carlson, for his part, had custom black-and-gray cabinets built in his garage. The models hang vertically so you can see the insane details on the open-cockpit F1 cars. Many are autographed by the likes of Carroll Shelby and the elder and younger Dale Earnhardt. “It looks like a museum,” admits Carlson. “Most of my friends love it. Some just shake their heads.”

Tim McMann is another collector who likes to own mini versions of his real cars. McMann, who lives in Portland, Ore., has a 1:18 scale model of each of the last six cars he’s owned, starting with a humble 2002 BMW X5 and moving to a Ferrari GTC4Lusso that’s slated to be delivered within weeks (the actual car, not the model).

The love of cars—and the trickle-down effect of model collecting—began early for McMann. He owns a 1:18-scale 1963 Corvette with personal significance. “I still remember walking towards a Cities Service station when I was about nine years old and seeing a real one for the first time. It was that moment when I became a dyed-in-the-wool car guy. I still get goose bumps when I see a ’63 Corvette coupe.”

McMann has more than 200 models in his collection and, “by necessity,” they are all over the house. “Every model is in an individual display case, like the Amalgam Jaguar E-Type “Car Zero” and the Amalgam Bentley Blower,” he mentions. “It didn’t take long to learn that dusting these things is an impossible task. You just have to protect them and handle them as carefully as possible.”

Asked if anyone actually plays with their cars, Amalgam’s Copeman pauses. “There’s not a lot more you can do with them without taking enormous risk. You could scoot one across the floor if you were crazy enough to do that, but I’ve never seen it done.”

The other type of client, Copeman says, is the “high-end, classic car owner who has a garage stuffed with 50 cars.” Those collectors hail from all over the globe, including the US, the Middle East, and Russia. “We really know our high-end, high-profile clients. We see them at the events [like Pebble Beach].” One client, according to Copeman, loses interest in a scale model the moment he sells the actual vehicle.

Obviously, the world has recently changed and many people are hesitant to buy luxury objects. But Copeman says Amalgam has actually seen an uptick of interest. “We’re up against it at the moment,” he states. “We’re facing ongoing issues of logistics and delivery. But I don’t think we’ll have a problem in the long run. We’re seeing an increase in online sales and inquires. Our clients are cash rich and time poor. Right now, they’re at home, and they’ve got the time, and they’ve got the cash.”