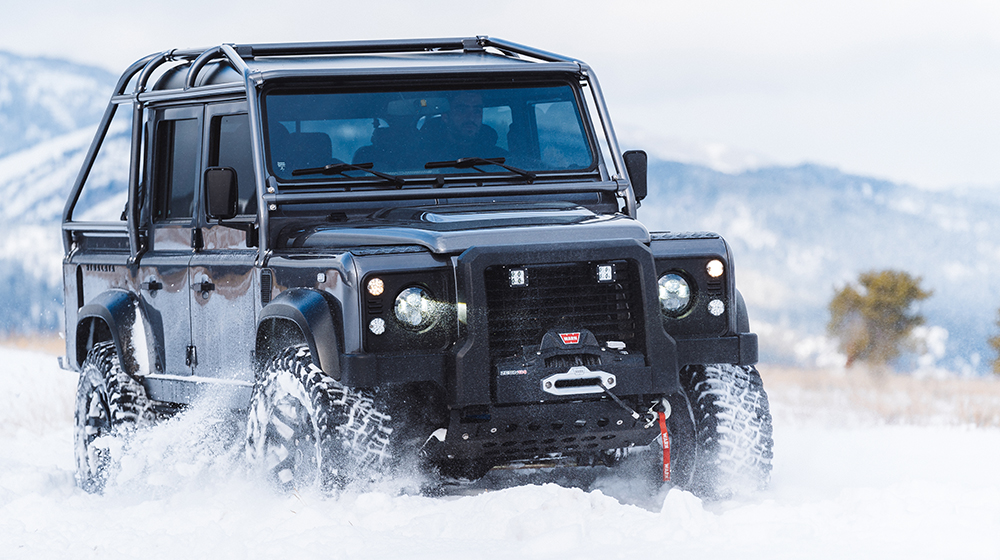 Himalaya is at it again. Since the debut of its James Bond-inspired Spectre Defender last summer, the custom shop, which specializes in contemporary sport utility vehicles modeled after classic Land Rovers (built utilizing contemporary Land Rover body panels), has just unveiled its latest one-off creation: a terrain-conquering 110 Crew Cab that delivers on all fronts.

“This vehicle is something that we all hoped Land Rover would’ve done with the Defender in some ways,” says Greg Shondel, president of the South Carolina–based Himalaya. “You jump into and you feel like you’re rolling off a [contemporary] Land Rover lot. It’s just very refined; it feels very modern.”

Like every Himalaya build, this 110 Crew Cab, which carries a $250,000 price tag, begins with a custom-made chassis upon which an authentic Land Rover frame is attached. The fact that it bears a striking resemblance to vintage Land Rover models is not surprising, nor is it a coincidence. After all, as Shondel explains, for decades Land Rover remained incredibly consistent with the shape of its frame and body panels. “You can take the doors off a 2015 model,” he says, “and bolt them onto a 1988.”

Equipped with a new LS3 Corvette performance engine capable of producing more than 525 hp and 495 ft lbs of torque, Himalaya’s latest build can go where even other Land Rovers can’t. The custom shop’s team of technicians and mechanical engineers recently experienced this during an off-road test run in upstate New York, where they intended to put the 110 Crew Cab through its paces. “As a company, we like to push it,” Shondel says. “We took this one off-roading with the intention of finding weak points, and we had to pull our support vehicle—a Land Rover Discovery—out of a ditch a few times.”

In addition to that high-powered crate engine, this Himalaya Defender also boasts a modern suspension and an advanced braking system to harness all that power. “Of course, we want to make trucks that look amazing,” says Shondel, “but we want them to be truly drivable on and off road. Suspension and brakes are what keep our team up at night.”

That being said, one of this Defender’s more impressive traits is its ability to block out the unwanted noise that inevitably is produced when so much power and capability—not to mention large all-terrain tires—are put to use. The vehicle’s interior surfaces have been sound-proofed and outfitted with Dynamat; and after extensive decibel testing the Himalaya 110 Crew Cab performed as well on open roads at 70 mph as most modern SUVs. “We wanted to hold them to higher standards with that fit and finish,” Shondel says of all of his team’s creations.

Although this 110 Crew Cab is one of Himalaya’s spec builds, the company has reserved areas where customers can tweak it—adding axillary flood lights, for example, or personalizing bumper designs. Says Shondel: “We left a few things for the customer, so someone can come in and make it their own.”