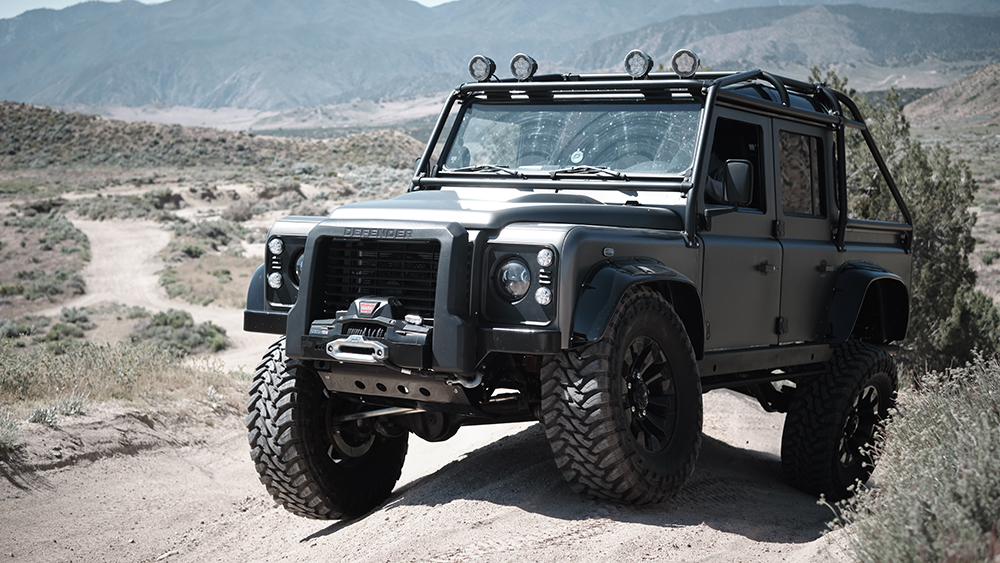 If a utility vehicle is tough enough for James Bond, chances are it’s more than tough enough for you. And now you’ll have the chance to find that out for yourself, as Himalaya is selling a limited-edition customized Land Rover Defender modeled after the very one the British super spy drove in 2015’s Daniel Craig-starring Spectre.

Dubbed the Spectre Defender, the fearsome all-black 4×4 combines the best of classic British styling with cutting-edge American mechanics, like all the company’s bespoke vehicles. This example, in particular, is built upon an all-new frame with fresh body panels, all of which were sourced from the UK, and is powered by a brand new, beefy GM LS3 engine.

That new engine takes the place of the Spectre’s stock 1961-designed Buick/Rover 3.9-liter V8. The new engine may be the same size, but its dramatically more powerful, upping the horsepower from an out-dated 182 to an impressive 525, according to Himalaya. While that is more than enough punch to propel the vehicle’s oversized 37-inch Toyo tires over the toughest terrain you can throw at it, there are two other engine options—a Cummins R2.8 turbodiesel and Whipple-supercharged LS3—for anyone looking for a little more juice.

Himalaya has also outfitted the Spectre with a GM six-speed automatic transmission, which has been integrated between the engine and the newly rebuilt Land Rover all-wheel-drive transfer case. Other upgrades include strengthened axles, a premium Brembo braking system with larger Wilwood discs and a fortified suspension system, while the entire vehicle has been given a 4-inch lift to make room for those new heavy-duty tires.

Just as impressive as the Spectre’s new innards is the care and attention paid to the body. The exterior has been reworked to create a slant-back affect, which is achieved in part because a Safety Devices exo-cage and Front Runner Vehicle Outfitters roof rack. A new A-bar-style winch bumper has been added, along with a radiator skidplate and Power Step sideboards, just to name a few design additions. The vehicle has also been outfitted with an LED lighting package. Also well-appointed is the all-leather interior, which features Recaro seats, Dakota Digital Guages, a Momo steering wheel, a Safety Devices rollcage and a premium entertainment system.

Of course, since this is a vehicle fit for 007, it comes at a price. Himalaya is selling the Spectre Defender for $250,000, though that’s relatively reasonable given that their vehicles usually go for between $165,000 and $250,000. Check out more photos of the Spectre below: