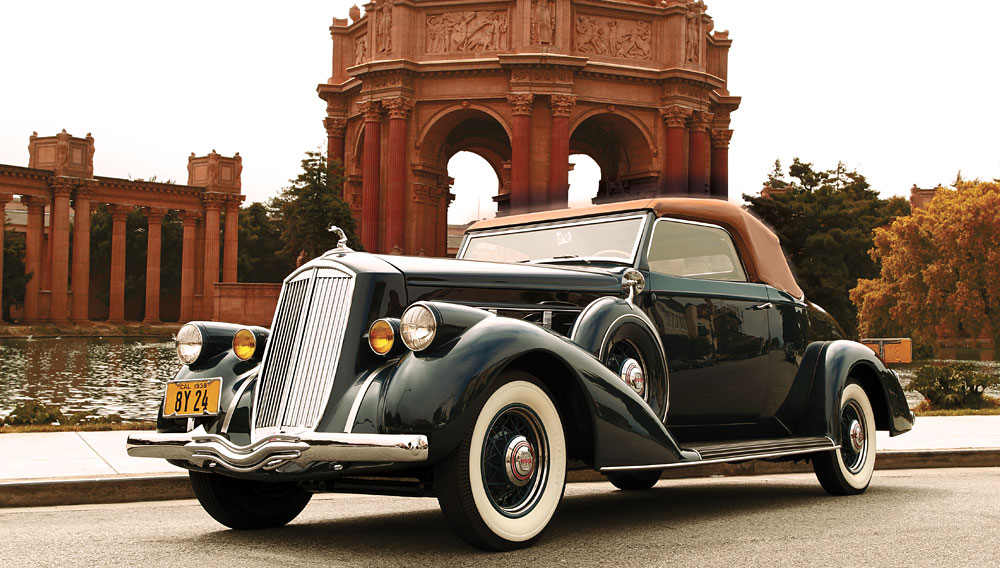 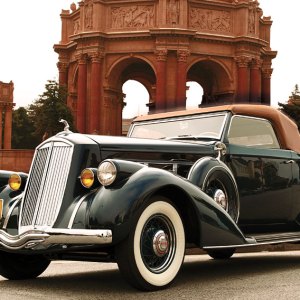 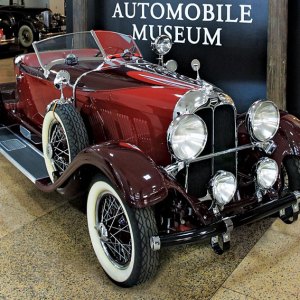 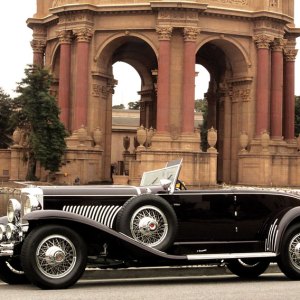 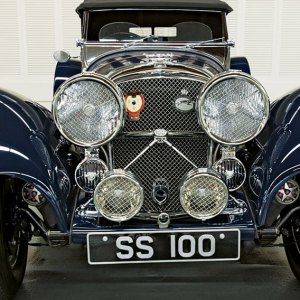 At many colleges across the country, it would not be an uncommon assignment to analyze F. Scott Fitzgerald’s quintessential work, The Great Gatsby, studying its characters, themes, and the story’s commentary on Roaring Twenties society. The Academy of Art University in San Francisco takes a different approach to studying that era. There, students enrolled in the school of industrial design are more likely to study the flowing lines of various custom coachbuilt automobiles built during the novel’s era—grand touring convertibles that would have appealed to the discerning taste of Fitzgerald’s tragically flawed protagonist. Unlike industrial design students at other universities, however, the Academy of Art students are not limited to studying photographs or reference books. Instead, they can visit the school’s 7,000-square-foot auto museum to study the cars in person.

The auto museum is the achievement of Richard Stephens, the school’s former president, who has devoted much of his adult life to building the collection of more than 200 automobiles (the museum displays only a third of the ever-growing collection). Jay Gatsby may have been doomed by his obsession to want to relive the past, but Stephens is hoping only to preserve it. “I’m trying to open our students’ eyes to how fabulous the design and integrity was in the [1920s and] ’30s, as the country became the great thing that it is,” says the 88-year-old automotive enthusiast. “We want our artists to be great designers, so they can do anything. I’d like them to have a pride in beautiful things and to care for beautiful things, because if we’re not careful, we’ll lose our history. Who knows what’s going to happen to these cars; you can’t replace them.”

To understand the collector’s approach to these classic automobiles, one must look back to the end of the Roaring Twenties—a time when the Art Deco movement emphasized bold geometric designs and when automobiles were valued for their imposing size and ornate details. Stephens was 6 years old when his parents moved from the Left Bank in Paris to California and quickly purchased their first car. As Stephens explains, his father studied art in the French capital for three and a half years, but automobiles weren’t prevalent in the city at that time. “The first thing that my parents did was buy a 1930 Buick,” he recalls. “[I remember] Sunday drives that we’d take, [sitting] on mole hair upholstery with my old man putting on the hand brake to shift. All of that’s etched in me. I knew then that my passion was automobiles. I loved cars from that moment on.

“You think of those great automobiles and the great people who designed them; they’re fabulous artists,” he continues. “Look at what that man [Raymond] Dietrich did. There are no shortcuts there; it’s all integrity. It’s a beautiful thing, like looking at a letter from the Civil War, at how beautiful the penmanship was and the command of the language that they had. You look at a Model A and you think of the man turning those things out and what a dream, what a thing to do! That’s what I see when I see those cars and I think that the students get that through osmosis.”

Stephens was approaching his third decade as the university’s president when he began to notice an unsettling trend taking root in the automobile industry. “He just had a feeling that the new cars were losing something, that they didn’t have the soul that they used to, and that we needed to do something about it,” says Wayne Barnes, the museum’s director.

By this time, Stephens had already amassed a noteworthy collection of automobiles, and after some deliberation he realized that the solution that he was searching for was right in front of him. By relinquishing his individual ownership of the collection and bequeathing it to the university, he would enable the professors and students to tap into the cars as educational resources as often as they liked. Gradually the university purchased additional buildings in which to expand, and soon the school bought a large building at the corner of Van Ness Avenue and Washington Street. As a kid, Stephens would take drives with his family along Van Ness, which at that time was known as automobile row, and he remembers coasting by the dealerships that displayed gleaming new Chryslers, Buicks, and Packards in their showroom windows. With this large building—a former auto dealership—now part of the university’s campus, the next step was an obvious one. Stephens turned the space into a museum to display his collection and, in the process, he returned dozens of American classic automobiles back to their rightful place (at least as it pertained to his childhood memories).

Stephens was never concerned that he might be the only person who recognized the downward spiral of contemporary automotive design. Instead, he knew that by exposing more people to the classic automobiles that he loved, by allowing them to run their fingers over the curved body panels, to sit in the driver’s seat, and to view the cars as three-dimensional and functional works of art, that the people would come to that discovery on their own. “You see it in the craftsmanship of these cars of the ’30s, you feel the man or the woman who worked on that car. You know that it has a human touch there, and that’s what seems to be missing from some of our cars now,” he says. “I feel the robot, I don’t feel the man.

“I want those things to come to life and I want them to say something,” he continues. “I look at the promise of a beautiful automobile and I say, ‘please, tell me what you know.’ The truth is, if you want to be a damn good automotive designer, you have to know a lot about cars, the histories and the mechanics. If you want to design cars, you have to know cars; that’s what we’re doing here.”

For Barnes, proof of the program’s success is evident in the interaction that he and Tom Matano, the executive director of the school of industrial design, have with the students. “The one thread that ties us together is our love of cars,” he says. “A student who’s much younger than we are might not see things the same way that we do, but using something that we both have a passion for, it’s easier to connect.”

Similarly, both Barnes and Matano acknowledge that most students learn the lessons and facts and absorb the general principles and history of automobile design through their own interactions with the vehicles. Those lessons are more impactful than any that could be gleaned from a textbook or a lecture. “There’s something about being behind the wheel; it’s almost like the cars love you back,” says Barnes. “Sitting in the cars and smelling them and touching them . . . that car will take you back in history by itself. Each one of them can tell its own story. You have to be able to touch the past; ideas come that you wouldn’t have been exposed to. There are always styling cues that you can use in a new car, and it’s always great to see where they came from.”

“You can see the sense of scale and the presence of each vehicle and you can sit in it and look at the gauges and you can see the change of times from the ’30s, ’40s, and ’50s,” Matano adds. “You never get to see those things in photographs or in books.”

Matano previously spent almost two decades at Mazda and was the lead designer responsible for the company’s Miata, which debuted in 1989. Bringing that real-world experience to the school, Matano often proposes hypothetical situations to his students, which require them to analyze the classic cars in the university’s collection. “We pick a brand, like Duesenberg, and ask, ‘What if we brought it back today, what would it be like?’” he explains. “They go down to the collection and try to imagine bringing that feeling back.”

While the exercise may sound like an intellectual challenge reserved only for a university setting, Matano insists that it has real-world applications. “If you understand the history and [you can] interpret it into modern materials and modern manufacturing, you can capture that into today’s world,” he says, adding that the department also plans to introduce classes dedicated to restoration services in the near future.

It’s not often that a car collection has such a direct connection to an educational institution. Naturally, such a relationship changes the collector’s approach; acquisitions are made with the best interests of others in mind. But as Stephens explains, that can be a blessing. “I never think in terms, did I get a good buy?” he says. “I’m thinking in terms of how valuable the knowledge in this car is to the students that we have because they’ve never seen these cars.

“You have those people who only think of profit—‘I’ll buy it for this and I’ll sell it for that,’” he continues. “We don’t think of that at all. We ask, is it a great design? Did it make a statement? That’s what we’re focusing on; I’m focusing on the integrity and the loveliness and the lines of those designs. The honesty of those cars is what appeals to me.”

Stephens and Barnes also have spent the better part of a decade participating in major concours events, like Pebble Beach, but those experiences, too, differ from what a private collector might encounter. As Barnes explains, it has nothing to do with the competition. “We’ve shown more than one car at a time at Pebble for exactly the reason why we have our collection,” he says. “We end up at those concours a lot of times helping them to tell the [automobile’s] story, to have them share those cars with people. It’s an extension of our school, really.”

Because Stephens and Barnes are acquiring cars on the merits of the model’s design and not necessarily for the rarity of a specific example, they often have an easier time finding a car that fits their criteria. A discerning private collector may only want the very best examples of a specific model, whereas the academy can approach an auction with greater flexibility. That’s allowed them to grow the collection at a more consistent rate. However, that’s not to say that the institution is without its challenges. “It started out in the 1930s and now we’re up to the ’60s,” Matano says, explaining how the collection has grown to convey the automobile’s evolution. “The problem with the ’70s and ’80s is that all cars were mass-produced, so the selection becomes much tougher.”

Barnes grapples with another problem, though he admits that it’s really not a bad one to have. Given the size of the collection, he says it’s all but impossible to choose a favorite car. “They’re all so beautiful in their own way,” he says. “When you’re in their presence, you fall in love all over again. It happens to me all the time.”