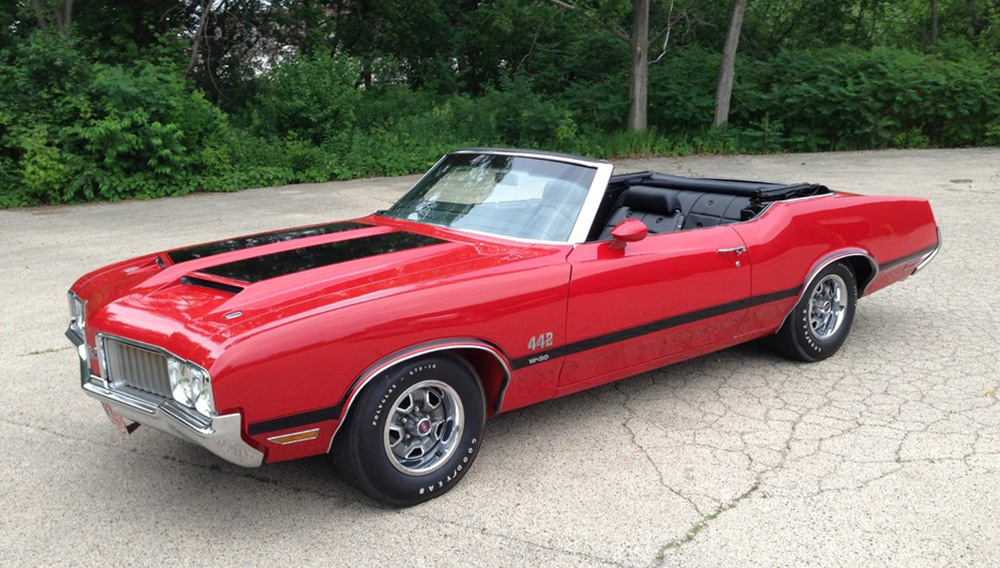 While Oldsmobile is believed to have created the first true American “muscle car” with the release of its 303 V-8 Rocket 88 in 1949, it was not until 1964 that it returned to the concept with the 442 option, derived from the “Police Apprehender Pursuit” package on the intermediate F-85 Cutlass. Signifying the car’s four-barrel carburetor, four-speed manual transmission and dual exhaust, the ‘442’ designation announced a serious performance car with a unique combination of blistering performance and upscale panache. A major restyling for 1968 introduced a handsome new aircraft fuselage-inspired design theme and that year, the 442 gained new status as a separate series within the Oldsmobile model line-up.

From 1966, the ultimate performance 442 was equipped with the optional W-30 performance package including a highly efficient cold-air intake system, high-lift, long-duration cam, and many more carefully engineered modifications. For 1970, “Dr. Oldsmobile” unleashed the ultimate W-Machines with the massive 455 cubic-inch V-8 now available. Advertised at 370 under-rated horsepower and delivering a 500 foot-pound torque wallop, the new W-30 442s gulped fresh air through the new W-25 – Forced Air Induction system with the twin-scooped Outside Air Induction (OAI) fiberglass hood. In addition to all the high-performance wizardry, W-30 engines were carefully assembled using Olds’ Select Fit process that was in essence factory blueprinting with internal components matched by size and weight. The extra care paid off, with W-30 442s storming the quarter-mile with ETs in the high-13s at over 100 mph from the showroom floor. Capable of taking on and beating the quickest and fastest cars of the day, the W-30 442 did it with braking, comfort, handling, and style to match its formidable performance.

Three 442 body styles were available, including the Holiday Hardtop, pillared Sports Coupe, and top-of-the-line Convertible. Of all, the rarest are the 96 Convertibles built for 1970 equipped with the top W-30 high-performance option and 4-speed manual transmission. While all survivors are extremely collectible and desirable today, this 4-speed, W-30 Convertible is rightly and well-known to collectors and enthusiasts as “The Holy Grail” due to its amazing originality and ironclad documentation. Firstly, as a later-production W-30 Convertible, it carries the ‘W-30’ designation on the factory-issued production broadcast card, unlike the earlier-production cars for 1970, which do not.

Known history from new includes this Matador Red W-30 Convertible’s sale at Warren, Michigan’s performance-oriented dealer, Key Oldsmobile to the original owner. In addition to the W-30 option and Muncie M21 4-speed manual transmission, this 442 Convertible was further equipped with the optional upgraded sport steering wheel, Rally Pac gauges, and 3.91:1 limited-slip rear end. The first owner retained it until 1973, when it was sold at approximately 24,000 miles. The second owner subsequently purchased a new home and placed the rare W-30 into storage there in 1976 after only an additional 15,000 miles of use. The car remained hidden from the world there for the next 28 years until 2004, when it was rolled outside – still on its original Uniroyal Tiger Paw tires – and sold to a local police officer and a partner, through whom this amazing garage find passed to a high-profile collector. Steve Minore, the recognized expert in 1968-1972 Olds restoration and documentation, to painstakingly clean the car and go through the mechanicals. During the process, Mr. Minore confirmed the 442’s drivetrain had never been tampered with. He has provided a detailed report known as the ‘Rocket Report’ as well as a certificate of authenticity. The factory broadcast card with the all-important ‘W-30’ designation found on it, was found under one of the seats. Further proof of the car’s status was provided by an assembly-line sheet used by an assembly-line worker and/ or inspector with both “W-30” and “4 speed” notations on it. The current owner of the car, a noted expert and collector himself, states that he has never seen a similar handwritten sheet listing both key options in another 1970 W-30 car.

Documentation, originality, quality, and rarity – this extremely rare 4-speed, W-30 Oldsmobile 442 Convertible has it all. Recently, it was one of the featured subjects on the cover of the November 2015 edition of Muscle Car Review, with its story titled “Holy Grail in Hibernation.” Deserving of its title on all levels, this incredible 4-speed W-30 Convertible now stands ready to take pride of place in a worthy collection of the fastest and finest American performance machines ever created.